A smiling couple in their 70s, sitting on lounge chairs, overlooking a sun-soaked ocean from the beach. A gentle breeze, margarita in hand, waves ebbing and flowing as the soundtrack. They look…content. A chyron rolls across the bottom of the screen: Begin your retirement savings account today.

Or: The same man mopping the floor at Starbucks. He holds his lower back after a long day serving entitled customers their ridiculous orders. The man looks at his watch as his millennial boss approaches. Boss shakes his head “no” while pointing to the mop and bucket in the corner. The bathrooms haven’t been cleaned. The same chyron appears.

This question lies at the heart of a new study, published in the Journal of Consumer Psychology, by David Hardisty at the University of British Columbia and Elke Weber at Princeton University. The researchers wanted to know whether anticipation of a positive event inspires action more than anticipation of a negative event. In the case of retirement savings plans, it did.

The team conducted three studies while using a dozen supplemental studies to support their article. It begins with a definition.

“Lab studies of intertemporal choice typically find the desire to have good things immediately is much stronger than the desire to postpone negative outcomes … The difference in time preferences for positives versus negatives has been called the ‘sign effect.'”

Research tends to conclude that we want a yummy snack immediately but prefer to delay paying our bills. This seems to make intuitive sense, but the researchers wanted to dig deeper into the role of anticipation. The investigation considers two theories that explain sign effect.

The Science of Productivity and Motivation | Dan Arielywww.youtube.com

Anticipation asymmetry. “Anticipation pushes against our natural tendency to want good things now and bad things later.” We’d rather get negative experiences over with to avoid the dread of waiting. Yet this desire is not as powerful as wanting positive experiences immediately.

Subjective magnitude. We weigh negatives twice as heavily as positives. This is similar to loss aversion: We prefer avoiding losses than acquiring equivalent gains. Loss aversion focuses narrowly on losses and gains, however, while subjective magnitude broadly considers positive and negative events.

Five days of Facebook ads were purchased to measure responses to two retirement fund campaigns. One featured a tropical beach; the other was more dreadful. As anticipated, the latter won out.

“We found that an advertisement emphasizing the anticipation of future expenses was the most effective.”

The next study gauged enthusiasm for purchasing eyeglasses. The control in both groups was immediately paying for the glasses. Volunteers were given the option to either receive a rebate in one month or have an extra month to pay off the bill. The choices: 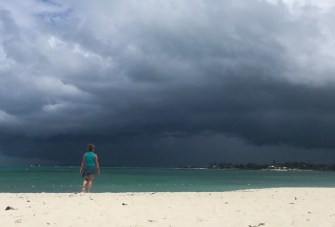 A woman walks on the beach as a storm approaches in Nassau, Bahamas, on September 12, 2019.Photo by Andrew Caballero-Reynolds / AFP via Getty Images

Finally, 168 undergrads took part in a jellybean eating study. This was an involved study, with questionnaires given at various stages of decision-making. The gist: Would you rather eat a jellybean now or put it off? The choices: a delicious chocolate donut with sprinkles-flavored jellybean or a disgusting vomit-flavored jellybean.

In both cases, volunteers ate the jellybean quickly, though for quite different reasons.

Negativity bias is a powerful motivator, as plenty of research on modern media has forced us to confront. The question is: can you use dread as a motivational tool to accomplish tasks more quickly? That idea was put forward at Fast Company.

“Don’t want to do something? Tell yourself that it will be horrible. The worst. A godforsaken burden.”

Strong language, perhaps, but the theory is intriguing. As the study shows, immediate gratification is more strongly woven into our DNA than dread. Yet dread can be a motivational tool as well. Cognitive reframing can stop procrastination in its tracks.

Some media outlets are infamous for presenting doom and gloom to keep consumers anxious. We don’t have to go that far. But if the fears of mopping at 75 motivates you to start saving today, the likelihood you’ll get to that beach appears more likely to happen. Dread can be a force for positive change.