Coleslaw: It's the Most Important Thing on Your Plate

Like a culinary canary in the coal mine, coleslaw can tell you everything you need to know about a restaurant. 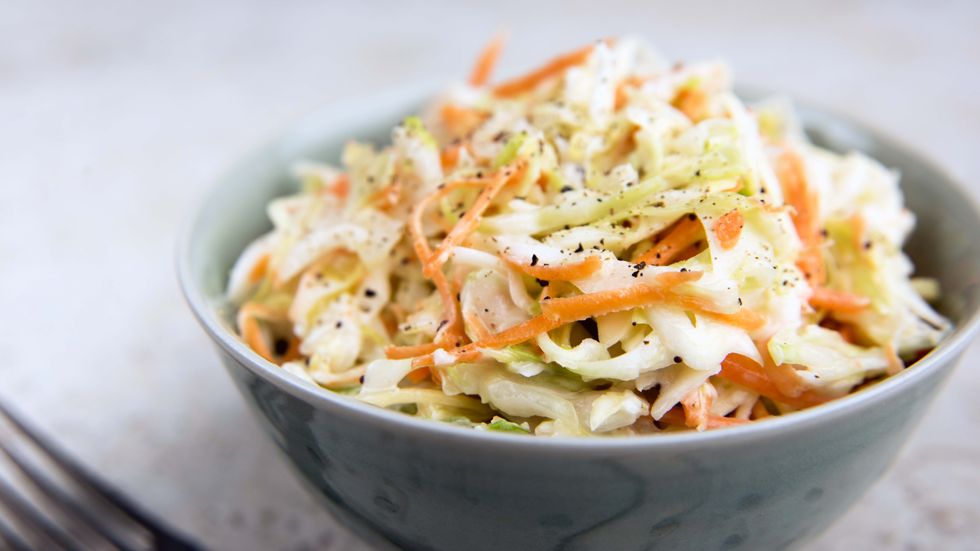 Freshly made coleslaw in a bowl.

I recently had an excellent cheeseburger in Toms River, NJ. The patty was cooked just as I like it, medium rare, with a warm pink center gushing with greasy goodness. It came out with thick bacon seasoned with oregano and pepper, and the extra sharp cheddar tenderly oozed into the cracks of the fragrant beef.

The bun was toasted perfectly, with grill lines marking its crunchy surface over a warm, soft inside. The produce was fresh, the pickles were crunchy. A small potato had been hand cut and seasoned with garlic and cumin, and the beer was ice-cold.

I was seated with close friends, the jukebox was on point all night, and our server couldn’t have been sweeter.

On the plate next to that delicious hamburger and those tender fries was what I can only describe as the liquid from a can of corn mixed with what remained after a stray dog tore into an old head of cabbage. It had seemingly been shaken in a paint mixer — in an old paint can — and squirted into a ceramic dish, then been left to sit out in the sun for an afternoon before finally being dashed across my plate with a few shredded bits of carrot.

It was their coleslaw. I will never, ever go back.

A good sandwich, hamburger, pizza, or any other meal ready to eat with one’s hands is about so much more than the food itself. A Coney Island hot dog is about the hot dog, but it’s also about taking the first bite, feeling the juice explode in your mouth and mix with the lingering taste of salt water, and washing it down with a frosty light beer. A slice of pizza needs to be the right balance of cheesy and toasty, but eating it at 2AM on the Lower East Side with a sore throat after five hours of screaming around the diviest haunts south of Houston completes the experience.

And there is nothing that can ruin an excellent cheeseburger experience faster than a ramekin of goopy cabbage water.

Van Halen are infamous for their unusual backstage rider demands (a herring in sour cream, a room for martial arts, and a large bottle of lube among them), but they’ll go down in history for one of their tamer requests: “large bowl of M&Ms (absolutely no brown ones).” While many assume band shenanigans or OCD is to blame for the candy demand, it’s actually a far more sensible request. If the band noticed brown M&Ms upon arriving at a venue, they would know that the crew did not pay close enough attention to the detail of their demands and would insist that every single connection be double checked before they ever took the stage.

This gut check written into their rider was an easy way to know what kind of crew they were dealing with. Were they people who wanted to put on a good show, or simply look like they were putting on a good show?

There seems to be an assumption made by some restaurants that any hamburger or club sandwich must have coleslaw alongside it, regardless of quality, to be included as a visual garnish as opposed to an edible side dish. It’s the only way I can make sense of the gallons of terrible coleslaw I’ve been served over my life. Who started this? What culinary nihilist is to blame for the acres of good cabbage wasted in the name of a pointless aesthetic day after day?

It’s because of this that I’ve long held that I won’t return to any restaurant that serves me bad coleslaw — if they value presentation over the quality of food, then we will never to see eye to eye on what makes a good meal. While I concede that there are certainly some restaurants that may genuinely attempt to make good coleslaw and fail at the task, I have found that those cases are usually obvious. There is a difference between poor coleslaw made in good faith and whitish-gray slop squeezed into plastic container at the beginning of the day and kept in the fridge until needed.

Some may ask why I’m not getting this worked up over bad french fries or other sides, and it’s a fair point to raise; I’ve had countless orders of bad fries over the years. Droopy, saggy, overly-greasy or just plain cold fries are the scourge of plates nationwide. But even the most pitiful of potatoes still seem to be made in earnest — I’ve never had the tuberous equivalent of bad coleslaw.

When coleslaw is served as an afterthought, a tossed-off garnish included solely to check off a box, it says that the server cares more about creating the appearance of a proper meal than they do about creating an actual meal — and it has seeped into more aspects of modern food culture than just coleslaw. How many ‘New American’ restaurants have served you the same thick-cut, applewood-smoked bacon? The same ceramic bowl of mac and cheese with panko bread crumbs? The same seasoned truffle fries you’ve eaten at dozens of ~foodie~ restaurants before?

What’s more, if they threw together a visually passing coleslaw with the full expectation that no one would eat it, how am I to trust their meat? Their water? Their adherence to the health code?

Are they here to serve a good meal, or look like they’re serving a good meal?

To say that restaurants occasionally take short cuts is to say that the sun rises in the east and sets in the west. I’m not here to shame the food and beverage industry for trying to squeeze 10 omelettes out of 9 omelettes’ worth of eggs. What I am here to do, though, is to beg to the chefs, grill cooks, food truck operators, and restaurant owners of the world to please stop serving us coleslaw if it's not made with care and attention. We don’t need it, and more importantly, your (mostly delicious) hamburgers simply do not need the extra visual accompaniment. If you're going to serve it, give a damn.

More importantly, I’m also here to beg the inverse — readers and eaters, for the love of God, support anywhere you eat that serves excellent coleslaw. If the next lunch you sit down to serves you good coleslaw, know you are eating somewhere run by people who give a damn. Reward them with repeat business and recommendations*, go back for brunch, bring work friends to their happy hour. Vote with your dollars and let them know you recognize their attempt to rise above the common, goopy masses.

Good coleslaw. It’s the most important thing on the plate.

*The most recent places I’ve eaten with great coleslaw (and are thus run by people who give a damn): The Clam Bar on Montauk Highway in Amagansett, NY; Pair Wine & Cheese in Downtown Brooklyn; Buoy One in Riverhead, NY; Butcher Bar in Astoria, Queens