The IAU has just approved a dozen new names for features on Pluto’s moon Charon. They draw from an array of famous authors, characters, mythical objects and one U.S. filmmaker. 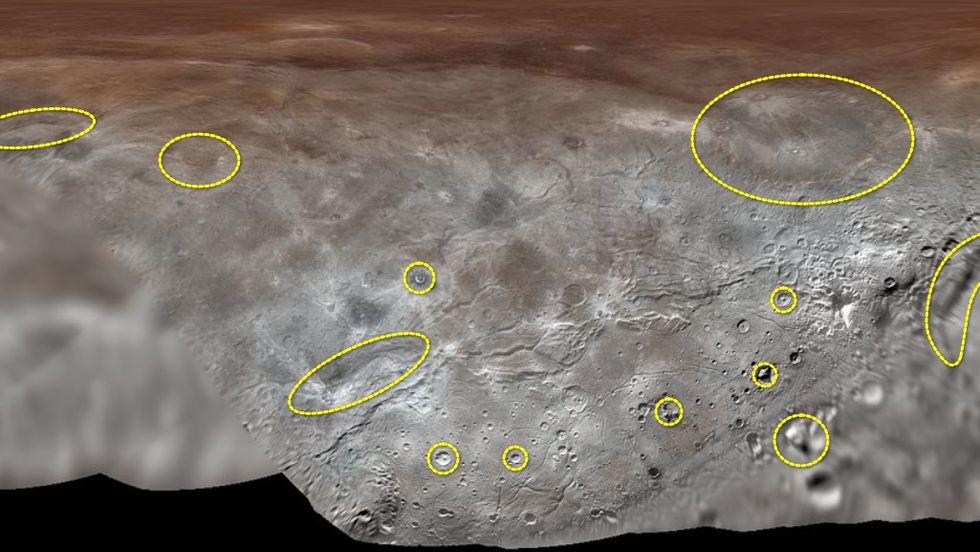 There's only one organization with the “official" ability to name off-Earth objects and places: The International Astronomical Union (IAU). We put “official" in quotes because these are just the names humans give them—to our knowledge, there is no intergalactically sanctioned authority. The IAU adorns most of what's out there—a lot of stuff—mostly with numeric monikers based on a system that uses prefixes to provide various bits of information about the object in addition to giving it a name. What's popularly known as the Andromeda Galaxy, for example, has two “official" names: M31 and NGC 224. The "M" stands for Messier, signifying that it's included in the catalog begun by Charles Messier in the late 18th/early 19th century. "NGC" is for its name in the New General Catalog. This month, the IAU approved a set of thought-provoking place names on Pluto's moon Charon proposed by NASA's New Horizons team.

But before we get to Pluto's moon, let's spend a little time “on" ours. (That's it. We're all out of quotation marks now.)

The names for major lunar features come from Giovanni Battista Riccioli, an astronomer in the 1600s. He named observable features—no dark side could yet be seen—using a few themes, including weather (Sea of Rains), states of mind (Sea of Tranquility), historical names, and, to appease the Catholic Church, some saints were thrown in for good measure.

The original names have been tweaked with designations from modern scientists and space programs, and the dark side of the moon has also been mapped. Some of the new names are IAU-official, and some of the more fun ones are informally used by various nations' space programs as quick shorthand. Who among us wouldn't wish to observe Earthrise standing within NASA's crater Shorty.

Here's a list of the new IAU-sanctioned names on Charon. It's quite a group.

Remember the quest for the Golden Fleece in Greek mythology? When Jason and his crew, the aptly named “Argonauts," departed Iolcos en route for Colchis, the ship they sailed on was the Argo.

The first science fiction author to win a MacArthur fellowship was Octavia E. Butler in 1995. She wrote a number of cherished books including her Patternist series and Xenogenesis trilogy.

Spooky. The Caleuche is the ghost ship of Chilean mythology reported to sail around the small island of Chiloé in the dark of night. A vessel out of north Chilote mythology, it has several versions and is often considered to be conscious and sentient. Whatever it is, it collects the souls of the dead as its crew on an endless voyage.

Arthur C. Clarke barely needs an introduction as the author of many well-regarded works of science fiction, including 2001: A Space Odyssey. His metier was space exploration, so he's a natural for Charon.

She is definitely not in Kansas anymore. Dorothy Crater is named for the heroine of L. Frank Baum's beloved Wizard of Oz book series.

It's a hotly debated film still today—brilliant or boring?—but 2001: A Space Odyssey is nonetheless an inarguable landmark in science-fiction moviemaking and so its genius director, Stanley Kubrick, gets a mountain on Charon. It's not Kubrick's only great film; see Dr. Strangelove.

Another mythical boat is honored on Charon. The Mandjet was the vessel that carried the god Ra —AKA the sun—across the sky each day. At night, the Mesektet reset Ra's location for the next day's journey. Together they were his Atet, sort of the first spaceship.

Nasreddin was a Turkish wise man and philosopher who died in 1275-1285 BCE. He eventually became a fictionalized character in countless humorous stories and parables told across the centuries throughout the Middle East, parts of Asia, and southern Europe.

In Jules' Verne's Twenty Thousand Leagues Under the Sea and The Mysterious Island, there was the submarine Nautilus, helmed by the redoubtable Captain Nemo—AKA Prince Dakkar—who's now immortalized in crater form on Charon.

Stanislaw Lem is a highly regarded sci-fi writer and Pilot Pirx is a character from his Tales of Pirx the Pilot. Pirx is a spaceman, and a space detective, traveling between Earth, Earth's moon, and Mars, though not, it should be noted, out to Pluto.

One of the less well-known characters in the Hindu epic Mahabharata, Revati was a beautiful princess who's generally considered the first fictional character to deal with time travel, way back in 400 BCE.

From Russian folklore comes Sadko, a merchant, adventurer, and musician from Novgorod who involuntarily explored the ocean bottom after being forced overboard by his ship's crew. This is part of Bylina, a sung narrative passed down through generations of Eastern Slavs.

One more name to note: Charon's. The moon was discovered by James Christy in 1978 when the astronomer grew suspicious about Pluto's odd, elongated shape. Or was it really two objects? Well, yes. The moon is just 12,200 miles from Pluto and about half its size. According to NASA, Christy named it for the “mythological ferryman who carried souls across the river Acheron, one of the five mythical rivers that surrounded Pluto's underworld." Also, the first three letters are the same as the first three letters of Christy's wife's. Her name is “Charlene."