Why We're So Easily Manipulated by Political Appeals to Fear 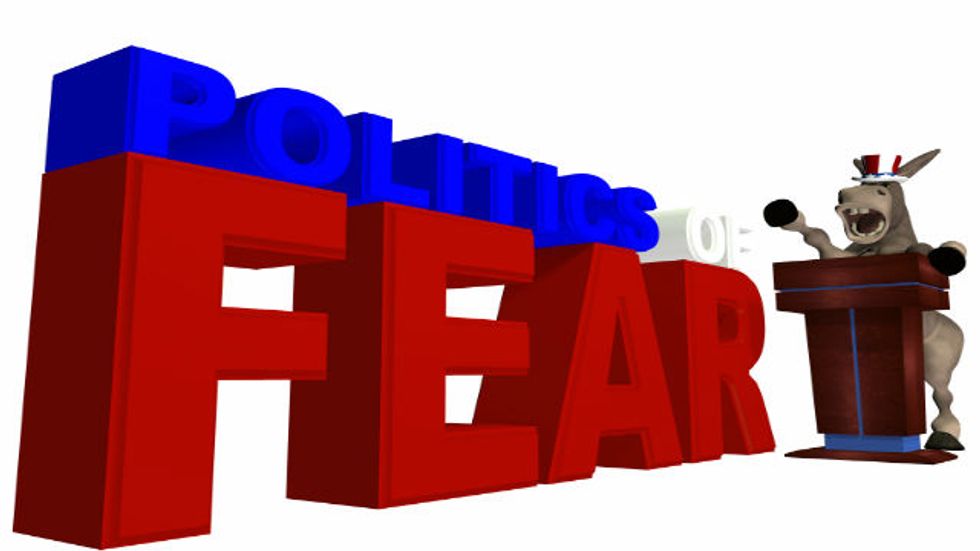 Be afraid. Be VERY afraid! Of Ebola. Of ISIS. Of immigrants threatening to bring both threats across a porous border that can’t be protected by a President who can’t even protect his own house. Be afraid! Vote Republican.

As the midterm elections near, the latest version of “they can’t keep you safe, so vote for me” is showing up in campaign ads and conservative commentaries. It’s just the latest in a long tradition of political fear mongering that has proven effective in swaying voters. In 1964 Lyndon Johnson’s 1964 Daisy ad promoted the fear that Barry Goldwater would lead the country to nuclear holocaust; Jimmy Carter’s ads in 1980 featured people-on-the-street saying “Reagan scares me.” George Bush’s 1988 ad suggested that a president Michael Dukakis would give all the Willie Hortons in prison weekend passes to go rape and pillage.

It’s easy to see how excessive and manipulative these claims are, so easy you’d think people would not be so readily taken in. But research on human cognition and the psychology of risk perception offers several explanations for why these campaigns work.

The first is that Ambrose Bierce was right when he wrote in the Devil’s Dictionary (paraphrasing) “the brain is only the organ with which we think we think.” As research in human cognition has established, most of what the brain does that turns into our judgments and behaviors happens subconsciously and is based as much as or more on emotion and instinct than on cold hard logic. And Job One for all those instincts is survival. The brain’s chief purpose, from the moment you get out of bed in the morning, is to get you safely to bed at night, not to get good grades or win Nobel prizes.

So we are constantly on the lookout for signs of danger. And cognition research has found that we are quick to judge those signs. We don’t take the time to get all the facts and think things through. We use a number of mental shortcuts to rapidly turn a few initial hints into snap judgments about whether something feels risky. One of those shortcuts is called “the availability heuristic.” The more available something is to our consciousness - the more aware of it we are - the more emotional weight it is likely to carry. Bogeymen in the news feel like bigger bogeymen.

Risk perception research by Paul Slovic and others has found that another psychological factor has a far more profound effect than availability on how worried we are, and this one has been spreading worry deep and wide in America for years. In a word, the issue is control. Do we feel like we can do what we need to do to keep ourselves safe? Tens of millions of Americans don’t.

But it’s not a matter of being able to keep ourselves safe from Ebola or ISIS. The real threat eating at a majority of Americans is from falling behind financially and losing the economic capacity to control our lives and protect ourselves. A Pew Survey last month found that three Americans in four say economic conditions are either only fair or poor. One in five thinks things are getting worse. Forty-five percent have been unable to pay doctor bills or rent or had trouble with credit agencies. Fifty-six percent of Americans feel they are falling behind financially. (Views of Job Market Tick Up, No Rise in Economic Optimism)

That feeling of economic pessimism, of falling behind, of not being able to pay the bills or buy groceries or fix the car or afford insurance or send your kids to college or even just enjoy an occasional night out for dinner at Denny’s…that’s the feeling of losing control…over your welfare, your safety, your future.

And one of the responses to that threatening sense of powerlessness is to turn to your tribe. Humans are social animals. We instinctively depend on each other for safety and protection. The more threatened we feel as individuals, the more we look to our tribe to provide a sense of power and control that we have in a group but lack as individuals. And one of the ways we turn to our tribe for protection is by adopting and espousing the tribe’s beliefs, so the others in the tribe consider us as members in good standing.

And this circles us back to the gullibility we have for partisan appeals to fear. Conservative Republicans who want to be considered members in good standing and not rejected as RINOs – Republicans in Name Only – are more likely to buy the current fear sales pitch that Democrats can’t keep them safe; from Ebola, or ISIS, or immigrants, or anything. Democrats in the 60’s and 80’s were ready to believe that Barry Goldwater and Ronald Reagan were ready to start nuclear war. This phenomenon is absolutely bipartisan. Buying into the fear beliefs of the tribe is a way to feel safe.

So the partisan nature of the current Republican fear appeal magnifies its effectiveness, by tapping into not only our innate sensitivity to anything that might be a threat and our greater sensitivity to threats making news, but to our instinct to circle the tribal wagons to protect ourselves when we feel like we can’t protect ourselves as individuals.

Fear is good. It helps keeps us alive. And most of the time we get things right. But oh how the instinctive nature of our risk perception system makes us gullible, manipulable, simple-minded fish chasing the shiny false lure of safety. We might make smarter choices if we are wary of that lure when we step into the voting booth.