The double-edged metaphor of Frankenstein. Fear GMOs, but Fear decisions driven by The Angry Mob more. 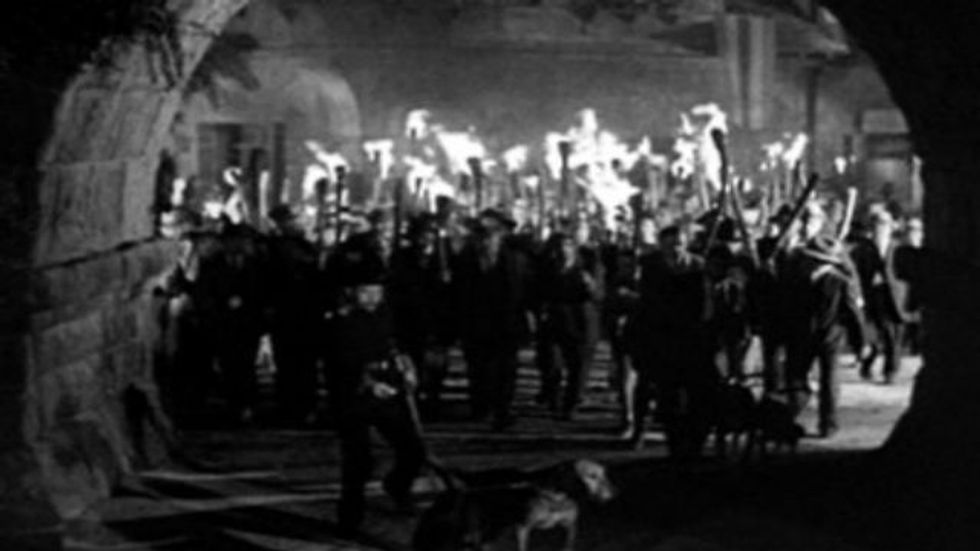 The Frankenstein metaphor that opponents of genetically modified food use to promote their fears is more apt than they realize. Yes, the monster is an unnatural life form created by scientific hubris that wreaks death and destruction, the way they describe biotechnology. But remember that frightened angry mob in the Frankenstein movie, the terrified townspeople that take up torches and pitchforks and follow their baying hunting dogs to kill what they fear? It’s a more-than-apt metaphor for how the most virulent segments of the anti-GM mob are behaving. And for society as a whole, between the perceived risk of GMOs and the real risks of making policy about safety under the torches of an emotion-driven mob that distorts and ignores the evidence, the latter is the FAR scarier of the two.

Let’s acknowledge right away, with respect, that the emotions we ALL have toward various risks are an innate part of the way human cognition sees the world. None of our perceptions, about risk or anything, are simply an objective matter of the facts alone. We interpret the facts through powerful and subconscious instinctive and emotional lenses. We ALL fear human-made risks more than natural ones. We ALL fear risks that are imposed on us more than risks we take voluntarily (choice is why we want labeling, so we can know what’s in our food). We ALL fear risks more if we suffer all the harm while somebody else, who is exposing us to the risk and who we mistrust, reaps all the rewards. (Monsanto, et. al.) And, like Frankenstein, we ALL fear the unknown and what we don’t understand, more than the familiar.

The research of psychologist Paul Slovic and others have established that these ‘fear factors’ are a built-in component of the risk perception systems that has successfully gotten us this far through evolution’s challenges. They are an innate part of how, quite rationally, we use every tool at our disposal, including our ancient instincts, to stay safe…to survive. The problem is, these emotional filters sometimes lead to perceptions that cause us to light the torches and scream in fear “Kill The Monster”, even when there is no real monster there. And once those passions are in place, no amount of evidence or reason can talk us down. Instead, we cherry pick and distort the evidence, or ignore it altogether, to support the views we already have, perceptions we’ve established that help us feel safe. It literally feels dangerous to change your mind about a risk once it’s made up.

That, in a nutshell, is what’s starting to happen in the United States regarding genetically modified food (and how things have already played out in Europe). Amy Harmon’s excellent report in the New York Times, A Lonely Quest for Facts on Genetically Modified Crops, captures this brilliantly; a County Councilor on the island of Hawaii considering a proposal to ban GMOs studied up on things, found that almost all the arguments against GMOs didn’t stand up to even the most basic open-minded scrutiny, but watched in dismay and frustration as a mob of frightened opponents dominated government hearings, overwhelming the political process and, invoking passionate fears of a risk specifically because it’s unnatural, uncertain, imposed, by mistrusted companies that unfairly reap the reward while we suffer the risks, rammed the ban through. The only thing missing were the torches and pitchforks.

This is SCARY….REALLY scary, for all of us, because GMOs aren’t the only risk issue where emotion driven mob rule has overwhelmed the evidence. Portland, Oregon just rejected fluoridating their public drinking water supply, despite overwhelming evidence that the tiny risks (mostly fluorosis, white spots on kids’ teeth) are vastly outweighed by the public health benefits. A majority of frightened Americans blindly accepted increased government surveillance – you know, all that NSA data mining that we’re now so upset about - when in our fear we bought the Bush/Cheney administration lies that Saddam Hussein and Al Qaeda were teaming up to threaten us with Weapons of Mass Destruction. (I wonder how Edward Snowden felt back then.)

What’s at issue here is far more than genetic modification of crops. This is really about how society makes decisions about risk in general, and how in a democracy we should balance our emotions and values against the evidence. And at a time when risk issues have become more complex and demand more careful thoughtful analysis, not less, and in a global world where risks have immense and long term consequences, what’s at stake is nothing less than our safety and survival, if we let what feels right get in the way of what the evidence says will do us the most good.

There is a telling moment in the Mary Shelley novel Frankenstein (read it here free http://www.literature.org/authors/shelley-mary/frankenstein/) that perfectly captures the warning the Hawaiian lesson offers us about how society deals with risk. The hideous creature created by Dr. Frankenstein has hidden outside a cottage for months, learning by watching and listening to the family inside how to speak, and think. He admires them. He cares for them. Lonely, he longs to meet them, but he understands that how he looks will scare them. One night, when only the blind father is home, the creature goes in. The blind man, open-minded, welcomes him and says “the hearts of men … are full of brotherly love.” He offers the creature food. They have a warm intelligent conversation. The creature is gentle, caring, respectful.

But when the rest of the family comes home and sees the hideous beast with their father, the sight fills them with fear, and without regard for the creature’s true nature they attack him and drive him away, turning him into the murderer he becomes. How’s that as a metaphor for how the emotional nature of risk perception can blind us to evidence and lead to decisions which, while made in the name of safety, can actually make things much much worse.

In 2012, French sociologist Bruno Latour wrote a fascinating essay on the Frankenstein metaphor, Love Your Monsters , arguing that our modern sins are not technologies like GMOs or nuclear power themselves, but our failure to handle them responsibly. He likes this to Dr. Frankenstein’s creature, whose sins arose not from his unnatural creation, but because at the moment of the creature’s creation, revolted by what he had made,  Dr. Frankenstein abandoned him. Love Your Monsters is an entertaining and thought provoking piece.