A Miracle on the Fourth 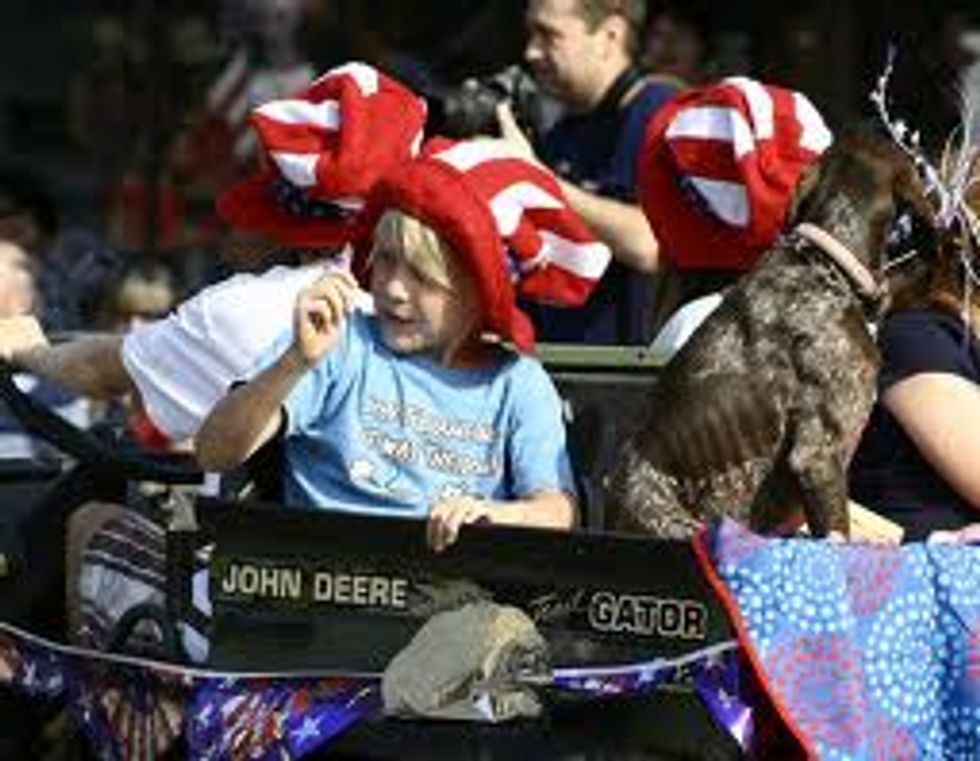 Well, don't get excited.  I know it really wasn't a miracle.  But the strangely persistent summer rain that took out all the other July 4th activities in this part of the world stopped long enough for Cave Springs, GA to have its parade.  The parade was slightly diminished this year by the weather, but only slightly.  The parade has never been canceled or even postponed for any reason.

The image above isn't of this year's parade.  For the first time I can remember, it was too cloudy to take great pictures.  The upside was the temperature was comfortably cool.

Here are some of the parade's components:

1. All kinds of motorized vehicles.  The South is nothing if not highly mechanized.

2. The promiscuous display of the American flag everywhere, including as clothing.

3. Lot of people mounted on their own horses, and at least a couple of wagon trains.

4. The occasional person dressed up as the Statue of Liberty or Uncle Sam or patriotic Elvis.

5. The occasional striking banner, including one that said "Minutemen for Christ."  The fine print explained that Minutemen display a combination of Christian and old-fashioned Southern virtue—honor, courage, and so forth—in their lives. That can't be bad.

6. The parade is a bit ironic about itself, but not too much.  People really are proud to be Americans and are grateful to those who have secured their freedom.  So they know that the Lee Greenwood country song (recently covered so beautifully by Beyoncé) is a little corny, but they also know that every word rings true.  The parade is a patriotic community event, and not a way to trap tourists or amuse bored yuppies.

7. The parade has evolved into a distinctive feature of the place Cave Springs, which is a small town with a long and unusual history.  There really is a spring that flows from a cave. You can drink from one and explore the other in a very pretty little park.  And Cave Springs has long had one of the best schools for the deaf in the country.  Compared to some other towns around here that have experienced decline, Cave Springs hasn't changed that much—and what change there has been has sometimes been for the better.

8. The people of Cave Springs are quite diverse.  But they're generally pretty sophisticated and highly educated.  One of the big treats of the parade is seeing two of the sons of the parade organizer—young, brilliant, and already highly successful physicians—marching up front carrying a flag and wearing flag shirts.

9. There are also lots of kids, riding, marching, watching, and greedily picking up the candy thrown from the vehicles.

10. Last but hardly least:  There are a variety of pets riding, marching, and watching.

11. After the parade, it's customary to go to the grounds of the Methodist church for homemade ice cream.