How we think about the Earth and how it actually is aren’t necessarily the same. In a way, we’re victims of our own education. For instance, while any globe or on any map it’s round and spherical, scientists tell us the shape of the Earth is actually and oblate spheroid—a sphere that’s bulging out at the center (equator) and squished down at the poles. Sir Isaac Newton was the first discovered this. And our planet isn’t exactly straight up and down, either. It’s tilted by approximately 23.44°, which accounts for seasonal changes.

When the Earth is leaning toward the sun, its summer in the northern hemisphere and winter in the southern one. While when tilted away, the situation is reversed. The summer solstice is when the northern hemisphere is at its most extreme angle toward the sun, while with the winter solstice, it’s at its farthest away. What’s left are the spring (vernal) and fall (autumnal) equinoxes.

At these two times a year, always around March 21 or September 21, the amount of sunlight and darkness in a day is about equal, no matter your latitude. That’s because the tilt is neither toward nor away from the sun. Rather, the equator gets the lion’s share of its rays. This year, the vernal equinox occurs on March 20. While its arrival heralds spring north of the equator, it starts off fall south of it.

Here are 10 need-to-know facts about equinoxes: 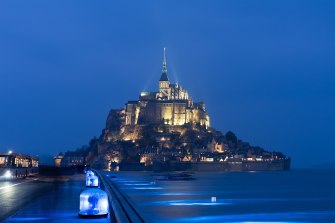 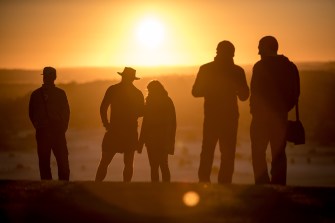 The sun rising at the spring equinox at the equator. Credit: Getty Images.

2. If you went to the equator on either of these days, you’d see the sun straight overhead at noon. This isn’t its actual position, however. It’s below that point. This optical illusion is due to the refraction or bending of the sun’s rays as they travel through the atmosphere. 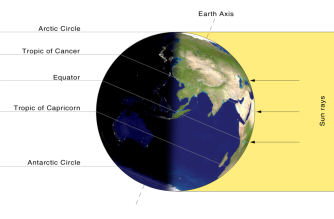 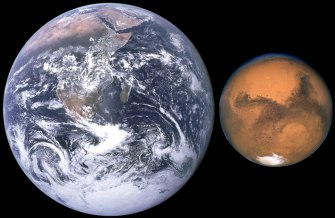 Comparison between the size of Mars and the Earth. Credit: NASA.

4.  How did the Earth get tilted in the first place? It’s thought that an object the size of Mars crashed into it some 4.5 billion years ago, while our planet was still young. 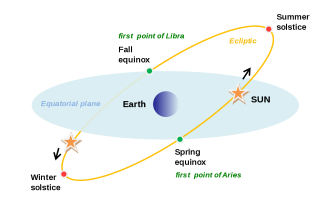 5. The Earth’s axial tilt, also called its obliquity, isn’t a static number. The Earth wobbles on its axis, as the result of earthquakes, but also different gravitational forces acted upon it by the moon, the sun, and the other planets in our solar system. Therefore, Earth’s obliquity varies at times between 22.1° and 24.5°. 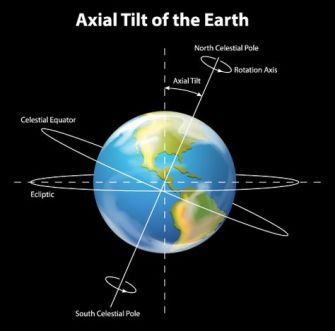 6. Other names for Earth’s wobble include the precession of the equinoxes and the axial precession. 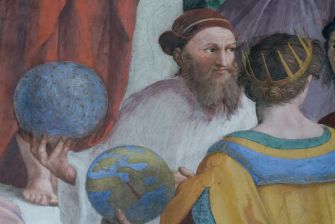 Hipparchus of Nicea (left) and Ptolemy. The School of Athens by: Rafael, 1509. Credit: Wikipedia Commons.

7.  In 130 BCE, Hipparchus of Nicea discovered the Earth’s axis shifted slowly over time. He came across this by comparing astronomical observations separated by 100 years. 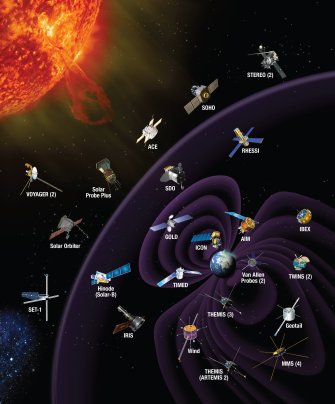 The Heliophysics System Observatory (HSO). Even though it has many parts, it’s considered one observatory. Credit: NASA.

8. Although we’ve looked into this for a long time, we didn’t really get highly detailed data until we went into space. And we’re still learning. Consider NASA’s Heliophysics System Observatory (HSO), which started in 2013 and is wrapping up in 2022. The HSO includes 20 missions and 23 spacecraft. It’ll investigate “space weather,” how our star interacts with the Earth and other planets as well. 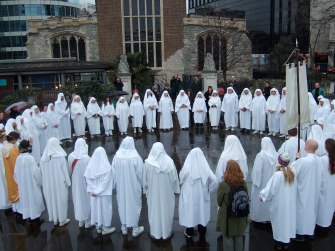 A modern-day druid ceremony near Stonehenge during the vernal equinox. Credit: Wikipedia Commons.

9. Cultures all over the world celebrate holidays and festivals on the equinoxes. One of the most notable is the Japanese celebration of Higan, which takes places on both equinoxes. During each Buddhist holiday, it’s said that the spirits of the dead pass into Nirvana. It lasts for six days. During that time, the observant visit the graves of loved ones, clean and decorate them and reflect on and share memories of them. 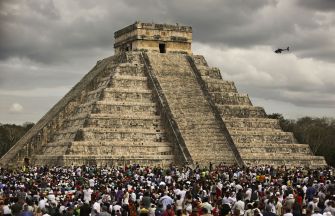 El Castillo pyramid in Chichen Itza, Mexico. Revelers come even today to see the “snake of sunlight” making its way down the steps. Credit: Getty Images.

10. In the ancient Mayan culture, a ritual including human sacrifice took place at the spring equinox. It happened at El Castillo, a pyramid located in Chichen Itza, Mexico. The pyramid has four staircases. The angle of each was carefully calculated so that the “snake of sunlight” would slither down the stairs at the dawning of each equinox, as the sun rose into the sky.

Related
The Present
How heat pumps of the 1800s are becoming the technology of the future
Innovative thinking has done away with problems that long dogged the electric devices — and both scientists and environmentalists are excited about the possibilities.
Starts With A Bang
JWST’s hunt for most distant galaxies gets double boost
Along with gravitational lensing and ALMA’s incredible long-wavelength spectroscopy, JWST is reshaping our view of the early Universe.
Thinking
Finding your essential self: the ancient philosophy of Zhuangzi explained
Adopting a healthy scepticism towards inherited ideas means “emptying the container of the Self.”
The Future
Startup’s bladeless flying car is designed to reach Mach 0.8
One of Jetoptera’s VTOLs is expected to reach speeds of around 614 mph, about as fast as a commercial jet airliner.
Health
New blood types are often discovered following medical disasters
New blood types are regularly discovered by an unusual absence or an unusual presence — both of which can result in tragedy.
Up Next
Politics & Current Affairs
50 million Facebook users’ private information compromised by Cambridge Analytica, Trump’s digital wing
An innocuous sounding company, Strategic Communications Laboratories, was banned by Facebook. But the data the company mined was used by Trump’s campaign to whip the electorate into political animosity.