Senator John Sidney McCain III, who died Saturday, Aug. 25, 2018 at the age of 81, is lying in state in the Rotunda of the United States Capitol.

“Though the highest office eluded him, he attained what is far more enduring: the abiding affection of his fellow citizens, and an example down the generations,” said the House speaker, Paul Ryan, in a speech.

Vice President Mike Pence also spoke at the ceremony, which some described as awkward given his allegiance to President Donald Trump, with whom McCain had very public disagreements. Also not invited to the ceremonies was McCain’s former presidential running mate Sarah Palin.

In what amounts to getting the last word in their high-profile feud, McCain openly requested that Trump not attend any of his funeral or memorial services, but did ask former presidents George W. Bush and Barack Obama to deliver speeches at his funeral, which is scheduled on Saturday.

“I think it’s fair to say that they have a very different view of this country and what this country means, here and abroad,” Mark Salter, a long-time friend of McCain, told The Independent. “His overall message was: ‘It doesn’t have to be this shitty.’” 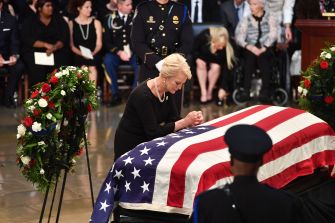 Cindy McCain, wife of John McCain, prays at the casket of her husband as he lies in state at the US Capitol Rotunda in Washington, DC, on August 31, 2018. (Photo by Nicholas Kamm / AFP) (Photo credit should read NICHOLAS KAMM/AFP/Getty Images)

Lying in state is a tradition in which the body of a deceased government official is placed inside the Capitol or a government building where family, colleagues and, after a ceremony, the public can pay respects. McCain is the 31st person to receive the rare honor.

The first was three-time presidential candidate Henry Clay, who was known as “The Great Compromiser” for his willingness to work with political opponents, a quality for which McCain is also being celebrated.

Others who have laid in state include presidents such as Abraham Lincoln, Dwight Eisenhower and John F. Kennedy, and also other officials like FBI Director J. Edgar Hoover and The Unknown Soldier for the Vietnam War.

In order to receive the honor, Congress must propose and approve a resolution, or simply have leadership agree to it. Permission from the survivors’ of the deceased official is also required.

Lying in state is different from being lain in honor, which is reserved distinguished American civilians, or being lain in repose, an honor given to Supreme Court justices that takes place in the Great Hall of the United States Supreme Court Building.

Here’s a full list of Americans who have lain in state:

Related
The Learning Curve
Why do high IQ people stagnate in their careers? Emotional intelligence
Research suggests that emotional intelligence is more vital for success than IQ.
The Present
Even in the age of AI, some problems are just too difficult for computers
Computers are growing more powerful and more capable, but everything has limits
The Future
How the metaverse will revolutionize K-12 and higher education
Imagine going on a tour through the human circulatory system as a tiny cell. That is just one example of education in the metaverse.
Starts With A Bang
Ask Ethan: What are white holes, and do they really exist?
In General Relativity, white holes are just as mathematically plausible as black holes. Black holes are real; what about white holes?
Life
Strange life forms create an “alien” ecosystem in an abandoned uranium mine
Slimy biofilms made up of bacterial and eukaryotic life forms have taken over an abandoned, flooded uranium mine in Germany.
Up Next
Politics & Current Affairs
Chicago 50 years later: a city looks back and disagrees on what happened
50 years ago the city of Chicago erupted in a legendary police riot.