The time has come for Space Force, Vice President Pence told an audience at the Pentagon on Thursday.

Pence outlined the administration’s plans to establish the U.S. Department of the Space Force by 2020, and to create three new organizations within the Defense Department that would manage military operations in space.

“The time has come to write the next great chapter in the history of our armed forces, to prepare for the next battlefield where America’s best and bravest will be called to deter and defeat a new generation of threats to our people, to our nation,” Mr. Pence told an audience at the Pentagon.

These new organizations are part of a broad move to restructure the way the U.S. military manages its space operations and technologies. The military relies on space technology for various operations, including GPS, satellite imagery and probes that can detect missile launches. But these operations are spread across the Air Force, the National Reconnaissance Office, and the Army. The administration hopes to consolidate these efforts by creating military entities solely dedicated to space operations, including Space Force, the establishment of which would require Congress to pass new legislation.

But that’s not important right now. The first order of business, according to the Trump Make America Great Again Committee, is to pick a cool Space Force logo. Here are the ones the committee has proposed so far:

It’s unclear whether the crowd favorite among these options could be used in an official capacity within Space Force or just on merchandise.

Those, by the way, aren’t the first logos designed for Space Force. After the president declared in June his bold plans to create a sixth branch of the military, Bloomberg Businessweek asked eight renowned graphic designers to come up with their own logos for Space Force. 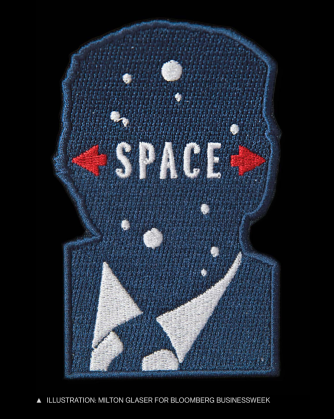 The results ranged from a straightforward logo with a little green alien front and center; a minimalistic black-on-white logo that represents a “black hole of sorts”; and a silhouette of Trump with the word ‘space’ where his brain would be.

The artifacts were often made from found objects – an Ivory dish-soap bottle transformed into an earthenware figure.
Up Next
Strange Maps

Just ten rivers are responsible for up to 95% of all river-borne plastic trash that ends up in the sea. Silver lining: cleaning them up would have a huge positive impact.