When New England Patriots owner Robert Kraft visited rapper Meek Mill in a Philadelphia prison Tuesday, it wasn’t a big surprise. The 76-year-old Kraft has hired hip-hop artists for team parties, and he’s been photographed with Beyoncé and husband Jay-Z. Kraft is just one of the well-known names who are raising their voices in protest of the treatment of Mill by the U.S. legal system, a case that represents the way the legal system treats many Americans of color.

Mill’s case began before fame when he was known as Robert Rihmeek Williams. In 2007, the then-19-year-old was arrested for drugs and carrying a concealed weapon he had no license for.

Since that time, the arresting officer’s integrity has come into question—his name has appeared on a list of officers suspected of framing witnesses and lying in court—and prosecutors for the Philadelphia District Attorney’s offices support the vacating of Mill’s original conviction because there are “questions about the credibility” of that officer. On April 16, Philadelphia District Attorney Larry Krasner announced he does, too.

Mill was convicted and served his sentence, getting out in six months on parole. However, on top of the jail time, Judge Genece E. Brinkley had also sentenced him to seven years of probation that remained in effect.

The latest Federal data says that in 2015 there were 3.8 million people on legal probation in the U.S. and only about half of those had been released from it by 2016. Though black people make up only 13% of the U.S. population, they constitute 30% of those put on probation. They’re more likely to get probation than whites, and more likely to have probation revoked and land back in jail. 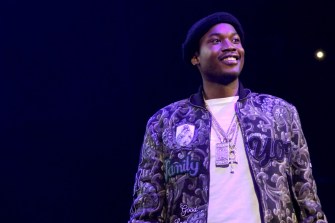 Meek had been paroled to house arrest and ordered by Judge Brinkley to get his GED and drug treatment. Over the next few years, a series of failed and skipped drug tests led Brinkley to begin imposing travel restrictions to the Philadelphia area on the rising rap star.

Since that time, it’s been a series of drug-test and travel violations on Meeks’ part, and some unusual behavior on Brinkley’s, including an attempt, according to Mill’s lawyers, to force the artist to leave his record label and sign with a friend of the judge. He also says Brinkley asked him to record a song containing a shout-out to her. There have also been off-the-record meetings at which no lawyers were allowed, and Mill claims the judge has warned him not to attempt to appeal her rulings, which he’s done anyway, to no avail.

In November, Brinkley sent Mill to jail for the current two-to-four year sentence. She noted new drug-test and travel violations, an assault charge that was later dropped, and a New York reckless driving citation for popping a wheelie on an NYC street. DJ Khaled’s single ‘Top Off‘ (with guests Beyoncé and Jay-Z) includes the line:

The face of a brutal system

Though the details are his own, Mill’s experience falls in line with the sort of never-ending probation in which people of color are so often trapped. 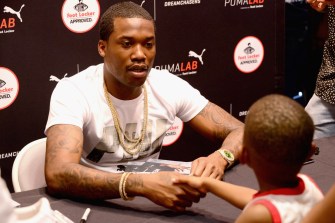 Pitchfork asked civil rights attorney Thomas O. Fitzpatrick what he thought of the case. “Is it fair to Meek Mill? Eh, he knew what it was. This isn’t a surprise to Meek Mill.” On the other hand, “Is it fair in terms of: Should we look at this as an indictment of our system? Absolutely, we should. And we should reconsider how we do things.” DA Krasner says that Mill’s case perfectly demonstrates what’s wrong with the justice system: “Across the board, African-Americans are ending up with worse sentences over and over than white people.”

Many agree. The hashtags #freemeekmill and #justice4meek are popular on Twitter, and Pennsylvania governor Tom Wolf recently tweeted his support for vacating Mill’s conviction: 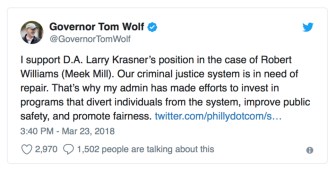 Colin Kaepernick, Rick Ross, Lil Uzi Vert, Julius Erving, and Rev. Al Sharpton are some of the other well-known names pulling for the rapper.

Whatever ends up happening with Mill, there’s an entire population of black prisoners trapped in a system that seems to never want to let them go. There’s bipartisan support for reform of sentencing but, apparently, the probation trap is not part of the discussion yet, however much a case like Mill’s makes it clear that it should be.

In November 2017, Jay-Z wrote an opinion piece published in The New York Timesabout how the probation model is less a second chance than a field of land mines:

“On the surface, this may look like the story of yet another criminal rapper who didn’t smarten up and is back where he started. But consider this: Meek was around 19 when he was convicted on charges relating to drug and gun possession, and he served an eight-month sentence. Now he’s 30, so he has been on probation for basically his entire adult life. For about a decade, he’s been stalked by a system that considers the slightest infraction a justification for locking him back inside.”

Related
Hard Science
Some earthquakes last for seconds, others for minutes — and a few for decades
What do you call it when the Earth shakes for three decades?
Sponsored
What childhood “money story” is shaping your financial behaviors?
Here are the signs that you inherited “money anxiety” from your parents.
The Present
The “maritime Indiana Jones” who salvages shipwrecks now wants to tow icebergs
Simple physics makes hauling vast ice chunks thousands of miles fiendishly difficult — but not impossible.
Neuropsych
Inside the brains of aging dogs
In a citizen science project, thousands of pet dogs are helping scientists to understand what happens to memory and cognition in old age.
Neuropsych
The most common source of awe might surprise you
It’s us.
Up Next
6 Employee Productivity Tips to Increase Workplace Efficiency
Optimal efficiency is a goal that every organization or business strives for. However, achieving that task is easier said than done. Helping employees find ways to increase their efficiency while […]