For years, the tobacco industry knew that their products were harmful to health. To protect their profits, they covered up what they knew, paid scientists to cast doubt on that evidence, and right through their CEOs’ public testimony in Congress, just plain lied. As a result of these deceits, tens of thousands of people died.

Ultimately this selfish dishonesty came to light, and the industry was held legally liable in a massive settlement with 46 states that cost them $206 billion, to pay for the harm they did. Now the New York attorney general is investigating Exxon Mobilalong basically similar lines, as evidence makes clear that the company knew about the potential harm of climate change, and either hid that knowledge or tried to sow public doubt and forestall government action against fossil fuels, the company’s lifeblood.

Some, including some members of Congress, are also calling on the U.S. attorney general to investigate Exxon Mobil for possible criminal violations of the Racketeer Influenced and Corrupt Organizations Act (RICO) as well as consumer protection, truth in advertising, public health, shareholder protection, or other securities laws.

Such Merchants of Doubt behavior by corporations is unquestionably selfish, immoral, and infuriating. But as much as this despicable and harmful dishonesty cries out for punishment, just how should it be sanctioned? Do we really want it to be illegal? That’s not as simple as it seems.

Is Exxon Mobil’s behavior any different than that of the organics industry, which continues to fund research and advocacy to cast doubt on the overwhelming scientific consensus that genetic modification of food causes no harm to human health? Is that not Merchants of Doubt behavior by a business interest to protect its profits? I recently posed that question to Naomi Oreskes, co-author of the book Merchants of Doubt. She acknowledged, hesitantly, that it might be.

What about the researchers and academics who publish papers, invoking the credibility of their expertise and the “peer-reviewed academic literature,” that dishonestly cherry pick and twist the evidence, and flat out lie, specifically to cast doubt on the consensus about the human safety of GMOs. Isn’t that precisely what they rightly accuse the tobacco and fossil fuel and chemical companies of doing? They may not be acting for profit, but these academics and scientists are unquestionably contorting the evidence to spread doubt. Here’s one recent example, by the widely (and rightly) respected Dr. Sheldon Krimsky; 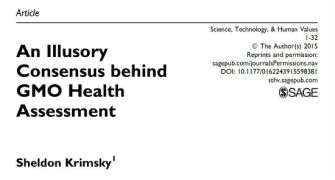 The consensus regarding human safety and agricultural biotechnology is no more illusory than is the consensus among scientists on climate change. There are skeptics and remaining questions to answer on both issues. But there is also overwhelming scientific consensus on both. And Dr. Krimsky knows it.

Or how about the overtly dishonest manipulation of the evidence about the human safety of GM foods by Greenpeace and other GM opponents, who investigations have shown are clearly and knowingly fudging the facts to advance their values-based agenda. See William Saletan’s investigation of this in Slate:

Let’s be clear. This advocacy does harm, real harm, far more proven tangible, harm than the evidence says GM technology itself does. Blanket opposition to agricultural biotechnology impedes adoption of many specific applications that could be dramatically improving human health and welfare — even saving lives (e.g., Golden Rice).

Advocates who knowingly distort the science and promote doubt and fear of vaccines do real harm. Advocates who deny the evidence about nuclear radiation — that it is FAR less dangerous than widely assumed (see Radiation and Fear: the Mismatch) — do real harm, impeding adoption of a carbon-free form of energy. Those who knowingly deny the evidence that nearly unchecked accessibility to guns facilitates more killing with guns… lord knows THEY do real harm.

So if we hold Exxon Mobil legally liable for such behavior, and the law is fairly applied, shouldn’t anyone who deceives and casts doubt on what they know the science says be held to the same legal standard? Aren’t they doing real harm with their deception, whether their motive is profit (the organics industry) or advancing a value-based agenda in a way that harms others? Tort law — liability for causing harm — doesn’t care about motive. If you lie and do harm, you are liable.

You can see the slippery slope here. As much as corporate Merchants of Doubt behavior infuriates, do we want to make all such behavior illegal? Where is the line between knowingly deceptive distortion of the evidence in a way that does tangible harm, and free speech? When does “GMOs are unsafe!” or “Vaccines are dangerous!” or “Climate change isn’t happening!” go from advocacy to falsely yelling, “Fire,” in a theater? Has Exxon Mobil crossed that line? Greenpeace? The organics industry? How about the countless for-profit “Natural is Good” websites that peddle all kinds of snake oil products, taking money out of people’s pockets by preying on fear of almost anything human-made? How about the coal industry and the Koch Brothers and conservative donors who also helped fund climate change denial/skepticism? Should Robert Kennedy Jr. or Bill Maher or Jenny McCarthy be held legally liable for doing harm with their distortions of the evidence about vaccines? How about academics and scientists who claim the mantle of expertise and objectivity while knowingly twisting the facts to serve their beliefs, across a wide range of issues?

See the danger? There is no line, just a slippery slope, with some more obviously sinister Merchants of Doubt at the top, and lots of less-than-obvious offenders doing essentially the same thing sliding down the slope all the way to the bottom. Where does advocacy turn into legally liable tort/harm? Somewhere, for sure. The answer probably revolves around how purposeful and knowing the deceit was, and how directly that deceit and contrived doubt caused real damage.

But in a society that enshrines free speech as a basic right, the answer of how and when to sanction such behavior, without going too far, is not as simple as it might first seem. Investigations into such behavior should tread carefully. And they should target anyone who engages in it, not just the big, bad companies we all love to hate.

Related
Starts With A Bang
The Universe’s most unbreakable symmetry
The combination of charge conjugation, parity, and time-reversal symmetry is known as CPT. And it must never be broken. Ever.
13.8
The weirdness of quantum mechanics forces scientists to confront philosophy
Though quantum mechanics is an incredibly successful theory, nobody knows what it means. Scientists now must confront its philosophical implications.
Neuropsych
Why is a Starbucks loyalty rewards program making customers so angry?
The rewards price to get a free cup of hot coffee at Starbucks is going up.
Empowering growth
7 essential management training topics for every team leader
From emotional intelligence to problem solving, these management training topics will set team leaders up for success.
Thinking
What if you could rewire your brain to conquer suffering? Buddhism says you can
For Buddhists, the “Four Noble Truths” offer a path to lasting happiness.
Up Next
Starts With A Bang
Mystery Of Mars’ Lost Atmosphere Solved At Last, Thanks To NASA’s MAVEN Mission
Mars used to be a warm, wet world, filled with oceans, rivers, and maybe even life. Here’s what happened.“Studying whether there’s life on Mars or studying how the universe began, […]