The problem lies at the summit of Kilauea, where a lava lake has been draining quickly at a rate of about 6.5 feet per hour, dropping 970 feet below the surface over the past week.

“This is a huge change. This is three football fields going down,” Charles Mandeville, volcano hazards coordinator for the U.S. Geological Survey, said.

Scientists fear that, as lava and superheated rocks meet the water table below ground, steam could accumulate and cause an explosion that hurls massive rocks into the sky. 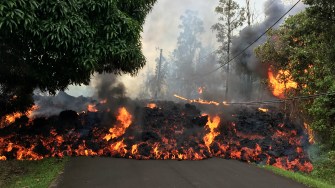 A lava flow moves on Makamae Street after the eruption of Hawaii’s Kilauea volcano. (Photo by U.S. Geological Survey via Getty Images)

Those 10-ton projectiles could fly a half-mile from the shield volcano if an explosion occurs, while clouds of ash could blanket areas up to 20 miles away.

The threat has caused officials to close Hawaiʻi Volcanoes National Park, and could soon ground planes at one of the island’s two major airports. Experts said an explosion wouldn’t be deadly as long as people steer clear of areas immediately near the volcano.

“We know the volcano is capable of doing this,” Mandeville said, referring in part to steam-driven explosions that occurred at Kilauea in 1924 after a lava lake drained at Halema’uma’u crater. “We know it is a distinct possibility.” 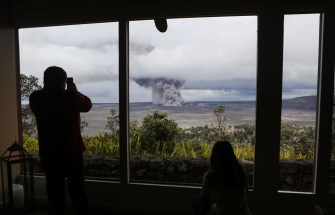 Other less-serious threats to residents in the area include volcanic smog– or “vog”–and acid rain. On Thursday night, Hawaii County officials sent a text message warning residents that changing wind patterns could bring more sulfur dioxide gas from the volcano into the air, which can cause respiratory problems and, in some cases, death.

“It’s just horrible. You can’t breathe in there,” Robynn Stagg, an evacuated resident who drove through the orange sulfur dioxide haze while trying to check on her home, told Reuters.

Increased levels of sulfur dioxide gas could give rise to acid rain, though experts say it won’t be dangerous.

“If you’re wearing clothing, there’s no risk,” University of Hawaii meteorologist and professor Steven Businger told the Honolulu Star-Advertiser. “It’s not going to burn your skin…It might irritate your eyes if you look up and get raindrops in your eyes.”

Scientists can’t be certain when the eruptions at Kilauea will stop.

“We can’t really peer through the ground and see it exactly in all its details and intricacies,” Bill Chadwick, a volcanologist at NOAA, told NPR. “It could last days, weeks, years. All that’s possible. It’s hard to say, unfortunately.

Related
Starts With A Bang
The sober truth about finding the Universe’s first stars
The Universe certainly formed stars, at one point, for the very first time. But we haven’t found them yet. Here’s what everyone should know.
Life
Our antidepressant drugs are affecting animals and ecosystems
A toxicologist explains the impacts of antidepressants on fish — and no, they’re not getting any happier.
The Past
Ancient migration: Bering Strait land bridge from Asia to North America was not a one-way road
Ancient humans crossed the Bering Strait land bridge from Asia into North America. But some of them went back.
Sponsored
Want to boost your happiness? Buy experiences, not material possessions
Some experiences continue to pay dividends time and time again.
High Culture
Did Paul Cézanne hide an early self-portrait underneath a 160-year-old still life?
To answer that question, we may have to figure out when the famed painter started to go bald.
Up Next
Technology & Innovation
SpaceX aborts Falcon 9 rocket launch at the last minute
The newest iteration of SpaceX’s flagship rocket hit a stumbling block during its first launch and has been delayed in order to work out unknown problems before another attempt.