Many concerned citizens and institutions around the world were disheartened when President Trump pulled out of the Paris Climate Agreement. According to leading global investment firm Morgan Stanley, it doesn’t matter much. The continuous drop in costs and the benefits surrounding green energy make it a rapidly more appealing option than its carbon-emitting cousins.

A top analyst at the firm says green energy will overtake fossil fuels by 2020. Don’t be fooled by Paris’s move to ban gas vehicles by 2040, or of Britain’s doing the same. These aren’t progressive policies but a recognition of an oncoming trend.

Stephen Byrd covers the North American power, utilities, and green energy sector for Morgan Stanley. He wrote in the report, “We expect the US to exceed the Paris commitment of a 26-28% reduction in its 2005-level carbon emissions by 2020.” Why is that? “Numerous key markets have reached an inflection point where renewables will have become the cheapest form of new power generation by 2020, a dynamic we see spreading to nearly every country we cover.” 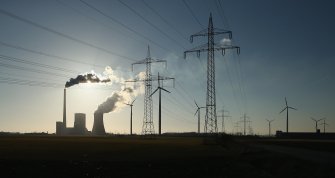 That’s because green energy has grown far more efficient. Manufacturing is taking place at greater volume at lower cost, and solar and wind have developed to the point where they can supply vast amounts of energy to the grid.

When it comes to solar, producers have introduced innovative manufacturing techniques, making the process more efficient and less expensive. Installation prices have dropped as well. The quality of the solar cells has improved, too. They’re more efficient than ever before.

In 2016, the price of solar panels dropped 30%. They’re expected to fall another 20% this year. It used to be that solar was a big investment upfront, with savings recouped at the back-end. Now, the development of large-scale solar plants is much more affordable and is set to become increasingly more so.

The report also states, “In central regions of the U.S., wind is now the least expensive type of power.” New developments have slashed costs to wind energy, including manufacturers making longer turbine blades and fashioning them out of stronger materials. Also, wind turbine towers today are set to loftier heights. This has allowed for higher energy production in a much more efficient manner. 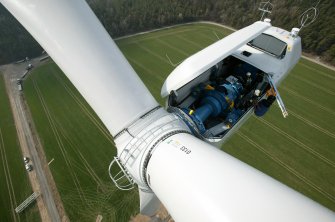 Better designs have made wind energy the cheapest form in some places. Getty Images.

Such innovations have caused wind energy costs to plummet. In many places in the center of the country, wind power runs around $30 per megawatt hour (MWh), while natural gas is about $40-$60/MWh. Consider Texas, an exceedingly red state. It leads the country in wind power, merely because so much of the land is windswept. It would be a waste from a business standpoint not to take advantage of it.

The other breakthrough is in storage. While peak energy use occurs in the early morning and evening hours, solar energy is best collected at midday, while wind energy is best gathered at night. Higher capacity batteries like Tesla’s Powerwall 2 is the answer. According to Bryd, the storage market alone is expected to grow from $300 million to as much as $4 billion within the next three years.

Through sheer market forces, the US will meet its carbon-reduction goals set by the Paris accord and perhaps even exceed them. Meanwhile, enterprises will be discouraged for not going green. Byrd writes, “Utilities with deregulated power plants, which must compete to sell power, generally will experience greater upside if they are leaders in renewable energy development, and additional downside if they own large fleets of fossil and nuclear power plants in competitive markets with cheap renewable energy.”

Some analysts believe that more green energy in the grid could lower consumer energy costs, causing a spike in consumer spending, which would boost the economy. Two-thirds of the US economy is consumer spending. Those companies that tenaciously stick to fossil fuels however, may in fact see decreased profitability over time.

To find out what Bill Gates thinks on the subject, click here:

Is what’s coming from under the ice going to kill us — or save us?

The bad news, the possibility of epidemics. The good news, it may help slow global warming.