Mitt, we just met you

(with apologies to Carly Rae Jepsen)

I have a lot to complain about, but let’s start with my three favorite moments from the final night of the Republican National Convention:

1. In an excellent biographical video that lent a human face to the humanoid Mitt Romney, we saw scenes of the Republican nominee playing delightedly with his five boys. Ann relates that “he would walk in the door after work and leave the briefcase at the door. That was it. He never looked at work again until he left in the morning.” One of the Romney boys told a pretty hilarious story about his dad’s frugality when it comes to lightbulbs.

2. Mitt Romney’s anecdote about his father greeting his mother every morning of their marriage with a rose — and his mom’s discovery of George’s death when one morning, her bedside table was bare — was heartfelt and heart-rending. It was enough to dampen the snarkiness of my Twitter feed for nearly half a minute.

3. Clint Eastwood, the night’s surprise guest in more ways than one, seemed to be reading for Grumpy Old Men II in desecrating the presidency and accidentally insulting Mitt Romney during his bizarre unscripted imaginary conversation with an absent President Obama. It was the Democrats’ dream lead-in to the 10:00 prime-time hour. 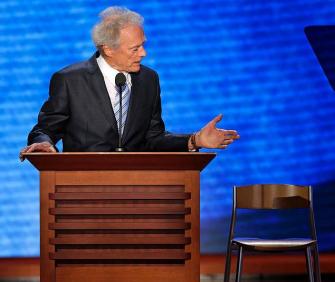 Aside from these moments of genuine pathos and schadenfreude, I was deeply bored and disappointed by the purported climax to the Republican National Convention.

Mitt had one of the best haircuts the world has ever seen — surpassing even the gelled cowlick perfection his running mate Paul Ryan displayed last night — and he looked more comfortable and nicer than I’ve seen him. But after telling his extended personal story, the case for a Romney presidency never really arrived.

The only argument Romney could summon was this: the economy is bad and it’s Obama’s fault. A lot of Americans are in poverty and out of work. This is bad. We need jobs, a lot of jobs.

But the Republican nominee spent no time discussing specific policies that would bring fuller employment. He did mention a few general goals — domestic drilling, expanded free trade, more job training, more school choice, lower taxes and shrinking deficits — but these hardly count as a 5-point plan for creating 12 million new jobs. In this section of his speech he claimed that President Obama will raise taxes on the middle class when in fact the middle class has never paid lower taxes and Obama pledges to reduce them further.

When it came to foreign policy, Romney turned to his usual tough talk on Iran and Russia and ludicrously argued that Obama has “thrown Israel under the bus” when in fact the President has supported the Jewish state in both word and deed. In all, the man who wants to be Commander in Chief spoke about foreign policy for about five minutes and showed zero capacity for leadership or nuance in understanding world affairs. He didn’t even mention Afghanistan. Or Syria.

The scariest moment for me was when Romney mocked the President’s commitment to confronting climate change. Here is the passage:

President Obama promised to begin to slow the rise of the oceans and heal the planet. [laughter, applause]  MY promise…is to help you and your family.

This is galling for all sorts of reasons. It implies that climate change is a joke and has nothing to do with the well being of American families. It makes fun of Obama’s concern for future generations of Americans and his felt responsibility to pass on a sustainable planet to our children and grandchildren. It encourages the audience to think of their narrow interests rather than global concerns. And it represents the anti-intellectualism and anti-scientific foundation of the Republican Party.

Enough of Tampa. On to Charlotte.

If there’s any artist who ever lived and knew color in his soul, it was Vincent Van Gogh. Almost mad with color, Van Gogh owned a box of different-colored yarn […]