March is Women’s History Month in the US. To honor this, we have a collection of seven teams of women who changed history. They are from around the world, include women of all creeds and nations, and we all owe them a debt of some kind. 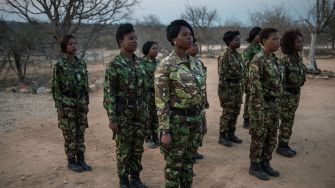 The Mambas prepare for a night watch (Getty Images)

Named after the deadly snake, the Black Mambas are a group of park rangers that protect wildlife in South Africa. Trained in tracking and combat, but working unarmed, their presence has reduced snaring of animals by 75% and nearly ended rhino poaching in areas they patrol. They are treated as local heroes and have received international attention for their efforts, including a United Nations Environmental Program award.

Their contribution to the protection of endangered animals is massive. Rhino horns are worth their weight in gold on the black market and the sharp reduction in poaching is remarkable. The Mambas also serve as a striking example of what women can do in a traditionally male occupation when given training and support. They continue to inspire conservationists around the world. 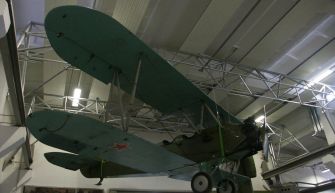 A Polikarpov, similar to that used by the Night Witches, at a museum in Germany. (Wikicommons)

Perhaps the most intimidating team on our list. The Night Witches were the members of the 588th bomb regiment of the Soviet Air Force during WWII. They flew night bombing missions, notable for difficulty in navigation and targeting, in obsolete biplanes made for training. They operated without parachutes, as the low altitude of the missions rendered them useless. The planes were unable to hold much weight, so many raids required each pilot to return to base to reload several times in one night.

During attack runs, they would turn off their engines and glide towards their targets. The Germans compared the eerie sound of the planes gliding and dropping their bombs to the sound of witches on broomsticks. When it was learned in the USSR that they had been dubbed the Nachthexen, the pilots adopted the name themselves.

23 of the pilots won Hero of the Soviet Union medals. Night Witch Nadezhda Popova was the only Soviet bomber pilot to win three Order of the Patriotic War medals for bravery. Each pilot flew more than 800 missions, and the entire regiment flew more than 24,000 missions. They were featured prominently in propaganda images and were honored for participation in critical battles. 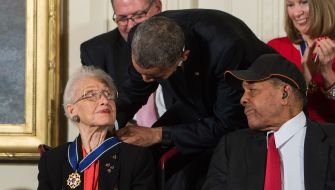 As depicted in the popular movie from a couple of years ago, NASA employed human computers to do the math needed to make the space program possible. Many of these women were African Americans who worked in segregated offices.

One of the women, Katherine Johnson,personally calculated the trajectories, launch windows, and back up routes for use on several Mercury missions, the trajectory for Apollo 11, and the return path for Apollo 13. Her work was vital to NASA’s efforts to win the Space Race, and she was awarded a Presidential Medal of Freedom in 2015.

Of course, there were others too; Mary Jackson and Dorothy Vaughan among them. The author of the book Hidden Figures Margot Lee Shetterly remarked that there were “…. teams, and those teams had other teams.” She did say that she understood that the movie couldn’t have had 300 characters, however. In an era where mechanical computers were limited, the calculator on whatever you are using to read this is much more powerful than what NASA had; humans were needed to make and double check calculations. We have gained an enormous amount of knowledge from the NASA projects of the 1960’s, and these women made the missions possible. 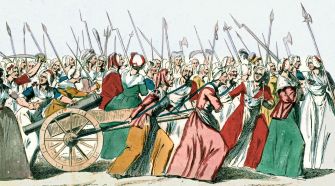 A depiction of the march (National Library of France)

On October 5th, 1789, less than three months after the fall of the Bastille, 7,000 Parisian women armed themselves with pikes and cannons and marched on the palace to demand food and the moving of the royal court to Paris. The news spread quickly, and they were joined by thousands of National Guardsmen, much to the dismay of their commander, Lafayette.

They were met by guards and soldiers intent to keep them out. A small delegation of women was allowed to meet the King and promised food. However, the crowd remained unsatisfied. After finding a single unguarded gate, the women stormed the palace and placed the heads of royal guards who got in their way on pikes.

Lafayette convinced the Royals to move to Paris to appease the crowd. This deal included the King’s acceptance of the August decrees and the Declaration of the Rights of Man.

This event is considered to be the beginning of the transfer of power from the French nobility to the people. The events of the French Revolution, bloody and glorious as it was, can be traced back to this event. The influence of their actions cannot be overstated. When asked for an assessment of the revolution two hundred years later, Chinese premier Zhou Enlai replied: “It is too early to say.” We are still reckoning with the actions of these women. 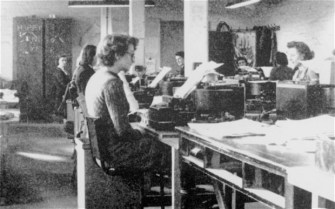 During the second world war, cracking the German Enigma code was a project of vital importance. The operations that succeeded in doing so were made famous in the film The Imitation Game. However, the film might leave you thinking code breaking was a boys club.

While most of the fame goes to Alan Turing, Enigma could not have been broken without a team. Three-quarters of the 10,000 staff members working on the project were women. They were hired for their skills in STEM fields, the German and Italian languages, and due to the shortage of men as the rest of them were off at war.

The cracking of German codes was of such importance to the war effort that the project was given a new security classification to protect the work. While Turing’s unquestionable genius was vital, the codes could never have been broken without the entire team. Their work is why this article is in English and not German.

The Women’s Social and Political Union 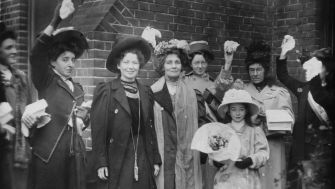 A group of suffragettes celebrating the release of Emmeline Pankurst, center, from prison. (Getty Images)

During the late Victorian Era, women’s suffrage organizations sprang up all over the world. One of the most prominent suffragettes, Emmeline Pankhurst, helped to organize an English group which would come to dominate much of the discussion. The group was women only, and expressed its militancy with the motto “Deeds, not words.”

The group pressured parliament to pass a suffrage act. The failure of parliament to respond, the arrest of several demonstrating members, and some unwise remarks by Prime Minister Henry Campbell-Bannerman lead to the group taking more drastic actions; including hunger strikes, arson, and the famous attempt to tie a banner to the King’s horse. Police attempts to re-arrest activists who were released to recover from hunger strikes were stopped by a group of members who had learned martial arts.

While the overall effectiveness of their militant actions is still debated, their ability to publicize the aims, motivations, and activities of the suffrage movement remains beyond question. It is also agreed that the more moderate suffragette movements were forced to organize better in response to the terroristic activity. Universal suffrage would likely have been delayed without their dramatic actions.

Our final team of women is, regrettably, fictional. It is a shame that they are because world history would probably have turned out better if they were real, as they manage to end a war that ended the Golden Age of Greece.

In the play, named for the title character, the women of Athens and the other major cities of Greece realize that the Peloponnesianwar is disastrous. As they lack political power and their husbands refuse to take their concerns seriously, the women declare a sex strike until peace breaks out. To further their agenda, they also storm the Acropolis and capture the Athenian treasury. The men of all city-states attempt to get the women to break the strike but are forced to make peace instead. The play is incredibly raunchy but also hilarious.

Sex strikes have been used to great effect in real life as well, most notably in Columbia and Kenya. These actions owe a great debt to the fictional women of Athens. The core concepts and themes of the play have been borrowed countless times in the 2500 years since the first production. The concept of a farce that mocks our current political troubles is a staple of film and theater, and these women are among the first in this long and hilarious tradition.

Related
The Present
Climate change is altering the chemistry of wine
Smoke taint from wildfires is gross, even to wine amateurs.
13.8
Could a hidden variable explain the weirdness of quantum physics?
We have searched and searched but have never found one.
The Past
The Wild West was lawless and chaotic — and the police helped keep it that way
Lawmen and outlaws were often the same people.
Thinking
6 great philosophers and how they used their political power
Most philosophers merely contemplate the world, but what about the ones who actually tried to change it?
Neuropsych
Asthma drug brings back “lost” memories
In a study involving mice, scientists used two different techniques — one optogenetic and one pharmacologic — to recover “lost” memories.
Up Next
Starts With A Bang
Ask Ethan: Why Haven’t We Bumped Into Another Universe Yet?
If the multiverse is real, why hasn’t our Universe, in a sea of infinite possibilities, run into another one at least once?The Universe we inhabit is vast, full of matter and […]