In this episode: Sarah Jones is a Tony and Obie award-winning playwright and performer. She’s unlike any other artist in her uncanny ability to create, become,  and instantly switch between characters, convincingly inhabiting their physicality and their consciousness. Sarah’s 2004 one woman show BRIDGE & TUNNEL channeled the symphony of voices that make up New York City’s five boroughs. She returns this fall to the Manhattan Theatre Club with SELL/BUY/DATE, in which she plays all characters in a sex-ed class from the future that doubles as a brilliant, satirical commentary on life in 2016.
On May 20th, 2016, almost exactly a year after we launched, Think Again did an episode live with Sarah Jones as part of NYC Podfest, at CakeShop NYC. Host Jason Gots knew in advance that Sarah might be slipping into and out of character, but not which characters, or when. Over the course of the hour, Sarah became and responded to the surprise discussion clips as Rashid, an out-of-work rapper, Lorraine, a Jewish grandmother, Bella, a millennial, and many more. Far from stereotypes, these were fully-fleshed people with brilliant insights grounded in their radically different life experiences.

Above all, it was a hell of a lot of fun for the 100+ people present, and we’re delighted to share it now with you.

Surprise clips in this episode: Douglas Rushkoff on collaboration in the digital economy, Angie MacArthur on types of attention, Parag Khanna on World War III 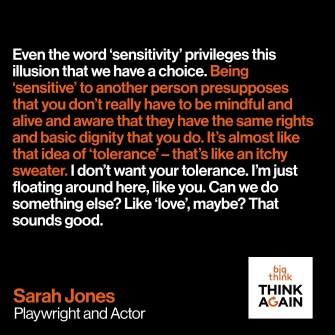 What does ‘scientific consensus’ mean?