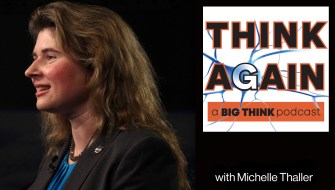 This morning on the way to the school bus, my almost 11 year old son was explaining to me that if you shrunk an elephant down to the size of a mouse, it would shiver, then die, because of its slow mitochondria, due to something called the Rule of Squared Threes, which he also proceeded to explain. Then he explained something about neutron stars, claiming that they are essentially a giant atom, which I don’t think is actually true. Then he started on another topic and I explained that this was all very wonderful but that I had learned all the science my brain could hold at 7:15 am.*

Sadly, my own journey as a scientist ended in high school biology, when I put the dissected tail of a fetal pig on a toothpick and said “Hors d’oeuvres?” to several classmates, which earned me an F for the project. But happily, there are people like my guest today, Astronomer Michelle Thaller, and my son Emre, who are excellent at explaining scientific wonders to dummkopfs like myself. Michelle is—let me take a deep breath here—the Assistant Director of Science for Communications at the NASA Goddard Space Flight Center. And her inspiring perspective on science and humanity—which she shares in her TV shows and her podcast Orbital Path—makes me wish that biology teacher had had a better sense of humor.

*Note: Emre learned much of this from this very interesting YouTube channel

The simulated decay of a black hole not only results in the emission of radiation, but the decay of the central orbiting mass that keeps most objects stable. Black holes […]