China's expanding middle class is changing the world. The results are a global recycling dilemma. 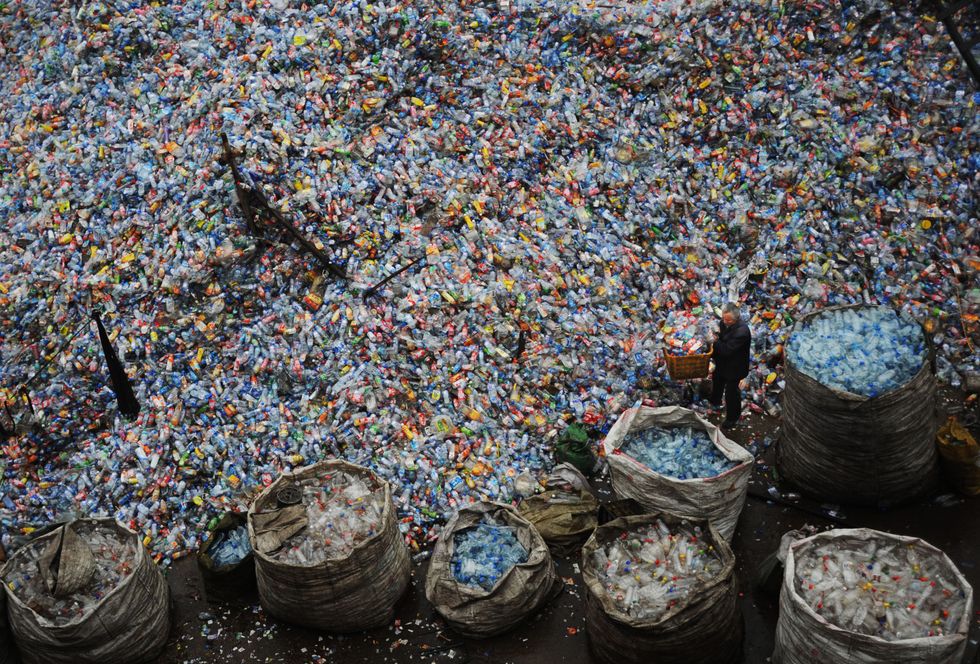 Most of us don’t think of what happens to the plastic items we put in the recycling bin. It’s a matter of out of sight, out of mind. Some believe manufacturers turn them all into new products, but is that the case? What really happens after that plastic bottle leaves your hand? In truth, only 9.5% of all plastic in the U.S. is recycled. Surprisingly, 15% is burned for electricity or heat.

About one-third is exported. Of that, half ends up in China, but not for long. The rest goes to landfills, where it can take up to 500 years to breakdown. As it does, it turns into toxins which poison our land and water. Over time, a lot of our plastic makes its way into the ocean—8.8 million tons of it enter our oceans every year, to be exact. By then, it’s become microplastics, tiny beads mere millimeters long. These are a significant threat to the environment and are also very difficult to clean up.

Pretty soon, America may be putting a lot more of its own plastic into landfill. Beginning January 1, 2018, China plans to ban the import of yang laji or “foreign garbage,” including certain plastics and other materials that are unable to be recycled. The ban was filed this summer with the World Trade Organization. Beijing has listed 24 waste products that it says are a threat to China’s environment and public health.

As of Jan. 1, China is banning the importation of "foreign garbage." Credit: Getty Images.

As a manufacturing powerhouse, China has imported waste materials from other countries to help fuel its economic rise for several decades. It turned these plastics from abroad into resin, which was made into carpeting, plastic bottles, pipes, and all other manner of items. But now, a robust Chinese middle class with more Westernized consumption habits produce enough material to fill China’s needs from within.

As such, Beijing filed its ban with the WTO last July, which includes certain plastics, textiles, and mixed paper. It isn’t only America that’ll have to make other arrangements. China is the world’s biggest importer of such waste. It took in 7.3 million metric tons of plastic last year. This accounts for 51% of the world’s total plastic scrap.

The West Coast of the US has been particularly hard hit. In many cases, recyclers have nowhere to put these materials. Some operations are hauling them off to landfill to dump. Steve Frank of Pioneer Recycling in Portland, Oregon, told NPR that once China shuts down operations completely, it’ll become a serious problem. "The rest of the world cannot make up that gap,” he said.

Hopes for an End to Plastic

Rather than burning plastic refuse and contributing to global warming, storing it until a market opens up, or sending it to the landfill, many in recycling and environmental sciences believe this could be a watershed moment where we finally change our relationship with plastic. Bans on disposable plastic are one route. Some cities, states, and even whole countries are banning plastic bags, for example, producing or selling plastic bags is now illegal in Kenya, with a fine of $40,000 as a consequence. An awareness campaign to steer consumers away from plastic and toward other, more sustainable options might also make an impact.

Many believe it’s time for us to change our relationship with consumer plastics. Credit: Getty Images.

Rather than a problem, the U.S. chemical industry may see it as an opportunity, at least somewhere down the line. One solution for all this waste nobody wants, is to break down discarded plastic into its chemical components for use by the petroleum industry. Others such as aviation, transportation, and food packaging might also find uses.

The U.S. fracking boom has made natural gas incredibly cheap for the moment, which makes the U.S. one of the cheapest places in the world to produce plastic. The chemical industry is looking to capitalize, investing $185 billion to expand its capacity, according to the American Chemistry Council. Four new U.S. plastics plants will be operational by the end of 2017. The industry is planning to produce and ship high quality resin to China for profit, as the nation is shifting to a preference for "virgin" plastics, rather than plastic scrap that must be cleaned, processed, and so on. Ultimately this means more plastic in the world, not less, as profit opportunities are prioritized over long-term consequences.

Look at what plastic you buy and throw out on a daily or weekly basis and try to replace those items with sustainable alternatives. For instance, opt for reusable water bottles, sandwich bags, food storage bags, shopping bags, and other such things. When it’s time to buy something, try to purchase items made from natural materials such as bamboo, wood, cloth, or glass.

Repurpose and reuse as many things as possible before throwing them away (if you must). Remember the mantra: Reduce, Reuse, Recycle. And check with your town’s department of public works about what items are and aren’t recyclable. Though we assume so, not all plastic is. In fact, many aren’t. To find out which is which, click here.

Lastly, write to three (or more) of your favorite brands, restaurants, or cafes and ask them to change their packaging to use less plastic. Let them know it is important to you, and encourage friends and family to do the same. Evolving habits and consumer pressure matters to companies that want to remain competitive.

Should we shoot our garbage into space and solve the problem that way? See what Bill Nye thinks: