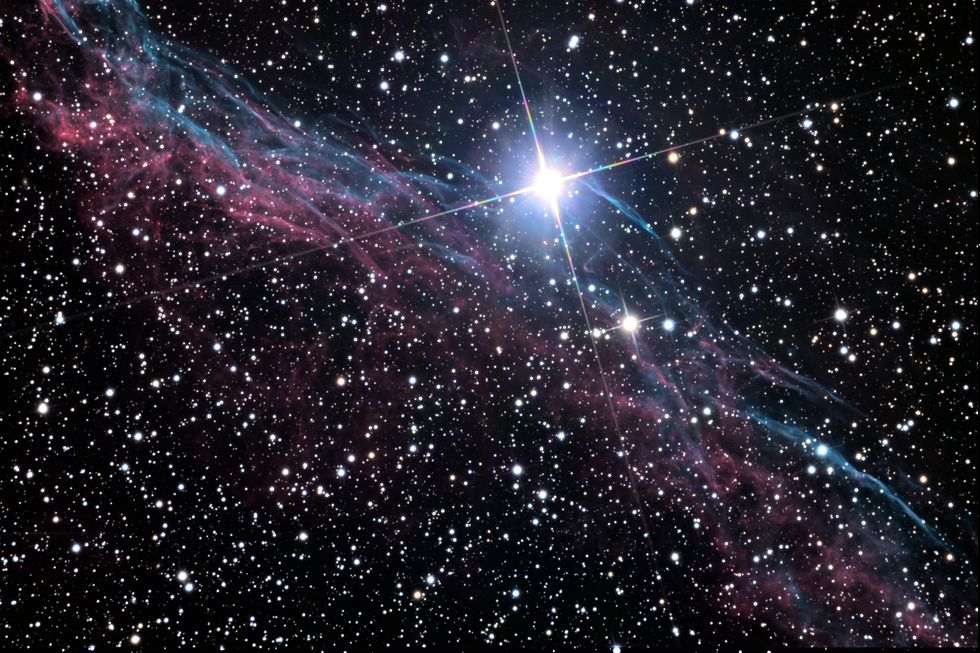 The Veil Nebula. Credit: By Jschulman555 - Own work, Wikipedia Commons.

What CERN scientists say as a result of their latest experiment is: the universe itself is a miracle, as it shouldn’t exist at all. This is of course taken in reference to the Big Bang theory. Though the prevailing one, it’s not the only theory to explain how all and everything came into being. Still, in this view, it all starts with the singularity.

According to the Big Bang, the universe began as a point the size of a grain of sand that was unimaginably hot, unfathomably dense, and packed tight with matter and energy. Then of course it exploded, sending its contents sailing out and eventually, forming the universe as we know it. There’s a few problems with this theory. For one, there’s the increasing rate of universal expansion, known as the Hubble Constant. According to the Big Bang, things should be slowing down, or even contracting. Dark energy is the conventional explanation, even though we can't prove it exists.

There’s another problem and here’s where the CERN scientists come in. The environment that produced the particles that make up the universe, as we know them now, should have created equal parts matter and antimatter. Yet, the latter is surprisingly rare. Not only that, a 50-50 split would’ve seen each particle uniting with its polar opposite, creating a burst of unimaginable energy and leaving nothing behind, save a vast howling void of a cosmos. And yet, here we are.

Particle physicists in the BASE collaboration at CERN have been investigating the matter-antimatter imbalance. Credit: Getty Images.

One theory is that matter and antimatter must in some way be radically different. But the latest CERN experiment does not find this is the case. According to the Standard Model of physics, a  manual for every known particle in the universe and how it operates, each type of atom has its polar opposite, its antiparticle, with the same mass, but with an opposite electrical charge.

In this study, CERN scientists tried to discern what fundamental difference such particles should have, to validate the existence of the cosmos. They came up empty. Physicists in the BASE collaboration at CERN, studied the magnetic properties of protons and antiprotons with uncanny precision. Some good news: the findings did support the Standard Model, as the particles behaved just as it predicts.

The matter-antimatter imbalance, as it’s called, is a popular topic among particle physicists these days, with many teams around the world looking into it. CERN researcher Christian Smorra was on the team who conducted the most recent experiment. He told Science Alert, "All of our observations find a complete symmetry between matter and antimatter, which is why the Universe should not actually exist."

He added, "An asymmetry must exist here somewhere but we simply do not understand where the difference is. What is the source of the symmetry break?" He and his colleagues' findings were published in the journal Nature.

When matter and antimatter particles collide, a burst of pure energy is the result. If these were perfectly balanced in the early days of the universe, how could the cosmos exist at all?  Credit: Getty Images.

Protons and antiprotons were the last holdout when it came to particles which could explain the matter-antimatter imbalance. Scientists from Mainz University in Germany devised a manner to assess the magnetism of a particle of antimatter that is 350 times more precise than the previously method. The readout was incredible, to nine places!

-2.7928473441 nuclear magnetons. A proton has the same level of magnetism, only it's positive. Although the study failed to explain our universe’s extreme prejudice towards matter, it did give us a far better understanding of an antiproton’s magnetism.

Antimatter doesn’t last long. As such, it needs to be contained. Researchers used two Penning traps, which are devices that retain antimatter particles using an electrical and a magnetic field. Stefan Ulmer, spokesperson for the BASE collaboration at CERN, said in the press release:

“The measurement of antiprotons was extremely difficult, and we had been working on it for ten years. The final breakthrough came with the revolutionary idea of performing the measurement with two particles. This result is the culmination of many years of continuous research and development, and the successful completion of one of the most difficult measurements ever performed in a Penning trap instrument.”

New plans in the works may unveil the secrets of the matter-antimatter imbalance. Pictured here: The Lagoon Nebula in Sagittarius. Credit: Hewholooks, Wikimedia Commons.

Up until now, scientists have probed the differences between particles and their opposites by comparing their electrical charge, magnetism, and mass. Next, this team plans to investigate them in terms of gravity, to see if a discrepancy exists there. Another international collaboration based at CERN, called ALPHA, will be studying what asymmetry, if any, exists between hydrogen and antihydrogen atoms. The BASE team meanwhile, also plans on further examining antiparticles magnetically.

Another important development at CERN, a new linear accelerator introduced at the facility in May, will allow the Large Hadron Collider (LHC) to reach greater luminosity by 2021. CERN Director General, Fabiola Gianotti, said at its unveiling, “This high-luminosity phase will considerably increase the potential of the LHC experiments for discovering new physics and measuring the properties of the Higgs particle in more detail.” Perhaps discoveries made here will help unravel the secret behind the matter-antimatter imbalance.