A children’s hospital is “the first of many solar + storage projects going live” on the island, Elon Musk announced. 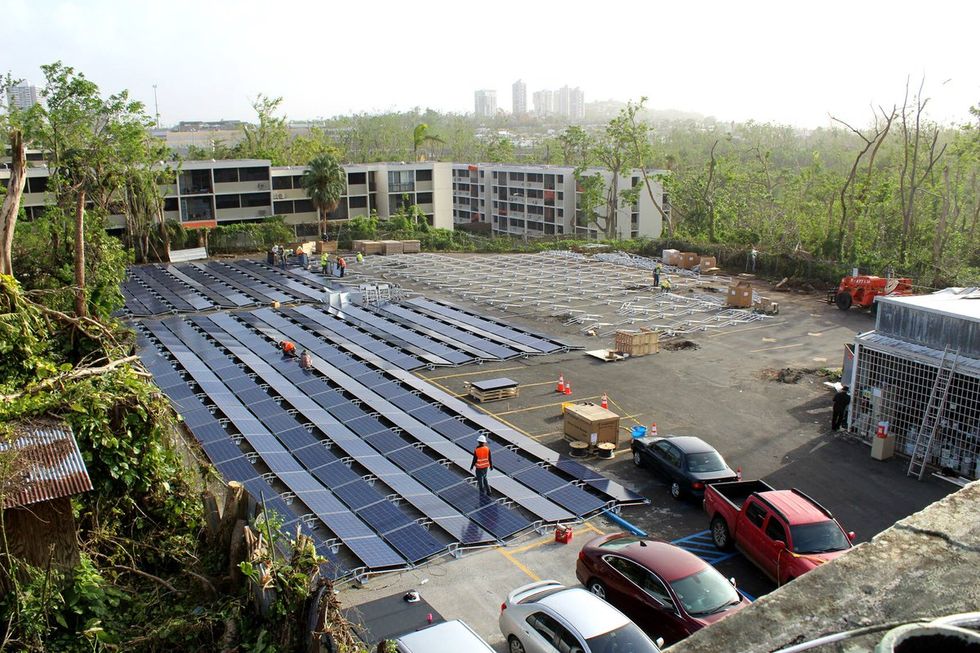 Hurricane Maria, a category 4 storm struck Puerto Rico, a US territory, on September 20 flattening it. The island was already in trouble with crumbling infrastructure, soaring debt, and an antiquated electrical grid. This wiped all three out, at least for the time-being.

The total devastation could cost between $45-90 billion. And the destruction has had a significant impact on the agricultural, pharmaceutical, and tourist industries... upon which much of the island’s economy depends. While its inhabitants are technically US citizens, critics have argued that the Trump administration has been slower to respond and less robust in doing so, than in Florida and Texas, both recently ravaged by extreme weather events.

Today, the island faces lack of cell phone service, food and water shortages, and the growing fear of a water-borne disease epidemic. The death toll stands at 51. Meanwhile, over 3,000 still live in shelters two months after the hurricane made landfall.

Only about 25% of Puerto Ricans today have power, and some places on the island are expected to be without electricity for months. Analysts say it could take six months to restore electricity to the entire island. This is in stark contrast to the situation in Florida after Hurricane Irma, where 95% of the state’s power was restored within a week.

It all started with a tweet. Tesla CEO and founder Elon Musk tweeted back. Credit: Getty Images.

Part of the difference in response is because the territory’s grid was far more antiquated. It was more than a half-century old. The Puerto Rico Electric Power Authority experienced mounting debt in recent years which the island’s citizens have been paying down. In addition, Hurricane Irma which hit the island only a week prior destroyed much of the grid. Maria finished it off. Still, some argue that compared to the number of workers who ameliorated Florida’s power woes, the number of technicians sent to Puerto Rico is underwhelming.

Earlier this week, a small Montana outfit called Whitefish Energy Holdings, announced a $300 million contract with Puerto Rico's electricity authority, to restore over 100 miles of power lines. But the island has 2,500 in all. So what now? Is Puerto Rico stuck? Fear not dear friends, its Tesla to the rescue! On Tuesday, Oct. 24 CEO Elon Musk announced the successful installation of Tesla’s Powerpack commercial energy storage batteries and solar panels, restoring power to Hospital del Niño, a children’s hospital in San Juan. It serves about 3,000 patients, 30 of which are in serious condition and require 24-hour care.

It all started back Oct. 5 when on Twitter, one Scott Stapf asked Elon Musk if he could restore power to the island with Tesla’s solar panel and battery systems. The tech leader replied, “The Tesla team has done this for many smaller islands around the world, but there is no scalability limit, so it can be done for Puerto Rico too. Such a decision would be in the hands of the PR govt, PUC, any commercial stakeholders and, most importantly, the people of PR.”

Puerto Rico Gov. Ricardo Rossello reached out to Musk. The two had “a great initial conversation,” according to the governor and after several more, they announced plans to get the hospital’s power needs met. Three weeks later, it’s outfitted with a solar field out back and all the juice it needs. Rossello and Puerto Rico’s Chief Innovation Officer Glorimar Ripoli, have discussed with Musk, Tesla using the island as a model to show how their solar and storage systems can transform electrical grids across the world.

Rossello has promised all the lights will be on by Christmas, which analysts say may be unrealistic. Bloomberg News reported a phone interview with Puerto Rico’s Department of Economic Development and Commerce Secretary, Manuel Laboy, on Sunday. He said the San Juan government was hoping that the US federal aid package they were receiving can act as an opportunity to upgrade the grid and reinforce it, in order to withstand the next epic hurricane.

Meanwhile, Tesla tweeted out pictures of its initial efforts and said it was “the first of many solar + storage projects going live” in Puerto Rico. In addition, the company has been sending over its Powerwall battery storage units. Its batteries and solar panels are going to build microgrids all around the island. Hospital del Niño was just the first.

Still, questions remain. Funding and the scope of the project haven’t been delineated and queries have gone unanswered. Tesla is putting a lot of effort forth, however. It pushed back the announcement of its all electric semi-truck to November, to focus on helping restore the island’s grid. Musk himself donated $250,000 to help Puerto Rico get back on its feet. And he said they’re ramping up battery production in order to meet the island’s needs.

To learn more about this development, watch this: