Glacier McGlacierface? Not likely. NASA has set some classy themes that will guide the naming of geographical features of Pluto and its moons. 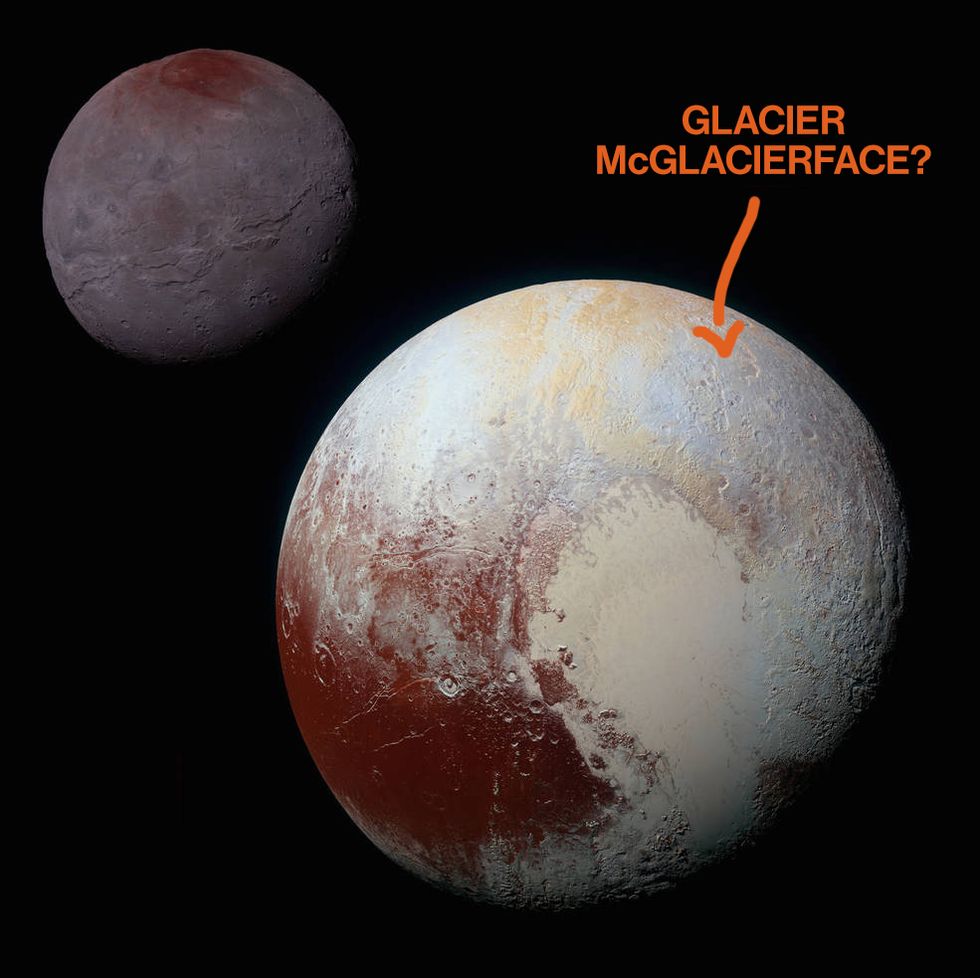 Pluto and its largest moon Charon. Photo by NASA.

Pluto was discovered by American astronomer Clyde Tombaugh in 1930, after an exhausting effort. Since that time, a segment of the public has grown fond of the frozen little body, careening on the edge of our solar system. In 2006, Pluto lost its planetary status, which resulted in an international outcry from space fans and a bizarre movement to reinstate it.

It wasn’t so much that Pluto had changed, but that the criteria of what a planet is was updated. It met the first two requirements—it orbits the sun and contains sufficient gravity for a nearly round shape. But since Pluto shares its orbit with other objects in the Kuiper Belt, it can’t regain full status. A planet must dominate its own gravitational orbit. So today, Pluto’s considered a dwarf planet.

The downgrade hasn’t ended the affection astronomers and space enthusiasts feel for it. Instead, interest has piqued, especially since the New Horizons spacecraft flew past Pluto in 2015, giving us our first really good look at its surface, as well as glimpses at its moons. This is when the famous photo of what looks like a heart on Pluto popped up all over the internet. Turns out, this pint-sized planet has vast canyons, craters, ice-covered mountains, and even a methane glacier.

Then they teamed up with The International Astronomical Union (IAU), the organization responsible for naming celestial bodies and their geographic features. The two organizations wanted to figure out a novel way to give discoveries permanent names. In 2015, they decided to create a campaign to involve the public.

The New Horizons spacecraft which flew by Pluto in 2015. Another mission is scheduled for 2019. Photo by NASA.

They have now decided on a theme – well, a few actually. Considering Pluto’s status in the Roman Pantheon, officials decided that underworld mythology would be a theme. Another theme is famous explorers or scientists, to highlight the expedition’s great achievements, attained through the “human spirit of exploration,” according to the announcement.

Here are the guidelines taken directly from the IAU’s press release:

●    Gods, goddesses and other beings associated with the underworld from mythology, folklore and literature

●    Names for the underworld and for underworld locales from mythology, folklore and literature

●    Heroes and other explorers of the underworld

●    Scientists and engineers associated with Pluto and the Kuiper Belt

●    Historic pioneers who crossed new horizons in the exploration of the Earth, sea and sky

●    Destinations and milestones of fictional space and other exploration

●    Fictional and mythological vessels of space and other exploration

●    Authors and artists associated with space exploration, especially Pluto and the Kuiper Belt

Themes for Pluto’s smaller moons are:

The Our Pluto campaign is allowing the public a new and exciting way to get involved in space exploration. Photo by NASA.

The large, heart-shaped space on Pluto’s surface will be officially named the "Tombaugh Regio," after the planet’s discoverer. One large, dark, crater-filled region has been informally dubbed Cthulhu, the ancient sea demon, from the works of horror writer, H.P. Lovecraft. Sci-fi fans will be happy to hear the names of two craters on Charon: the Skywalker Crater and Vulcan Planum. These are likely to stick, we’re told.

In early 2015, the IAU and NASA’s New Horizon’s team, launched the Our Pluto campaign, to help highlight the mission and garner names for geological features yet to be discovered. Members of the public, the SETI Institute of Mountain View, Calif. also contributed. Some of the official names will be selected from the database containing those responses, if they fit the themes. New Horizons' Principal Investigator Alan Stern told Space.com, "We look forward to the next step — submitting actual feature names for approval."

Unfortunately, no timeline has been announced, yet.

To get a good look at Pluto’s surface, click here: