The mission might set a precedent for exploring bodies of water on other moons and worlds as well. 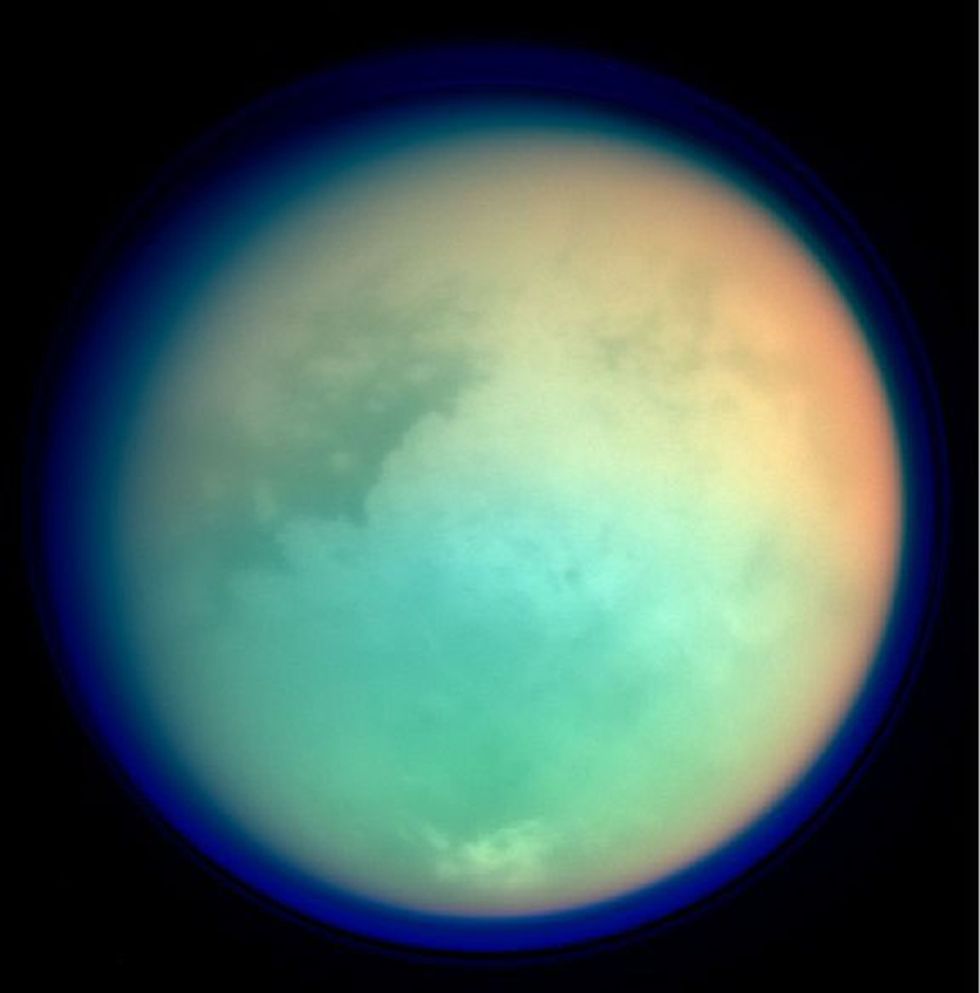 Of all the bodies in our solar system, Saturn’s moon Titan is one of the likeliest to harbor life. That’s because it has an atmosphere and its surface is covered by lakes and seas of hydrocarbon. Due to this, NASA has proposed a concept for a mission—plunging a robot-driven, nuclear submarine into Titan’s largest, northerly sea, called Kraken Mare. This body of “water” is 1,000 kilometers (600 miles) wide and 300 meters (1,000 feet) deep. It’s as large as Lake Superior. The concept was announced by cryogenics engineer Jason Hartwig, at NASA’s Innovative Advanced Concepts (NIAC) Symposium, last August.

Donned the Titan sub, the autonomous vehicle would be six meters (20 ft.) long, with that typical submarine shape and have two ballast tanks, one on each side, for diving and resurfacing. Other features include a conning tower with cameras and sensors, and a long fin across its back, serving as an antenna, which would relay data back to earth. Four propellers in the rear would propel it. The sub would be replete with cameras and a vast array of scientific instruments. Barring anything unforeseen (like being eaten by an extraterrestrial sea monster), it could have a long life. At its heart, two advanced Stirling Radioisotope Generators, fed on a slug of plutonium 238.

Proposed model of the Titan sub.

In a mission concept explanation, scientists explain that the sub would “…investigate a full spectrum of oceanographic phenomena: chemical composition of the liquid, surface and subsurface currents, mixing and layering in the ‘water’ column, tides, wind and waves, bathymetry (study of the sea bed), and bottom features and composition.” It would even sample the silt at the bottom, to learn about the environment and search for organic compounds. If successful, the mission could set a precedent, giving NASA a new method for exploring bodies of water on moons and planets, such as the frozen oceans of Europa, one of Jupiter’s moons. This is the second most likely candidate for life in our solar system, after Titan.

The sub would travel a total of 1,000 kilometers (621 miles) and plunge depths estimated at 300 meters (approx. 984 ft.). Landing might be tricky. The Mars rovers Opportunity and Curiosity landed through a parachute and pod system. This is unlikely to work on a liquid surface.

Ralph Lorenz is the lead designer of the Titan sub. He comes from Johns Hopkins University’s Applied Physics Laboratory (APL). Lorenz proposes placing the sub within a space plane. The Air Force has such a plane, designed by DARPA, which few outside of the top brass know the details of. We do know that the unmanned X-37B has been tested several times, successfully, in space, orbiting earth for months at a time.

Lorenz believes the sub could fit inside the cargo bay of such a plane. The plane could land on the so-called water and deliver the sub smoothly into Titan’s sea. How the space plane would arrive there however is still unclear. Another issue might be signaling back to earth. A relay satellite may be required to make sure the data was received by NASA.

So why Titan? This is one of the only bodies with complex meteorology, complete with clouds and an atmosphere. Another reason is the tremendous, though freezing cold seas. According to Lorenz, "Only Titan and Earth have open bodies of liquid like this." Scientists believe Titan may be something like how earth was in its early days. The difference is that Earth, being closer to the sun, is far warmer. Any life found on Titan would be far different from that on our own planet. Its seas are mostly liquid methane and ethane.

With cyanide clouds and methane rain, and with very little oxygen, humans would not last long on its surface, unprotected. Still, the moon is believed to be rich in organic compounds. Besides these lakes and seas, its landscape is composed of ice, dunes, and rocks, so it may remind us of home, somewhat. This is the most earth-like body in space discovered thus far, with similar atmospheric and water cycles as our own planet. In this way, Titan hints at the possibility of big scientific discoveries.

Lorenz said of the moon, "Titan can inform us on the chemical processes that lead to life (as we know it, based on liquid water)." He went on "There is also the possibility, albeit a remote one, of alternate chemical systems executing the functions of life—metabolism, information storage and replication, etc.—in a completely different solvent: liquid methane."

After making it to Kraken Mare, the sub would deploy its periscope camera, to observe the shorelines of the sea and map it. It would also use sonar to map its bottom. The sub would then employ sensors to check out the sediments on the seafloor—which will show the moon’s climate history, the liquid composition of the sea, and the presence of any organic components.

This mission wouldn’t occur until around 2040. Scientists call the idea of photos from Titan “game changing.” And few space enthusiasts can help but be gitty at the idea of landing a robot sub on another planet’s moon. What’s more, finding organic compounds there could potentially give us insights into how life might develop elsewhere in the galaxy.

To see NASA's concept video for the mission click here: