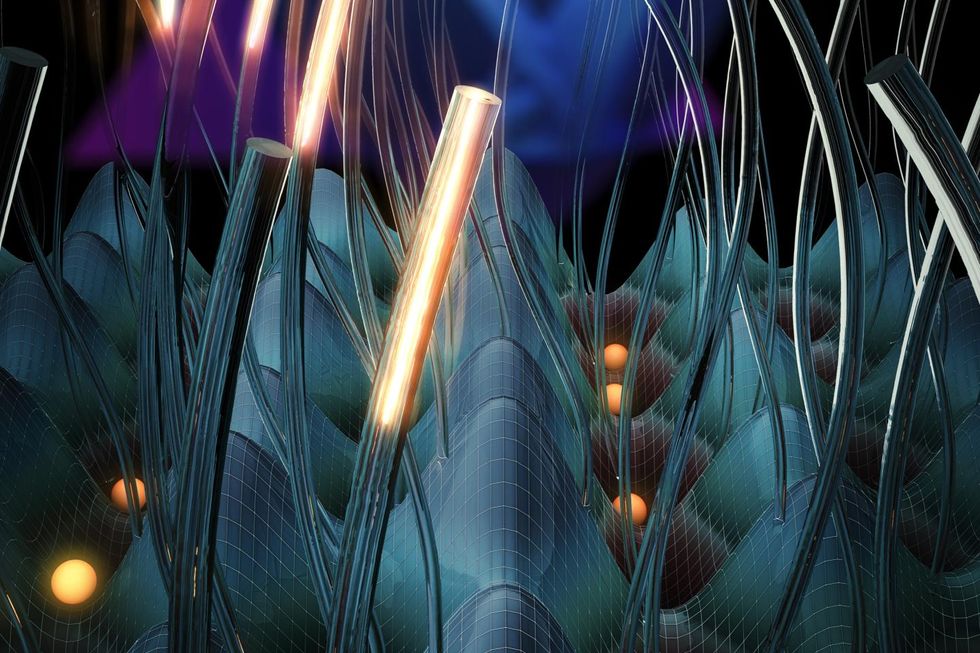 Even if there are other dimensions somewhere out there in our universe or in others, should we travel to a place which includes them, scientists aren’t so sure we could even experience them. Our brains may be incapable. Mathematically, we can describe the 4th dimension but we may never experience it in the physical realm.

Even so, that hasn’t stopped us from looking for evidence of higher dimensions. One model which helps us conceive of it easier and understand it better is a tesseract or hypercube. This is a cube within a cube. Though a helpful metaphor, it doesn’t actually exist in the real world. So how might scientists actually detect the 4th dimension? Two separate research teams, one in the US and one in Europe have completed dual experiments, to do just that.

Both of these were 2D experiments which hinted at a 4D world, utilizing a phenomenon known as the quantum Hall effect. The Hall Effect is when you have an electrically conducive material, say a sheet of metal or a wire, which you pass current through. The electrons move in one direction. Place a magnetic field perpendicular to the material and instead of electrons get diverted to the left or right, by what’s called the Lorentz force.

The result of the Hall effect is that electrons get stuck within a 2D system. They can then only move in two directions. The quantum Hall effect occurs at the quantum level, either when the material is at very low temperatures, or is subject to a very strong magnetic field. Here, an additional thing happens. The voltage doesn’t increase normally but instead, jumps up in steps. By restricting electrons with the quantum Hall effect, you can also measure them.

Follow the math and you’ll realize that the quantum Hall effect is also detectable within a 4D system. Professor Mikael Rechtsman of Penn State University was part of the American team. He told Gizmodo, "Physically, we don't have a 4D spatial system, but we can access 4D quantum Hall physics using this lower-dimensional system because the higher-dimensional system is coded in the complexity of the structure."

We ourselves as 3D objects cast a 2D shadow. A 4D object should then cast a 3D shadow.  We can learn something about a 3D object by studying its shadow. So it stands to reason that we could also gain knowledge about a 4D object from its 3D shadow. Both teams in these experiments did something of that kind. They used lasers to catch a glimpse of the 4th dimension. The results of each experiment were published in two reports, both in the journal Nature.

In the European experiment, scientists took the element rubidium and cooled it down to absolute zero. Then, they trapped atoms there within a lattice of lasers, creating what researchers describe as, "an egg-carton-like crystal of light." Next, they introduced more lasers to excite the atoms, creating what’s known as a quantum “charge pump.” Though atoms themselves don’t have a charge, here they simulated the transport of electrical charges. Subtle variations in the atoms’ movements coincided with how the quantum Hall effect would play out in the 4th dimension.

To hear an explanation of the 4th dimension using a video game, click here:

In the US experiment, glass was used to control the flow of laser light into the system. This was basically a rectangular glass prism with a series of channels within it, which looked like a number of fiber optic cables stuck inside, running the length of the box and terminating at both ends. Researchers were able to manipulate the light using these channels as wave guides, in order to make it act like an electric field. When light jumped from opposite edges into the corners, researchers knew they had observed the quantum Hall effect, as it would occur in a 4D system.

Scientists at ETH Zürich, a university in Switzerland, conducted the European experiment. Researcher Oded Zilberberg was among them. He said that before these experiments, observing actions occurring in the 4th dimension seemed more like science fiction.

In these experiments, the photons and electrons didn’t interact. In the next, scientists believe it might be interesting to see what happens when they do. Rechtsman claims we could gain a better understanding of the phases of matter by investigating the 4th dimension. Say we get a healthy grasp of it, is that the end? Certainly not. Theoretical physicists believe there may as many as 11 dimensions.

To learn about the 4th dimension from Carl Sagan himself, click here: