Does the Story of Adam & Eve work scientifically?

How much genetic diversity is actually needed to keep a population healthy? 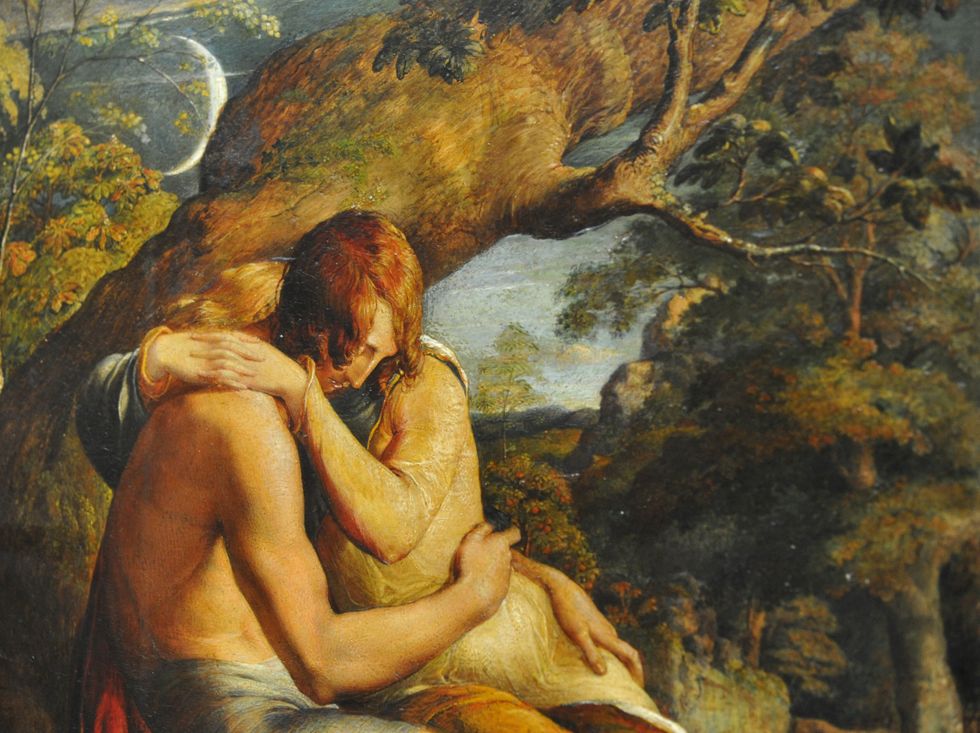 The Bible’s creation myth is famous the world over. It’s also helped shape Western civilization. According to Stephen Greenblatt’s book, The Rise and Fall of Adam and Eve, "Over many centuries, the story has shaped the way we think about crime and punishment, moral responsibility, death, pain, work, leisure, companionship, marriage, gender, curiosity, sexuality, and our shared humanness." What’s called into question is not its influence or importance, but the literal idea encapsulated within one of humanity’s most famous origin stories.

Could two people literally populate the Earth? It’s highly unlikely. Why? One reason, such a scenario would’ve made it difficult for humans to become the dominant species on Earth. In 2013, a team of researchers determined the minimum size population required 60,000 years ago for humans leaving Africa to eventually become the top species. For worldwide expansion to be successful, 2,250 individuals would be needed to make the journey northward, into Europe, Asia, and the Middle East, while 10,000 were thought to remain back in Africa.

This is a conservative estimate. Population geneticists came upon it by looking at population sizes and calculating back reasonable estimates on mutations rates and other genetic factors, to see how small a population could exist and still allow for the high level of genetic variation that we see today within the human species.

Another reason, to survive and thrive, a species needs a diversity of genes. The children of two people are obviously siblings and the product of those unions would be cousins. Children born to parents who are closely related genetically, are more likely to suffer from physical, mental, or developmental disabilities.

An incest taboo is universal the world over and for good reason. One study looking at Czechoslovakian children born between 1933 and 1970, found that almost 40% of those who had parents who were first-degree relatives carried some type of severe handicap. Such inherited diseases are rare and usually occur when two copies of the same gene are passed on by a person’s parents.

Carrying recessive variants isn’t a problem, if we get it from only one parent. In fact, almost everyone alive today carries one or two genetic variants that could be deadly. But they aren’t realized, because we’ve inherited only one copy. It’s when a person has two devastating recessive gene variants that a problem occurs, and that’s far more likely in the case of inbreeding.

The population of the Pingelap atoll shows a perfect example of the founder effect. Credit: Wikipedia Commons.

Consider the island of Pingelap in the Western Pacific. After a typhoon nearly wiped out the population in the 18th century, just 20 survivors got to work repopulating the island. Among them, there were carriers of achromatopsia, a rare recessive disorder which causes complete and total colorblindness. Today, it effects 10% of the atoll’s population. They became victims of the founder effect, which is when a lack of genetic diversity effects a population.

Another example, consider the royal families of Europe who intermarried to keep power within their ranks for centuries. Charles II is one of the most extreme examples. He had a number of mental and physical disabilities, was infertile, and didn’t learn to walk until the age of 8. An extremely high “inbreeding coefficient” was the reason. He had less diversity in his genes than if his parents had been siblings.

Humans actually select a mate partly based on how dissimilar the other person’s genes are. We are naturally attracted to those who have different immune genes than we ourselves carry. The idea is that having a variety of immune system genes will give offspring a much better chance of survival.

Say a cataclysmic event happened, wiping out almost all the people on Earth, or that we wanted to colonize another planet. How many individuals would you need to create a healthy human society? Dr. Philip Stephens from Durham University in Australia told the BBC that 50 individuals could keep the human race going, without falling into the founder effect.

500 would offer a diverse enough gene pool to allow offspring to adapt to new situations or a novel environment. And 500-5,000 would be needed to cover for random losses when genes are passed down from one generation to the next.

Today, chimpanzee populations have more genetic diversity than all the humans on Earth, all 7 billion of us (and counting). The reason is the human population hit a bottle neck between 50,000 and 100,000 years ago. Back then, there were only 1,000 humans on Earth at any one time, over the course of about a million years.

So these numbers aren’t absolute. “The evidence for the short-term effects of low genetic diversity is very strong,” Dr. Stephens said, “but all these things are probabilistic. There are stories of incredible journeys back from the brink – anything is possible.”

Although there may not have been a literal Adam and Eve, our species has a “genetic Adam” and a “mitochondrial Eve.” Our genetic Adam was a man who’s Y-chromosome has been passed down in an unbroken chain starting in Africa, approx. 125,000 to 156,000 years ago. Although some other studies offer different time frames, the results are the same.

He wasn’t the first man on Earth, but the one who was lucky enough to have his genetic information passed on up until the present today. Rather than being the first female of a species, our “mitochondrial Eve” is the first female to pass on her mitochondrial DNA across generations of females, leading up to today.

Researchers believe it’s unlikely that our genetic Adam and Eve knew each other, and certainly they weren’t the first people on the planet. They were just lucky enough to pass on their genes and see them passed down again and again in unbroken lineages throughout human history, continuing up to the present and beyond.

To learn more about our genetic Adam and Eve, click here: