C-Sections May be Altering the Course of Human Evolution

In some countries at least, the “obstetrical dilemma” has been solved by modern medicine. 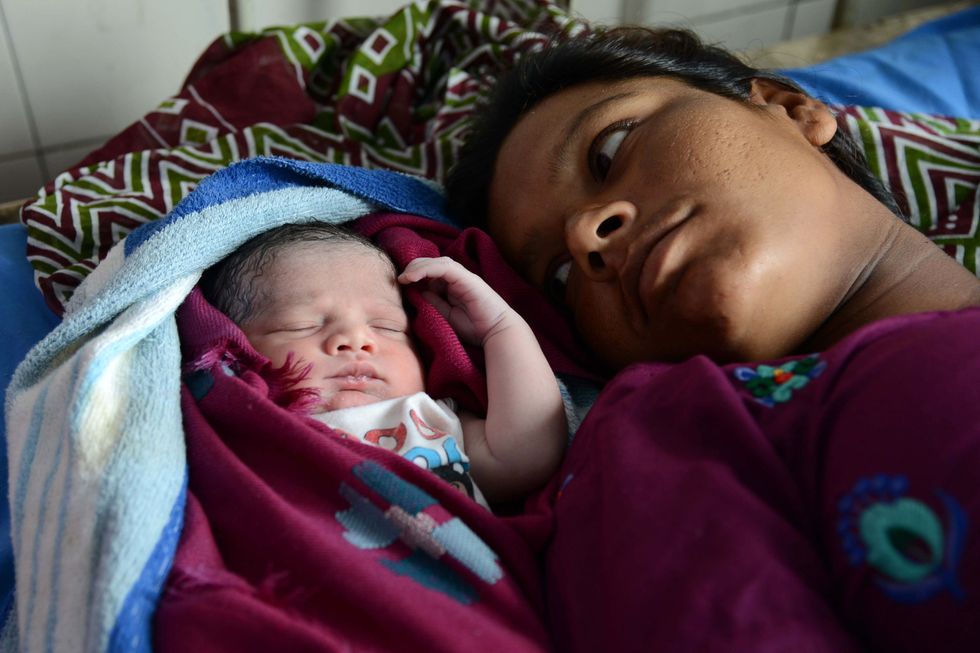 Mother with her newborn child.

Caesarean sections have been performed for hundreds of years. Although named for the Roman Emperor, there is no evidence he was actually born this way. Traditionally, the procedure was performed in cases where the mother was dying, in order to save the child’s life. Today, around one-third of US births are C-sections.

While in some instances, the mother cannot deliver the baby normally without risk to her or the infant, those children born naturally have stronger immune systems, and a lower chance of obesity. This is perhaps due to picking up crucial bacteria from the mother’s microbiome while moving through the birth canal. Now, a new study finds that the prevalence of this procedure has even greater complications, not just for the individual, but for the entire human race.

One of the issues C-sections solve is mothers with narrow pelvises. Human children are actually born prematurely compared to other mammals. That’s because our large brain cases become too big to pass through a narrow birth canal. Unfortunately, evolution hasn’t changed the female pelvis all that much, while infants have become larger. Larger babies have a higher rate of survival. At the same time, women’s pelvises have become smaller over time to aid bipedal locomotion and limit premature birth.

The problem revolves around what is known as the obstetrical dilemma. From an evolutionary standpoint, the need for walking upright is fighting against the need to be able to accommodate a child during birth. The rise in C-sections has given locomotion the upper hand. As a result of the rapid increase in C-sections in the last few decades, those mothers with narrow pelvises are more likely to pass on their genes.

Theoretical biologist Philipp Mitteroecker was the lead researcher in this study, which looked at the effects of rising C-sections on human evolution. Mitteroecker is an assistant professor at the University of Vienna. "Our intent is not to criticize medical intervention,” he said, “but it's had an evolutionary effect.” Instances where the child cannot make it down the birth canal have increased globally. The rate went from 30 in 1,000 births in the 1960s to 36 in 1,000 today. In other words, worldwide, the rate was 3% globally in the 1960s, and now it is 3.6%, an increase of 10-20%. That’s a significant change in a very short period of time.

The study first began when Mitteroecker and colleagues wondered about fetopelvic disproportion – the condition where the baby doesn’t fit through the birth canal. Why was the rate of this condition so high worldwide?  To find out, they constructed a mathematical model and fed it obstructed childbirth data obtained from the World Health Organization (WHO).

Dr. Briana Pobiner is a paleoanthropologist at The Smithsonian. She told the BBC that these findings aren’t exactly uniform globally. The practice of cesarean birth varies in different countries and cultures throughout the world. Other experts pointed out health-related factors such as higher obesity and diabetes rates. Birth by C-section is less risky for those with such metabolic conditions.

Besides more women with narrow pelvises, larger babies may also be an evolutionary trend. Though all of this sounds worrying, Mitteroecker and colleagues say it doesn’t spell the end of natural childbirth. However, they do believe this upward trend in the number of C-sections worldwide is likely to continue, albeit slowly. More studies will have to be conducted to verify the relationship between the uptick in C-sections and the effects on natural selection. Dr. Mitteroecker and colleagues hope this sparks a debate surrounding how and when a cesarean should be performed. According to the WHO, 10-15% of all births should be delivered in this manner.

To learn more about the impact of C-sections and other aspects of women’s health, click here: