We all know a person who is unable to control their impulses. The friend who always buys the one thing they like but don’t need, the one who drinks just a little too much, the one who can’t finish their work because they need to check twitter for a second; all of them attract a little bit of our disapproval.

This is often justified, as impulsivity is positively correlated with all kinds of substance abuse. Impulse control disorders are recognized by the Diagnostic and Statistical Manual of Mental Disorders as being real and problematic. Those disorders also correlate with various other mental and physical health problems.

Experimental data also shows that impulsivity can lead to negative life outcomes. Famously, the Stanford Marshmallow Experiment found that preschoolers who were better able to delay gratification went on the have higher SAT scores, education levels, and better emotional coping ability than their peers who gave in to impulse right away.

However, there are a few things to be said in favor of impulses.

In her article, Dr. Rebecca Brown articulates why we might want to give impulses a little more credit. While she acknowledges that our brain’s automatic responses can be irrational, and isn’t arguing that we should jettison rational thought for following our every whim, she does remind us that habits needn’t be harmful and that just because our subconscious is running things isn’t proof things are going badly.

She firstly reminds us that our impulses, even when they tend to irrational biases, can be useful and even vital to our ability to function. Imagine, for example, if every time you took a step you had to focus a tremendous cognitive effort on making your legs move in just the right way for smooth movement; in the same way that you focus on it when walking on an icy path. Would walking not be much harder? How much walking would you be able to do in a day without growing sick of it? Thank heavens that most of the time our subconscious worries about the exact mechanism of walking! It is our habits and impulses that allow us to get through the day without suffering mental exhaustion. 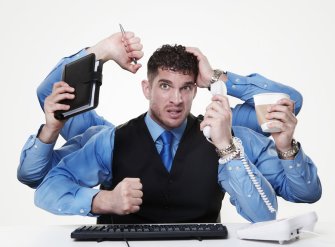 Think you could multitask if some of the simpler actions were not managed by your subconscious? Think again.

Our impulses also help us fully experience life around us. She refers to the story of a woman who set herself a simple list of goals for a week and was bound to follow them. The goals were simple, exercise more, get the right amount of sleep, and more goals of the kind we would all do better to aim for. She was able to achieve most of them rather easily. However, her diary is so dull it could cure insomnia. The utter rejection of impulse, even non-negative ones, suggests that her week was spent doing exactly what she should do and not much else. While this may be good for us, it is also not quite what most of us think of when we imagine the kind of life we would want to live.

Is Dr. Brown alone in her defense of our better impulses?

Dr. Brown has a friend in Aristotle of all people, who saw the ideal human as a rational creature. Aristotle understood the power of impulse, and that it makes habits notoriously hard to break. His ethical theories take this into account and try to have the virtuous person change not only their actions but their habits. When even your impulses have become virtuous, how can you not be so?

Tags
impulseimpulsivitymarshmallow testrationalrationality
In this article
impulseimpulsivitymarshmallow testrationalrationality
Related
The Present
How precision-loving economists make “rigor distortis” errors
Here’s the psychology that explains why many economists prefer to be narrowly right yet broadly wrong (they suffer from professional “rigor distortis”).
Neuropsych
How Thinking in a Foreign Language Reduces Superstitious Belief
A new study shows that “magical thinking” can be reduced by presenting and processing information in a second language.
Neuropsych
Bragging Rights: When Beating Your Own Drum Helps (Or Hurts)
Social observers are particularly attuned to braggadocio. What do you think of a person who claims to be a better driver, performer or lover than average? Is this person better […]
Thinking
Hope and despair exist on a spectrum — here’s how to move toward hope
Hope is not as soft or as passive an emotion as we think. Here’s how ‘The Shawshank Redemption’ can teach us the philosophy and function of hope as a response to possibility.
▸
6 min
—
with
Andrew Chignell
Smart Skills
Eric Weinstein: ‘Mental sandboxes’ can help humanity reach new heights
Your mind is built to process contradictory, irrational ideas. Use that to reach new intellectual heights.
▸
4 min
—
with
Eric Weinstein
Up Next
Health
Lifestyle Changes, Not a Magic Pill, Can Reverse Alzheimer’s
The prevalence of Alzheimer’s disease is expected to triple over the next three decades, to nearly 14 million in the United States alone.