The eyes may be the window to the soul, but the hands can tell you a lot about a person too. Whether they are calloused for instance, or cotton soft. The fingers in particular can give you further insights. A collaborative study conducted by Oxford and Northumbria researchers in the UK, found that differences in the lengths of certain fingers indicated whether a person tended to be more promiscuous or monogamous by nature. The secret lies with the ring finger in comparison to the index.

After studying 585 North American and British men and women, they found that those who had longer ring than pointer fingers, in either sex, tended to be more promiscuous. While those who had a longer pointer than ring fingers tended to be more monogamous. It’s important to note that the study suggests but doesn’t prove a biological basis for relationship pattern preferences.

A longer ring finger was associated with more testosterone exposure in the womb, the hormone responsible for the libido in both genders. Men and women have differing levels of each sex hormone. Levels vary greatly among both genders. Some men have high testosterone for instance, as do some women, some men low testosterone, and so on. 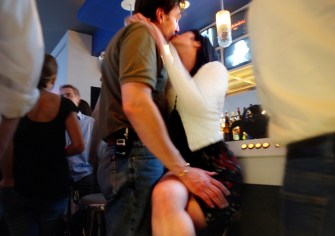 Longer ring fingers were associated with a tendency toward more promiscuous relationships in one study.

This agreeability wasn’t reserved for the women they were romantically involved with either, but occurred with female family members, coworkers, and friends, as well. These men, researchers assume, may be more willing to compromise, a trait necessary to healthy relationships. Debbie Moskowitz was the lead author in this study. A professor of psychology at the university, she said that men with a larger ring finger tended to have more solid relationships and were more likely to have children, due to their agreeable nature. 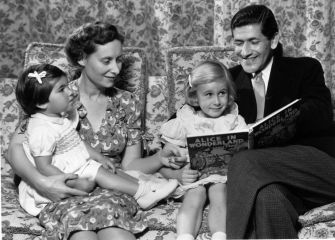 Men with a longer ring than index fingers may be more likely to have children.

In this latest study, neuroscientists at The Norwegian University of Science and Technology (NTNU), found that they could predict whether a person was a good athlete or if they were more of the anxious type, by examining index to ring finger ratios. Both men and women with longer ring fingers are better at spatial tasks, researchers determined. As such, they are better at physical jobs and athletics.

There are drawbacks however to those with a longer ring finger. For instance, they are at higher risk of ADHD, Tourette’s syndrome, and autism. These conditions are more prevalent in men. There are also advantages for those with a longer pointer finger. Low testosterone exposure in utero has been linked with better verbal memory. It was also associated with a higher risk of anxiety and depression, issues typically more prevalent in women.

NTNU doctoral student Carl Pintzka completed this latest study for his dissertation. He wanted to associate in utero testosterone exposure with a higher aptitude for physical tasks. He first recruited 42 female participants and measured the length of their index and ring fingers. Next, he gave half the group a drug which would drop their testosterone levels down. The other half received a placebo. Then he gave them various exercises to perform. 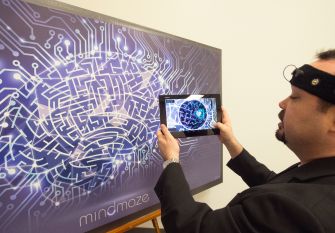 Women in this study were asked to maneuver around a virtual maze, to see if testosterone made them better at it.

By dampening testosterone, Pintzka could evaluate whether or not the hormone affected the women’s spacial capabilities. The volunteers had to complete a virtual maze, which included mentally rotating an array of 3D objects. Pintzka said, “The women who scored best on the mental rotation tasks had high levels of testosterone both prenatally and in their adult lives, while those who scored worst had low levels in both.”

Further research must be conducted to discover more about this phenomenon and how it may be applied to human health. One thing is for sure: how much testosterone we encounter in the womb and later on in life has a substantial impact on who we are. Pintzka suggests that a larger study would allow for a deeper understanding and a stronger correlation to surface. Until that time, when you take the hand of your loved one, take a look at their ring-to-index finger ratio. It may lend insight into who they really are.

To learn more about what your fingers say about you click here:

Tags
Debbie Moskowitzfingerfinger lengthhand sizein uteroindex fingerlibidomcgill universitymonogamyNorthumbriaOxford Universitypersonalitypromiscuousrelationshipring fingersmall digit ratiotestosterone
In this article
Debbie Moskowitzfingerfinger lengthhand sizein uteroindex fingerlibidomcgill universitymonogamyNorthumbriaOxford Universitypersonalitypromiscuousrelationshipring fingersmall digit ratiotestosterone
Related
Neuropsych
Research finds narcissists are not just self-absorbed, they’re also more likely to be aggressive
Participants with high levels of narcissism showed high levels of aggression, spreading gossip, bullying others, and more.
Neuropsych
Your voice might reveal personality traits
The way you speak might reveal a lot about you, such as your willingness to engage in casual sex.
Thinking
Benjamin Franklin on how to be a nice, likable person
Think of the nicest person you know. The person who would fit into any group configuration, who no one can dislike, or who makes a room warmer and happier just […]
The Present
Which COVID-19 personality are you?
New research identifies 16 different COVID-19 personality types and the lessons we can learn from this global pandemic.
Neuropsych
What is the ‘self’? The 3 layers of your identity.
Answering the question of who you are is not an easy task. Let’s unpack what culture, philosophy, and neuroscience have to say.
▸
12 min
—
with
Big Think
Up Next
Culture & Religion
How Do People Become Indoctrinated Into Cults?
If Will Allen’s documentary, Holy Hell, teaches us one thing, it’s that there’s no easy answer.