The function of sleep has been something of a mystery for a long time. Nearly every creature in the animal kingdom sleeps in one way or another, indicating that it’s a highly important function for survival, even if lying around and having anxiety-inducing dreams doesn’t really seem all that productive.

However, new research published in the journal Science may have just uncovered what’s really going on in our brains while we dream about being late for an exam because our teeth fell out. Our brains may actually be taking a bath in cerebrospinal fluid (CSF), a watery substance that washes out all the gunk that accumulates in our brains over the course of the day. 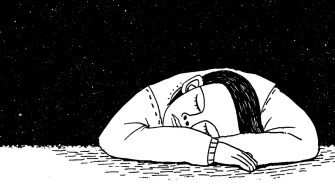 Neurons take up a lot of energy. In fact, the brain alone accounts for roughly 20 percent of the body’s total energy consumption. All of this activity and fuel-burning also means that the brain generates a lot of waste. Two varieties are particularly concerning: beta-amyloid peptides and tau proteins. Studies have shown that these waste products build up into clumps and entangled nets within the brains of Alzheimer’s patients, damaging the connections between neurons.

The brain produces a lot of waste over the course of a day, and yet we don’t see people getting tangles of tau proteins, deposits of beta-amyloids, and subsequent neurodegenerative diseases in their 30s. Part of the reason why is because when we sleep, our brain takes the trash out. Prior studies in mice have shown that the levels of neurotoxic waste products in the brain drop overnight. Now, this new study out of Boston University shows us how the brain gets clean. 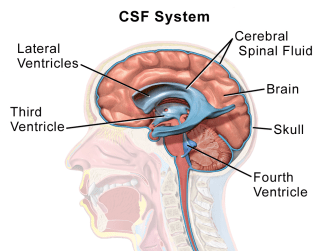 An image depicting cerebrospinal fluid and how it surrounds the brain.

Washing away the waste

Lead author Laura Lewis and colleagues wanted to get a comprehensive picture of how the brain was clearing these waste products out overnight, so they recruited several participants to wear EEG caps to measure neural activity while also instructing the participants to sleep within an MRI to measure CSF activity — which isn’t an easy task.

“We have so many people who are really excited to participate because they want to get paid to sleep,” said Lewis. “But it turns out that their job is actually — secretly — almost the hardest part of our study. We have all this fancy equipment and complicated technologies, and often a big problem is that people can’t fall asleep because they’re in a really loud metal tube, and it’s just a weird environment.”

Fortunately, the participants did manage to get to sleep, revealing a never-before seen phenomenon take place in our brains every night. During a phase of non-REM sleep called slow-wave sleep, Lewis and colleagues observed an ebb and flow of electrical activity and CSF levels.

“First you would see this electrical wave where all the neurons would go quiet,” said Lewis. A few seconds afterwards, Lewis and colleagues saw that “there are these really large, slow waves occurring maybe once every 20 seconds of CSF washing into the brain.”

These waves of CSF washed away all of the brain’s metabolic waste products that it accumulated over the course of the day. It seems like it’d be more efficient to have this rinse cycle going on all the time, but the researchers had a pretty good idea as to why it could only take place during deep sleep.

As the brain’s neurons go quiet after a slow wave, they require less oxygen. Since they require less oxygen, less blood flows to these regions of the brain. With less blood, there’s more space for CSF to rush in and scrub the brain of its waste products. “We’ve known for a while that there are these electrical waves of activity in the neurons,” said Lewis, “But before now, we didn’t realize that there are actually waves in the CSF, too.”

When we’re awake, our brains can’t afford to make these coordinated waves in neural activity — it’s too busy navigating traffic, reading a news article, or watching TV. Thus, our brains telling us that we feel tired is really their way of saying that they need to take a bath.

As we age, our brains tend to engage less often in slow-wave sleep, meaning junk has greater opportunity to pile up in the brain. Researchers believe that this build-up of junk is the cause of Alzheimer’s and other neurodegenerative diseases. As a result, much of the research on treating such diseases has focused on getting rid of the junk — like administering drugs that target beta-amyloids or tau proteins. Lewis’s research, however, points us in a new direction: Rather than try to get rid of the accumulating waste products in aging brains, maybe we should begin focusing our efforts on improving the brain’s failing clean-up cycle instead.

New memories appear to be stabilized in the brain by a neurotransmitter called gamma-aminobutyric acid (GABA).
Up Next
Career Development

Let curiosity lead you to the right questions with Tim Ferriss

During a 2005 commencement address at Stanford University, Steve Jobs related an anecdote about an experience he had shortly after dropping out of college that conveys one of the qualities […]