It’s not easy branching into different subjects today and mastering them. The sheer amount of knowledge and intellectual vocations floating around is enough to keep a million da Vinci’s busy for centuries. The amount of time and expertise many people dedicate to just one domain often leaves them bereft of any other subject mastery.

Yet, even today the staying power and mythologization of the polymath persists. There is good reason to believe that any scientific or civilization progress has been spurred and created off the backs of the multifaceted polymath. The alternative of hyper specialized disciplines has left us with siloed subfields and occluded knowledge which persists in some miasmic mix of cross-disciplinary stagnation and some kind of new scientific priest craft.

The prospects of learning how to think like a renaissance man pervade all levels of inquiry and culture. It’s not just our top scientists who could learn to branch into new disciplines, but regular curious everyday people can benefit too.

Praise for the specialist and disdain of the generalist

We often hear, somewhat disparagingly the phrase: “Jack of all trades, master of none.” This maxim seems to be a commonality across multiple languages and cultures. For example, the Chinese also warn: “Equipped with knives all over, yet none is sharp.”

Now when you think about it, this is some very misplaced common sense gone awry. Many of the most impactful individuals throughout human history have been men and women with an unbelievable amount of varied interests and talents. It is because of this very reason that they were so successful in whatever they did.

Writer Robert Twigger believes that this faulty way of thinking about specialization versus applied generalized mastery is due to a phenomenon in which he coined the word monopath. He states:

“We hear the descriptive words psychopath and sociopath all the time, but here’s a new one: monopath. It means a person with a narrow mind, a one-track brain, a bore, a super-specialist, an expert with no other interests — in other words, the role-model of choice in the Western world.”

He believes that this stems from an economic viewpoint of success. Just as it’s become more efficient to interact with creating things through cut-off specialized points of contact – à la the assembly line production method, we seemed to have done the same thing with our own personal interests and talents.

“The monopathic model derives some of its credibility from its success in business. In the late 18th century, Adam Smith (himself an early polymath who wrote not only on economics but also philosophy, astronomy, literature and law) noted that the division of labour was the engine of capitalism. His famous example was the way in which pin-making could be broken down into its component parts, greatly increasing the overall efficiency of the production process.”

Because of this economic value that specialization presents us with, we tend to abandon any other divergent passions that we might be interested in. On top of that, we are also under the false impression that any true learning stops once you reach a certain age.

Learning doesn’t stop once you get older

Many of us believe that our best learning years are behind us. Some of us might also feel like we missed the boat when it comes to natural talent. But all of these things are misrepresentations of how our mind and the acquisition of knowledge work.

While neurologically it’s true that it’s much easier to learn when we’re younger, there’s a part of our brain we have to exercise if we’re going to continually learn and grow.

“It appears that a great deal depends on the nucleus basalis, located in the basal forebrain. Among other things, this bit of the brain produces significant amounts of acetylcholine, a neurotransmitter that regulates the rate at which new connections are made between brain cells.

This in turn dictates how readily we form memories of various kinds, and how strongly we retain them. When the nucleus basalis is ‘switched on’, acetylcholine flows and new connections occur. When it is switched off, we make far fewer new connections”

The nucleus basalis is completely “active” between birth and the ages of ten or eleven. Afterwards, it seems that our brains become more selective about the knowledge we hold. But this neurochemical process doesn’t define us or what we can or cannot learn. It must be exercised if we’re to learn to think like a renaissance man.

Looking back at those wondrous higher types of antiquities and the Renaissance, we begin to see many trends. A polymath is someone who’s expertise flows like a flood, encompassing and saturating any field it comes across. 15th century polymath Leon Battista Alberti once wrote that a man can do anything that he wills. The ideal of perfection during the Renaissance was the master of all.

This great higher ideal of a human excelled in artistic, intellectual and even physical activities. Nothing was out of bounds for them. While all of this might conjure up imagery of the greats like Michelangelo, Goethe, or some other Faustian archetype… the polymath is something we can all subscribe to in some fashion. Polymaths in a way embody the childish curiosity made manifest into experience and doing.

“A human being should be able to change a diaper, plan an invasion, butcher a hog, conn a ship, design a building, write a sonnet, balance accounts, build a wall, set a bone, comfort the dying, take orders, give orders, cooperate, act alone, solve equations, analyze a new problem, pitch manure, program a computer, cook a tasty meal, fight efficiently, die gallantly.
Specialization is for insects.” 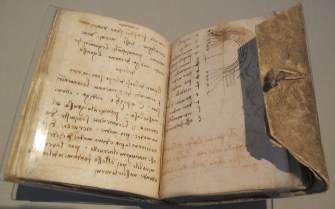 Contemplation leads to self-actualization once you set out to do something. The reason that someone like Leonardo was able to accomplish and do some much, is because he wasn’t just content to question and learn about something then forget about it. He set himself into action and practice for everything that interested himself.

From great paintings, anatomical research, futuristic inventions and so on – Leonardo is a great guide for engaging in multiple fields and excelling in them.

Here are some general lessons that we can learn from da Vinci and other great thinkers.

Overall, there is plenty of proof that multidisciplinary polymathy is a benefit to learning, self expression and scientific progress. There was a study at the University of Pennsylvania School of Medicine, which found that medical students were able to increase their observational recognition skills after taking an art class.

Whisking yourself away into the ancient halls of unbounded inquiry will not hinder your goals in life, they will instead facilitate you to new heights of greatness.

In hell, we assume a position of moral superiority, looking down over the sinners and the poor decisions that led them to this wretched place. In heaven, Dante is looking down upon us.
Neuropsych

Our minds are hyper-taxed due to hyper-tasking. We need to slow down and allow ourselves to daydream if we want to improve our attention.
High Culture

Portraiture is one of the most intimate genres in all of painting, and it has reinvented itself many times across European history.
High Culture

Being fit boosts your tolerance for cold weather

Yet another reason to keep exercising.