For many animals, a direct gaze into their eyes constitutes a challenge. Gaze into the eyes of a dog you don’t know well and you’ll be picking a fight, and a cat on edge will keep their eyes laser-locked on a perceived threat.

As cat aficionados have long suspected, you can break the ice with a cat who’s sussing you out by slowly blinking your eyes once to communicate that you’re letting your guard down. Seeing that you’re not in attack mode, the cat will usually return the gesture and relax. Call it the “slow blink.” Others consider it a “cat smile” for the facially inscrutable beings.

Now scientists from the University of Sussex and University of Portsmouth in the U.K. confirm the magic effect of the slow blink in a study published in Scientific Reports called “The role of cat eye narrowing movements in cat–human communication.”

“It’s something that many cat owners had already suspected, so it’s exciting to have found evidence for it,” says senior author Karen McComb.

“It’s definitely not easy to study natural cat behavior,” says co-author Leanne Proops, adding that “these results provide a rare insight in to the world of cat-human communication.”

The study cites three things about cats that other research had already discovered: 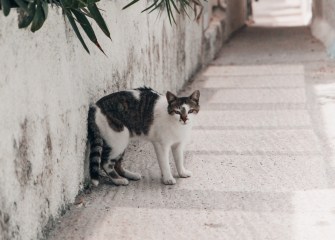 “This study is the first to experimentally investigate the role of slow blinking in cat–human communication,” McComb says. “And it is something you can try yourself with your own cat at home, or with cats you meet in the street. It’s a great way of enhancing the bond you have with cats. Try narrowing your eyes at them as you would in a relaxed smile, followed by closing your eyes for a couple of seconds. You’ll find they respond in the same way themselves and you can start a sort of conversation.”

The study’s authors were able to draw two conclusions from a pair of experiments video-recorded for the study:

In the first experiment, the researchers observed the behavior of 21 cats in their homes, with 14 households represented overall. The cats ranged from .45 years to 16 years in age, and 11 of the cats were female. Their owners were given slow-blink instructions, and each cat was allowed to find a comfortable spot, at which time slow-blinks were exchanged as the owner sat a meter away from their fellow blinkee.

In the second experiment there were 24 cats: 12 female and 12 male. Aged from 1–17 years old, the cats all came from different homes. An experimenter, a stranger to each cat, adopted either a neutral expression or attempted to engage a cat in a slow blink. When the experimenter extended a welcoming hand, palm upward, to a cat while crouching directly across from it, those cats who’d shared a slow blink more often accepted the overture and approached the experimenter.

“As someone who has both studied animal behavior and is a cat owner,” says McComb, “it’s great to be able to show that cats and humans can communicate in this way.”

While recognizing it’s plausible that “slow blinking in cats began as a way to interrupt an unbroken stare, which is potentially threatening in social interaction,” the study’s first author Tasmin Humphrey suggests another possibility, saying “it could be argued that cats developed the slow blink behaviors because humans perceived slow blinking as positive. Cats may have learned that humans reward them for responding to slow blinking.”

Humphrey notes that, “Understanding positive ways in which cats and humans interact can enhance public understanding of cats, improve feline welfare, and tell us more about the socio-cognitive abilities of this under-studied species.”

Certainly, being able to calm and make connections with a cat allows a human to more readily assess their well-being in places such as a veterinary office or animal shelter.

No oxygen? No problem.
Neuropsych

Missing link? More like the weakest link.
Up Next
Starts With A Bang

Is America Finally Ready To Become A Scientific Nation?

The International Space Station has provided humanity with not only a laboratory to conduct experiments in zero gravity, but to better understand how humans can survive, thrive, and work in […]