It’s two in the morning, but you still haven’t slept — you’ve shifted from one side to the other, stuck in a stupor that’s not quite sleep but not quite wakefulness, ruminating about your job interview the next day. Or that big essay that’s due. Or nothing at all. No matter what the cause is, you just can’t seem to get to sleep, and it’s driving you nuts.

We’ve all been there, but for the most part, these events only happen occasionally. An unlucky subsection of the population, however, have anxiety disorders such as PTSD, generalized anxiety disorder, or social anxiety disorders. These diagnoses are well-known to be associated with chronically poorer sleep. Now, a new study published in Nature Human Behavior on November 4, clarifies the intimate link between sleep deprivation and anxiety.

Even in healthy individuals, researchers discovered that a single night of disturbed sleep was associated with a 30 percent spike in anxiety levels during the next day. But on the bright side, a night of good sleep can help protect against anxiety. 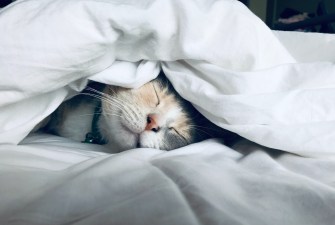 The researchers found that one particular stage of sleep — so-called slow-wave sleep — was responsible for increasing or reducing next-day anxiety.

“Our study strongly suggests that insufficient sleep amplifies levels of anxiety and, conversely, that deep sleep helps reduce such stress,” said study lead author Eti Ben Simon in a statement. Specifically, Simon and colleagues investigated the effects of non-rapid eye movement (NREM) sleep on anxiety. As opposed to REM sleep, little dreaming takes place during NREM. Instead, the brain seems to do a considerable amount of house-cleaning during this period of sleep through activities such as consolidating memories and washing out waste byproducts.

Simon and colleagues were particularly interested in NREM’s slow-wave sleep stage, the deepest phase of sleep. The researchers recruited a number of participants and split them up into two groups: one got a full night’s sleep, and the other stayed awake all night in the lab playing board games, watching movies, using the internet, and doing other activities to kill the time.

Both before and after their night’s (un)rest, the participants rated their anxiety levels using a questionnaire. In the mornings, they were also shown short video clips depicting a mixture of neutral and distressing videos while the researchers measured their brain activity in an fMRI.

The difference between the two groups was stark. Compared to their anxiety scores prior to sleep deprivation, the sleepless group rated 30 percent higher for anxiety, with a full 50 percent scoring high enough to qualify for clinical anxiety symptoms.

The driving mechanism behind this result was easy to see through the fMRI. “Without sleep,” said senior author Dr. Matthew Walker, “it’s almost as if the brain is too heavy on the emotional accelerator pedal, without enough brake.” In the brain, the medial prefrontal cortex acts as a brake, keeping our emotional responses in check. The sleep-deprived group had far less activity in this region compared to the well-rested group. As for the acceleration, sleep-deprived participants also had much higher activity in the deeper, emotional centers of the brain such as the amygdala and the dorsal anterior cingulate, areas that are known to be altered in clinical anxiety disorders.

Interestingly, variations in the anxiety levels of the well-rested group appeared to correlate with the amount of slow-wave sleep that the participants experienced the night before. This period of sleep appears to regulate these brain regions, ensuring that they operate in a balanced way.

“People with anxiety disorders routinely report having disturbed sleep, but rarely is sleep improvement considered as a clinical recommendation for lowering anxiety,” Simon said. “Our study not only establishes a causal connection between sleep and anxiety, but it identifies the kind of deep NREM sleep we need to calm the overanxious brain.”

While the study examined people who got no sleep whatsoever, poor sleep also seems to have similar anxiety-inducing effects. The researchers additionally tracked 280 other individuals, asking them to rate the quality of their sleep the night before and their level of anxiety the next day. Over the course of four days, participants consistently reported higher anxiety after a night of poor sleep, reporting that even minor changes affected their anxiety levels.

Walker argued that these results paint a bad picture for our chronically sleep-deprived society. “The findings suggest that the decimation of sleep throughout most industrialized nations and the marked escalation in anxiety disorders in these same countries is perhaps not coincidental, but causally related,” he said. “The best bridge between despair and hope is a good night of sleep.”

Are you in love? Trust your mother over your brain.
▸
with
Big Think
Thinking

Stoicism says that we should change what we can, endure what we must. The company we keep is something we can, and often should, change.
Up Next
The Present

The semiautonomous could help to protect officers, but some are concerned about how exactly police plan to use it.