The question of meaning remains one of life’s greatest inquiries. Is religion necessary for deriving meaning? Can a modern, secular Buddhist approach work better, in which meaning is derived in moment-by-moment perception instead of reserving faith for a revelation at some future point?

These questions won’t be answered here, though new research from Brazilian researchers has found that religion alleviates depressive symptoms in believers. Published in the journal Trends in Psychology, the researchers asked 279 volunteers (72 percent female) to respond to an online questionnaire that focused on intrinsic religiosity, meaning in life, and levels of anxiety and depression.

The team concludes, “intrinsic religiosity has a protective effect against depression symptoms; however, it occurs indirectly, via meaning in life.”

The authors note that 4.4 percent of the global population suffers from depression, with women 1.5 to 3 times more likely to experience depressive symptoms. Religion, it appears, provides a bedrock for communing with the sacred. They define religion as the general “beliefs, practices, and rituals related to the sacred and vary according to each religious tradition.” Intrinsic religiosity, the focus of this research, skews toward individual relationships with the sacred, not utilitarian values—the extrinsic dimension.

The question of meaning in life and religion has been a hot topic of late. Leigh Stein recently pinpointed the emerging trend of influencers being treated as moral authorities, to which she pointed to decreasing faith as a potential reason: void of traditional religion, people are searching for meaning in digital spaces.

She writes that 22% of millennials now identify as “nones.” The broader religious landscape in America has shifted dramatically in the last generation. According to a 2019 Pew poll, American adults claiming Christianity dropped 12 points in the last decade. Overall, 26% of adults identify as “none.”

“None” is an umbrella term signifying an atheist, agnostic, or someone not interested in anything in particular. Sometimes this includes dabblers who pull from a variety of traditions without feeling invested in one. Stein noticed that wellness influencers have rushed in to fill a void, intentionally or not. As she writes,

“I was once one of those millennials who made politics her religion; I lasted three years as a feminist activist and organizer before I burned out in 2017. That’s when I began noticing how many wellness products and programs were marketed to women in pain, and how the social media industry relies on keeping us outraged and engaged. It’s no wonder we’re seeking relief.”

Shadi Hamid occupies a similar place, though he identifies tribal political affiliations as the replacement for religion—specifically, to replace meaning. He claims a quarter of American adults qualify as “none,” noting that less than half are traditionally religious, i.e. Christan church attendees, based on a 2019 Gallup poll. Hamid argues that this pivot occurred when religion left our lives.

“As Christianity’s hold, in particular, has weakened, ideological intensity and fragmentation have risen. American faith, it turns out, is as fervent as ever; it’s just that what was once religious belief has now been channeled into political belief. Political debates over what America is supposed to mean have taken on the character of theological disputations. This is what religion without religion looks like.” 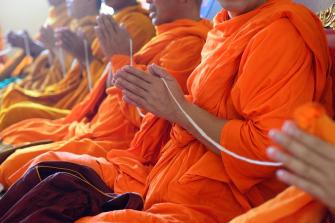 Hamid believes the Left and Right channel their political-religious hybrids differently: the woke Left repurpose original sin, atonement, ritual, and excommunication as pathways to creating a more just society while the Right has stripped much of the religion from their religion in order to focus their existential angst into blood and soil themes. QAnon, for example, is essentially a religious doctrine, requiring of its devotees the same leaps of faith.

Stein looks at the politicization of religion—really, the religiosity of politics—as a failure of imagination. Why, she wonders, have people put their faith in memoir-selling, supplement-slinging influencers instead of people who have actually accomplished something in their lives other than turnkey marketing campaigns? Why would we turn to so-called leaders incapable of even attempting to answer life’s big questions, or at the very least offer solace in the face of uncertainty, the classical role of religious leaders?

“There is a chasm between the vast scope of our needs and what influencers can provide. We’re looking for guidance in the wrong places. Instead of helping us to engage with our most important questions, our screens might be distracting us from them. Maybe we actually need to go to something like church?”

The research team in Brazil might agree. One defining symptom of depression is an inability to foresee a better future. The global number might be 4.4 percent, but in America, the number is closer to 8 percent. America, now considered the twelfth wealthiest country in the world, ranked third in terms of depression. Money is never going to buy happiness.

Will religion? While the track record is spotty, this new research entertains an intrinsic sense of belief in the sacredness of life as a natural antidepressant, as Robert Sapolsky phrased it. During a time of growing unease, the suspension of disbelief might be what the doctor ordered—for some at least.

Tags
anxietydepressionfaithmental healthpsychologyreligionthinking
In this article
anxietydepressionfaithmental healthpsychologyreligionthinking
Related
Sponsored
What childhood “money story” is shaping your financial behaviors?
Here are the signs that you inherited “money anxiety” from your parents.
Neuropsych
The most common source of awe might surprise you
It’s us.
How to fix your money trauma
Do you remember feeling “money shame” for the first time?
▸
7 min
—
with
Dr. Brad Klontz
Neuropsych
Psychology studies that go viral are likelier to be bogus
A new 20-year analysis of over 14,000 psychology studies finds that a study’s media coverage is negatively linked to its replicability.
The Learning Curve
Why do high IQ people stagnate in their careers? Emotional intelligence
Research suggests that emotional intelligence is more vital for success than IQ.
Up Next
Thinking
Legal standards invoke the ‘reasonable person’. Who is it?
The ‘reasonable person’ represents someone who is both common and good.