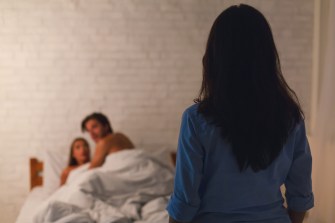 What personality traits make a person more (or less) likely to cheat on a spouse?

Photo by Prostock-studio on Shutterstock

Defining the human psyche and explaining human behaviors has been a goal of psychologists and researchers for decades.

In the 1970s, we were presented with the model we know today as the Big Five. The Big Five was created by two independent research teams who took different approached to their studies of human behavior and arrived at the exact same result.

In 1998, Oliver John of Berkeley Personality Lab and Veronica Benet-Martinez of UC, Davis created what is known as the “Big Five Inventory” – a 44 item questionnaire that measures a person based on the Big Five factors and then divides those factors into personality facets.

These factors are measured on a spectrum – a person may be highly extroverted or highly introverted, or somewhere in between. You can see a copy of the Big Five Inventory here.

How does our personality affect our likelihood of cheating in a relationship?

In 2005, researchers Tricia Orzeck and Esther Lung conducted a study where participants voluntarily answered a questionnaire on personality traits about themselves and their monogamous partners. A total of 45 males and 59 females rated themselves and their partners (with a total of 208 people being involved in the study).

The results of this study proved that there is a significant difference between cheaters and non-cheaters when it comes to the Big Five model of personality traits.

This was further explained by a study in 2018, where data from two separate studies looked at the personality traits and relationship dynamics of new married couples. Both studies lasted 3 years in length and examined the associations between personality and infidelity.

Results of this study showed these were the couples who were most likely to experience infidelity in their marriage:

The results of this study suggest that one person’s personality traits aren’t enough to determine their likelihood of infidelity. Instead, infidelity requires an in-depth look at both the personality traits in each person in the relationship as well as the dynamic between them.

Why do we cheat?

According to a 2013 poll of 1535 American adults, having an affair is considered “more morally wrong” than gambling, human cloning, and medical testing on animals. And yet – so many people still experience heartbreak from infidelity in their relationships.

“Why do people do this? Why do people who have often been faithful for decades one day cross a line they never thought they would cross? What’s at stake? How do we make sense of this and how do we grow from that?”

In her book “The State of Affairs: Rethinking Infidelity”, Perel, who has worked with couples for 33 years, takes a look at infidelity not in an evidence-based scientific way, but from a sociological, anthropological angle.

This is human nature, to be curious – but what makes a person go from naturally curious to morally ambiguous and cross the line to infidelity? While personality traits and the dynamic of your relationship play key roles, there is a lot of speculation on why people cheat.

Is technology to blame for “making cheating easier”?

Many people speculate that the surge in technology (dating apps and websites such as Ashley Madison, which targets married couples) may be one of the biggest reasons infidelity happens.

However, according to research conducted by Dr. Justin Lehmiller in 2015, the prevalence of cheating isn’t any higher today than it was 20 years ago before the introduction of dating websites and apps.

Instead, psychologists have narrowed down some of the most common reasons people give for cheating on their spouses, which include:

These motives vary from how you view yourself to how you view your relationship and the context of the situation at hand. When it comes to putting a label on infidelity, there is very rarely just one factor involved. It’s never just about a person’s personality traits, or the dynamic in the relationship – it’s a combination of personality, events, and circumstance.

Tags
communicationcuriousitylovemarriagepersonalityrelationshipsSextrustvulnerability
In this article
communicationcuriousitylovemarriagepersonalityrelationshipsSextrustvulnerability
Related
The Well
How to articulate your thoughts effectively
Make it simple. Make it clear. Make it stick. Alan Alda on how to get everyone to understand your thoughts.
▸
5 min
—
with
Alan Alda
Life
How artificial intelligence is helping us decode animal languages
Communication among cetaceans, like whales and dolphins, looks especially promising.
Neuropsych
About 1 in 100 people stutter. What causes it?
The majority of children who stutter will spontaneously recover from it without intervention, but some 20% of people do not.
Neuropsych
How do lie detectors work?
Experts explain how lie detectors work, what happens in the brain when we tell lies and how accurate polygraph tests are.
The Present
The real reasons we turn on “airplane mode” when we fly
Shouldn’t “flight mode” be obsolete?
Up Next
Health
4 highlights from Stanford’s Human Behavioral Biology course, available online for free
From understanding human aggression to epigenetics, Stanford University offers all 25 lessons of this fascinating course for free on YouTube.