The usual antidepressants don’t work for everyone. That’s what makes a new study of the antidepressant properties of nitrous oxide so intriguing. It looks like just a single low dose of what your dentist may call “laughing gas” can help alleviate symptoms of depression for weeks afterward.

The study, from researchers at University of Chicago and Washington University-St. Louis, is published in the journalScience Translational Medicine.

According to the senior author of the study, Charles Conway, “A significant percentage — we think around 15 percent — of people who suffer from depression don’t respond to standard antidepressant treatment.”

“These ‘treatment-resistant depression’ patients,” Conway says, “often suffer for years, even decades, with life-debilitating depression. We don’t really know why standard treatments don’t work for them, though we suspect that they may have different brain network disruptions than non-resistant depressed patients. Identifying novel treatments, such as nitrous oxide, that target alternative pathways is critical to treating these individuals.”

“There is a huge unmet need,” says lead author Peter Nagele. “There are millions of depressed patients who don’t have good treatment options, especially those who are dealing with suicidality.”

If ketamine can help, can nitrous oxide?

The researchers wondered if some of the anti-depression properties seen in ketamine might also apply to nitrous oxide. Nagele explains, “Like nitrous oxide, ketamine is an anesthetic, and there has been promising work using ketamine at a sub-anesthetic dose for treating depression.”

The researchers conducted a one-hour session — they describe it as a “proof-of-principle” trial — in which 20 individuals with depression were administered an air mixture with 50 percent nitrous oxide. Twenty-four hours later, the researchers found a significant reduction in the participants’ symptoms of depression versus a control group.

However, the individuals also suffered the unpleasant side effects that laughing gas often causes in dental patients: headache, nausea, and vomiting. 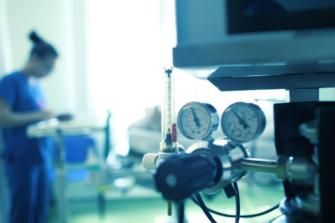 “We wondered if our past concentration of 50 percent had been too high,” recalls Nagele. “Maybe by lowering the dose, we could find the ‘Goldilocks spot’ that would maximize clinical benefit and minimize negative side effects.”

In a new trial, 20 people with depression were given a lighter nitrous oxide mix, just 25 percent, and the individuals tested reported a 75 percent reduction in side effects compared to the a control group given an air/oxygen placebo. This time, the researchers also tracked the effect of nitrous oxide on symptoms of depression for a far longer period, two weeks instead of just 24 hours.

“The reduction in side effects was unexpected and quite drastic,” reports Nagele, “but even more excitingly, the effects after a single administration lasted for a whole two weeks. This has never been shown before. It’s a very cool finding.”

Nagele also notes that, despite its popular renown as laughing gas, even a light 25 percent mix of nitrous actually causes people to nod off. “They’re not getting high or euphoric; they get sedated.”

Delivering help to people with depression

Nagele cautions, “These have just been pilot studies. But we need acceptance by the larger medical community for this to become a treatment that’s actually available to patients in the real world. Most psychiatrists are not familiar with nitrous oxide or how to administer it, so we’ll have to show the community how to deliver this treatment safely and effectively. I think there will be a lot of interest in getting this into clinical practice.”

After all, Nagele adds, “If we develop effective, rapid treatments that can really help someone navigate their suicidal thinking and come out on the other side — that’s a very gratifying line of research.”

Tags
chemistrydepressionhealth careketaminelaughing gasmedical researchmedicinemental healthpsychology
In this article
chemistrydepressionhealth careketaminelaughing gasmedical researchmedicinemental healthpsychology
Related
Neuropsych
Asthma drug brings back “lost” memories
In a study involving mice, scientists used two different techniques — one optogenetic and one pharmacologic — to recover “lost” memories.
Stoicism: How to turn your sadness into strength
Chloé Valdary shares the ancient Stoic principle that can defeat modern despair.
▸
7 min
—
with
Chloé Valdary
Life
Our antidepressant drugs are affecting animals and ecosystems
A toxicologist explains the impacts of antidepressants on fish — and no, they’re not getting any happier.
Sponsored
Want to boost your happiness? Buy experiences, not material possessions
Some experiences continue to pay dividends time and time again.
If money doesn’t buy happiness, you’re spending it wrong
These money experts say you can buy happiness. There are some red flags to look out for, though.
▸
7 min
—
with
Lindsay Bryan-Podvin
Up Next
The Future
Heliogen: concentrated solar power plant produces temperatures of 2700° F
How one startup plans to use “death rays” for good instead of evil.