In the early 19th century, Napoléon Bonaparte was perhaps best known for leading successful military campaigns and serving as the Emperor of the French for nearly a decade. But today, the ruthless French leader is probably best remembered in the popular imagination for his short height, a trait that inspired what many now call the Napoleon complex.

The Napoleon complex is a popular belief that describes an inferiority complex in which short men tend to compensate for their small stature through behavior, such as increased aggression or gossiping. From an evolutionary perspective, it makes sense that short men might try to compensate; research shows that tall men are more likely to hold positions of power, attract mates and be perceived as higher status by their peers.

A new study published in the journal Psychological Science uses economic games to examine the Napoleon complex, providing some of the first results on the importance of height in competition between men.

In an economic experiment called the dictator game, participants were asked to divide a sum of money between themselves and an unseen opponent. Each participant could divvy up the money however he wished. Interestingly, the participants who tended to keep the most money for themselves in this version of the game weren’t necessarily shorter—they were people who reported that they often felt small. 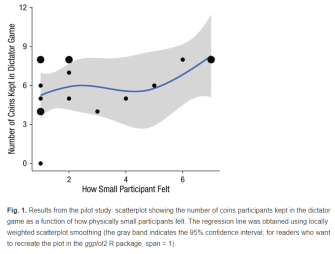 The researchers then conducted the same game in a competitive setting, in which two male opponents met face to face, had their heights recorded and read aloud (along with other physical and strength measurements), and were asked to enter separate cubicles. Again, the participants had to divide a sum of money. The allocator could choose to give any amount, or nothing, to his opponent, who was the receiver. The researchers told the participants that one person would play the allocator and the other would play the receiver, but in reality every participant played the allocator.

The results showed that, on average, relatively shorter men kept more money for themselves.

Next, the participants played an ultimatum game in which an allocator divides a sum of money, keeping some of it and offering a portion of his choice to the receiver. But if the receiver perceives the offer to be unfair, he can reject it and both parties get nothing.

Unlike the dictator game, height didn’t seem to play a significant role in influencing how much money participants chose to keep in the ultimatum game.

In another experiment, two male opponents once again played a dictator game. This time, however, each participant also had to choose an amount of hot sauce their opponent would have to consume, which was, in theory, a measure of aggression. But the results showed that shorter men were not significantly more likely to make their opponents eat more hot sauce.

The study suggests that shorter men are more likely to show indirect, rather than direct, aggression toward taller men in competitions for resources. For shorter men, the researchers wrote that these indirect strategies represent safer options than physical combat. Also, the results suggest that the Napoleon complex is most likely to manifest in situations where the shorter man has all the power, and the taller man can’t retaliate.

“The results imply that participant height is most important in predicting competitive behaviors in an absolute-power situation (the dictator game), regardless of opponent height,” the researchers wrote. “This is not surprising as shorter and taller men likely have different life experiences that may influence their decision making in behavioral experiments.”

It’s not just competitions between men that bring out the Napoleon complex, the researchers noted.

“In terms of underlying mechanisms, the Napoleon complex may also be shaped by intersexual selection forces—shorter men could use behavioral strategies to impress females, such as risk taking, generosity, or showing commitment (e.g., Griskevicius et al., 2007; Iredale, Van Vugt, & Dunbar, 2008).”

The researchers suggested it’d be interesting to see whether men would behave differently in these kinds of economic games if an attractive female were also involved.

“For further studies, it would be of great interest to add a potential mating opportunity to the paradigm to see how intersexual competition affects the Napoleon complex. The presence of an attractive female could exacerbate other kinds of overcompensating behaviors in short men—for example, an increased propensity toward risk taking to impress women.”

Does memory start to work only at a certain age?
Up Next
Neuropsych

Some perfectly healthy people can’t remember their own lives

Three study participants described their own memories as almost completely lacking a first-person perspective or involving any sense of “re-experiencing.”