“Music is a universal language, but we don’t always pay enough attention to what it’s saying and how it’s being understood,” says neuroscience doctoral student Alan Cowen of UC Berkeley and the lead author of a new study aimed at identifying the feelings music conveys. He and senior author psychologist Dacher Keltner, also of UC Berkeley, surveyed thousands of American and Chinese listeners to derive a list of 13 of music’s emotional languages, along with the types of music that evoke them. Their research has just been published in the journal Proceedings of the National Academy of Sciences, and you can experience the 13 emotions with this incredible interactive listening map. 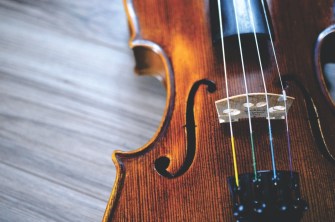 The purpose of the study

In online music streaming services, a variety of methods go into the creation of playlists designed to inspire specific moods and support various activities. Human curation — and instinct — is used in some cases, while in others, algorithms based on machine learning and AI determine the songs to be included.

The power of music in evoking subjective experiences is unquestionably remarkable, but little is known about how it does what it can do. As the study puts it:

“What is not well understood is how music evokes feelings in listeners. What is the taxonomic structure of the subjective experiences that music evokes? How do people represent their experiences when hearing music? To what extent are these processes consistent or variable across cultural groups?”

What Cowen and Keltner have attempted to construct is a definitive glossary for the emotional language of music, demystifying the magic employed by both human and artificial deejays. Their hope is that their findings “can inform inquiries ranging from the etiology of affective disorders to the neurological basis of emotion.”

Tap or click these images of the American and Chinese participants’ results to interact with the researchers’ combined map, which will open in a new tab in your browser.

The study’s method and results

The researchers utilized Amazon’s Mechanical Turk platform to survey over 2,500 people living in the U.S. and in China as exemplars of listeners from two very different cultures. The respondents were presented, in two separate studies, with 2,168 music clips derived from YouTube videos.

Subjects were tasked with identifying the feeling prompted by each sample, the strength of its emotional impact — described as a level of “arousal” — and whether the feeling was positive or negative. “Imagine organizing a massively eclectic music library by emotion and capturing the combination of feelings associated with each track. That’s essentially what our study has done,” summarizes Cowen.

Though musical examples were drawn from an array of regions and musical styles — thus theoretically reducing the associative impact of cultural or geographic context — patterns emerged when the subjects’ responses were subjected to statistical analysis, revealing the 13 categories of emotion music was capable of generating:

As part of their research, the authors have created an interactive map of the emotions they pinpointed, with each feeling denoted by the letter assigned to it in the list above. In the map, you can tap or click anywhere in the map to hear a representative music sample. This being YouTube, you’ll also see the video from which it comes, as well as an opening ad or two — the respondents were not subjected to these distractions.

Some universally got “feels”

None of this is especially surprising, but the question remains, how is music doing this? Considering the value of music in psychological, psychiatric, and physical therapy — not to mention the ongoing exploration into the workings of the brain — we want to know the answer, and this study may provide a helpful starting point for subsequent investigations.

Tags
artemotionsentertainmentlanguagemusicneurosciencepsychology
In this article
artemotionsentertainmentlanguagemusicneurosciencepsychology
Related
The neuroscience of loving music
Humans are musical animals four million years in the making, explained by music expert Michael Spitzer.
▸
8 min
—
with
Michael Spitzer
Neuropsych
How you breathe affects your brain
Your breathing rhythm influences a wide range of behaviors, cognition, and emotion.
Health
What happens when regular porn watchers abstain for a week?
Researchers watched for signs of withdrawal — but didn’t find any.
Neuropsych
Daily caffeine intake temporarily alters your brain structure
Compared to people who took a placebo, the brains of those who took caffeine pills had a temporarily smaller gray matter volume.
Thinking
Why you should laugh at yourself, according to Seneca and Nietzsche
“It is more human to laugh at life than to lament it.”
Up Next
Starts With A Bang
No, We Still Can’t Use Quantum Entanglement To Communicate Faster Than Light
It’s a pipe dream that violates the laws of physics, and not even quantum mechanics can give us a way out.One of the most fundamental rules of physics, undisputed since Einstein […]