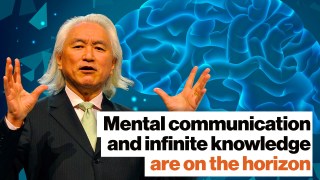 Michio Kaku: Mental communication and infinite knowledge are on the horizon

Soon we'll be able to blink and instantly go online via computer chips attached to our eyes.
▸
3 min
—
with
Michio Kaku

MICHIO KAKU: Eventually, a computer chip will cost a penny, which is the cost of scrap paper. They'll be everywhere and nowhere, including your eyeball, in your contact lens. You'll blink, and you'll be online. And who are the first people to buy internet contact lenses? College students, taking final examinations. They will blink and see all the answers to my exam right there in their contact lens.

And this can be very useful, if you're at a cocktail party, and there's some very important people there that could influence your future. But you don't know who they are. In the future, you'll know exactly who to suck up to at any cocktail party. On a blind date, they could be great. Because, of course, your blind date could say that he's single, he's rich, and he's successful. But your contact lens says that he pays child support, that he's three times divorced, and the guy is a total loser.

So yes, we're going to have almost infinite knowledge. And then beyond that, we will communicate mentally. That is, we'll be able to think about emails, think about images, memories, and send them on the internet. Already, we can record memories. This was done two years ago at Wake Forest University and also in Los Angeles. We've been able to record small memory, short memories, in mice. Now it's being done on monkeys. Next, Alzheimer's patients, they'll push a button, and memories will come flooding into their hippocampus. And maybe one day, you'll push a button and have that vacation that you've never had.

Because remember the talkies? When the talkies came, the silent movies went out of business. No one wanted to see Charlie Chaplin when you could hear actors talk. So movies are nothing but sound and a screen. Think of what will happen when you can feel emotions, sensations, feel what the actor is feeling. Then the movies will seem so barbaric. They'll seem such like a dinosaur technology, once we have brain net capable of sending emotions, feelings, on the internet.

How to boost your career in a ruthless job market