Recently, an Equinox member tried to walk out of the club carrying a stack of towels. When management stopped him, he thought they were offering to help carry the towels to his car. He was baffled upon learning that you’re not actually allowed to steal club property. He had assumed, as a paying client, they were rightfully his.

In some ways this is an upgrade from how many members treat towels. I’m always amazed by how many men leave them strewn across the floor and benches even though they have to, by design, walk by a bin on the way out of the locker room. Not just towels: shaving cream and hair in sinks; treating benches like drying racks for sweaty clothing; hangars and plastic and energy drink containers and…

I feel like I’m in nursery school again, only back then my peers generally had better manners. While I can’t speak for the women’s changing room, I’ve been told it’s not much better.

I was introduced to Jordan Peterson’s work thanks to his “Clean Up Your Room” tangent on the Joe Rogan podcast. Rather than offense—the most common response when pointing out men can’t clean up after themselves—this rant was a breath of fresh air.

The context is different, though the general idea remains intact. The idea stems from a lecture on millennials trying to change economic systems—a talk, he admits, that’s a “bit pretentious.” The Canadian professor believes that 18-year-olds cannot possibly know anything about economic structures. Beyond the specifics of his argument, generality is summated in one sentence:

“If you can’t even clean up your own room, who the hell are you to give advice to the world?”

Fleshing out the idea, he continues:

“My sense is that if you want to change the world, you start with yourself and work outward because you build your competence that way. I don’t know how you can go out and protest the structure of the entire economic system if you can’t keep your room organized.”

Jordan Peterson on Cleaning Your Room – The Joe Rogan Experience

Jordan Peterson on Cleaning Your Room – The Joe Rogan Experience

Peterson suggests displaying your own competence locally, managing what you can actually control, before championing larger causes predominantly out of reach. It’s humbling, he continues, because you’re not “exceeding your domain of competence.”

Self-competence is a foundational theory in his last book, 12 Rules For Life. For example, Rule #2: Treat yourself like someone you are responsible for helping, another way of expressing the biblical maxim about doing unto others and so on. Not taking care of yourself “with attention and skill,” he writes, paves the road to “self-disgust, self-contempt, shame, and self-consciousness.”

A whole lot of selves, which is part of the problem. The intensive focus on the individual is a motivating factor behind the rise in populism: pockets of communities, and pockets within pockets, disenfranchised and disempowered, refusing reason to scream “what about me.” Community building and participation are powerful methods for alleviating the anxiety and depression that become emotionally taxing when you feel isolated. Problem is, our mediums for expression, namely social media, merely echo. Cleaning up your Twitter feed might be another necessary step in this process.

Just as carelessness online is common, a similar scenario unfolds walking through a gym locker room. Consumed as we are by the device in our hands, we lose spatial awareness. Someone else will clean up that towel or wipe away the shaving cream (or pick up those fingernail clippings—yeah, that too). How many times has someone almost (or fully) walked into you because their attention was consumed? How many times have you walked into someone?

When you can’t orient yourself spatially your ignorance of others is guaranteed. One basic example I can’t even believe I have to write, but having lived through it dozens of times, is worth a mention.

There are no shoes in yoga studios. A number of members wear flip-flops around the gym (or around life, being Los Angeles). Instead of depositing their sandals in the shoe rack, they simply step out and leave them in the doorway, forcing other members to step (or trip) over them while entering the room. The rack is less than four feet away. Whether it’s privilege or lack of self-awareness (or both, as the two go hand-in-hand) is open for discussion. The result is always a messy room. 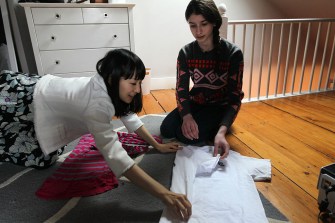 Peterson’s argument stems from teenagers and economic systems, but here’s another glaring example: climate change. Humans are the most wasteful species in the history of the planet. Our ability to manipulate natural resources into plastics, chemistry, and tons of useless products now floating around oceans is a major underlying cause of carbon emissions. Instead of waking up to clean our room, we bury our heads in our phones.

“Kondo” might be a buzzword (and annoying Instagram hashtag), but the underlying Shinto principles are worth exploring. Westerners would do well studying more Japanese culture, especially the focus on collectivism and philosophy of bowing—basically, the de-emphasizing of “me”.

Kondo’s platform is rooted in simplicity and elegance: Treat everything as if it’s sacred. Place your attention in the environment and not only does your environment improve, so do you. In an overworked and overstressed culture like America, more emphasis on objects directly in front of our eyes would do our collective nervous system wonders. Which is a hard message to get across in the land of fragmented awareness.

Explaining why he wrote 12 Rule For Life in the book’s introduction, Peterson offers an overview for our collective success:

We must each adopt as much responsibility as possible for individual life, society and the world. We must each tell the truth and repair what is in disrepair and break down and recreate what is old and outdated. It is in this manner that we can and must reduce the suffering that poisons the world. It’s asking a lot. It’s asking for everything.

Do we have the will for “everything”? The notion that “someone else will do it” cuts across economic classes, ethnicities, and genders. While I don’t agree with Peterson that millennials know nothing about economics—they’re inheriting the future we’re creating and should be allowed a voice in the matter—he’s right about the most basic principle imaginable: Clean up your room and you clean up yourself.

Cold Dark Matter Is Heated Up By Stars, Even Though It Cannot ‘Feel’ Them

The formation of cosmic structure, on both large scales and small scales, is highly dependent on how dark matter and normal matter interact. Despite the indirect evidence for dark matter, […]