Though progress is being made, our brains remain organs of many mysteries. Among these are the exact workings of neurons, with some 86 billion of them in the human brain. Neurons are interconnected in complicated, labyrinthine networks across which they exchange information in the form of electrical signals. We know that signals exit an individual neuron through a fiber called an axon, and also that signals are received by each neuron through input fibers called dendrites.

Understanding the electrical capabilities of dendrites in particular — which, after all, may be receiving signals from countless other neurons at any given moment — is fundamental to deciphering neurons’ communication. It may surprise you to learn, though, that much of everything we assume about human neurons is based on observations made of rodent dendrites — there’s just not a lot of fresh, still-functional human brain tissue available for thorough examination.

For a new study published January 3 in the journal Science, however, scientists got a rare chance to explore some neurons from the outer layer of human brains, and they discovered startling dendrite behaviors that may be unique to humans, and may even help explain how our billions of neurons process the massive amount of information they exchange. 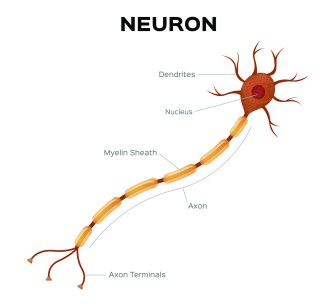 Electrical signals weaken with distance, and that poses a riddle to those seeking to understand the human brain: Human dendrites are known to be about twice as long as rodent dendrites, which means that a signal traversing a human dendrite could be much weaker arriving at its destination than one traveling a rodent’s much shorter dendrite. Says paper co-author biologist Matthew Larkum of Humboldt University in Berlin speaking to LiveScience, “If there was no change in the electrical properties between rodents and people, then that would mean that, in the humans, the same synaptic inputs would be quite a bit less powerful.” Chalk up another strike against the value of animal-based human research. The only way this would not be true is if the signals being exchanged in our brains are not the same as those in a rodent. This is exactly what the study’s authors found.

The researchers worked with brain tissue sliced for therapeutic reasons from the brains of tumor and epilepsy patients. Neurons were resected from the disproportionately thick layers 2 and 3 of the cerebral cortex, a feature special to humans. In these layers reside incredibly dense neuronal networks.

Without blood-borne oxygen, though, such cells only last only for about two days, so Larkum’s lab had no choice but to work around the clock during that period to get the most information from the samples. “You get the tissue very infrequently, so you’ve just got to work with what’s in front of you,” says Larkum. The team made holes in dendrites into which they could insert glass pipettes. Through these, they sent ions to stimulate the dendrites, allowing the scientists to observe their electrical behavior.

In rodents, two type of electrical spikes have been observed in dendrites: a short, one-millisecond spike with the introduction of sodium, and spikes that last 50- to 100-times longer in response to calcium.

In the human dendrites, one type of behavior was observed: super-short spikes occurring in rapid succession, one after the other. This suggests to the researchers that human neurons are “distinctly more excitable ” than rodent neurons, allowing them to successfully traverse our longer dendrites.

In addition, the human neuronal spikes — though they behaved somewhat like rodent spikes prompted by the introduction of sodium — were found to be generated by calcium, essentially the opposite of rodents. 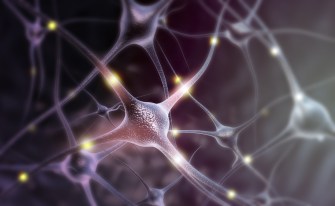 An even bigger surprise

The study also reports a second major finding. Looking to better understand how the brain utilizes these spikes, the team programmed computer models based on their findings. (The brains slices they’d examined could not, of course, be put back together and switched on somehow.)

The scientists constructed virtual neuronal networks, each of whose neurons could could be stimulated at thousands of points along its dendrites, to see how each handled so many input signals. Previous, non-human, research has suggested that neurons add these inputs together, holding onto them until the number of excitatory input signals exceeds the number of inhibitory signals, at which point the neuron fires the sum of them from its axon out into the network.

However, this isn’t what Larkum’s team observed in their model. Neurons’ output was inverse to their inputs: The more excitatory signals they received, the less likely they were to fire off. Each had a seeming “sweet spot” when it came to input strength.

What the researchers believe is going on is that dendrites and neurons may be smarter than previously suspected, processing input information as it arrives. Mayank Mehta of UC Los Angeles, who’s not involved in the research, tells LiveScience, “It doesn’t look that the cell is just adding things up — it’s also throwing things away.” This could mean each neuron is assessing the value of each signal to the network and discarding “noise.” It may also be that different neurons are optimized for different signals and thus tasks.

Much in the way that octopuses distribute decision-making across a decentralized nervous system, the implication of the new research is that, at least in humans, it’s not just the neuronal network that’s smart, it’s all of the individual neurons it contains. This would constitute exactly the kind of computational super-charging one would hope to find somewhere in the amazing human brain.

On Sept. 23, 2020, it was reported that black licorice was the culprit in the death of a 54-year-old man.
The Present

In an excerpt from her recent book, the behavior geneticist Kathryn Paige Harden carefully explores a topic that's often considered taboo: how genetics affect life outcomes.
The Past

Linguistic laws are remarkably versatile and have applications in ecology, microbiology, epidemiology, demographics, and geography.
Up Next
The Present

There's a lot we can do with current technology to help stem the tide of climate change, but future technology may help even more.