It’s everybody’s dirty little secret. Which is to say it’s not much of a secret at all. Even when we’re in relationships, we fantasize about other people. We may feel guilty about it—are we betraying our significant others?—or not, chalking it up to being just one of those things we can’t help but do. But what, if anything, does it say about our full-time relationships?

Superdrug Online Doctor asked 1,613 people from Europe and the U.S.—via online survey platforms Amazon Turk and Clickworker—how fantasizing works when you’re already hooked-up. Their data is published in infographic form as Fantasizing About Other People.

All visualizations in this article are bySuperdrug Online Doctor. 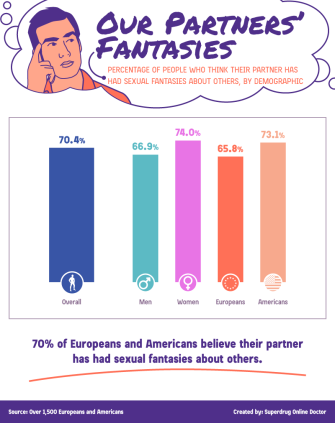 We suspect our partners are thinking of someone else

Over 70% of us assume our loved ones are imagining a little lovin’ with someone else. Most convinced of all are American women, who are probably right. Americans in general, are more concerned than Europeans, who may be a bit more “sophisticated” about secret dalliances than Americans. 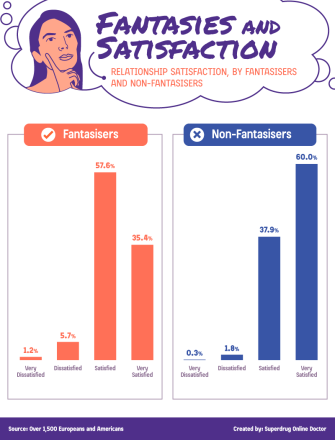 If you’re so happy, why fantasize?

The survey suggests that fantasizing is not an indicator of serious dissatisfaction with a partner. People who fantasize are overwhelmingly “satisfied” in their relationships, though it is true that those who don’t fantasize report being “very satisfied.” Are those non-fantasizers super-fulfilled? Maybe, but “satisfied” is hardly, well, “dissatisfied.” 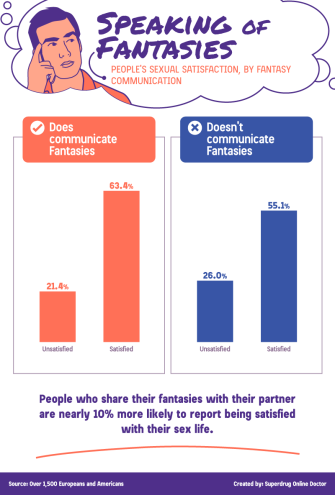 Should you admit your sexy daydreaming?

Probably you should, since those who tell their partners what’s going on in those lusty noggins are 10% more satisfied than those who don’t. (The negative impact of guilty secrets, maybe?) 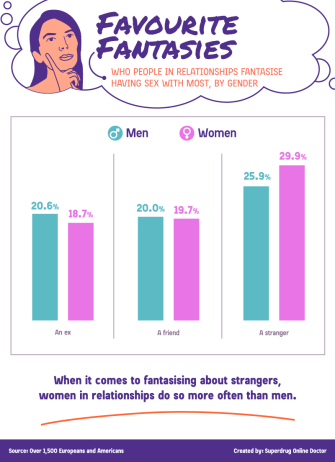 So who do we fantasize about?

We mostly picture ourselves being intimate with strangers, by a wide margin—certainly, it’s easier to think of them as perfectly attractive since we don’t really know them and thus about any flaws they might have. Women are most strongly drawn to strangers. Men, the dirty dogs, think more about hooking up with exes and friends. 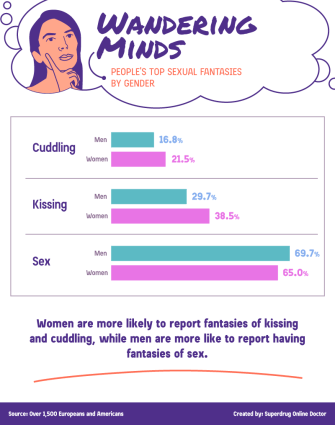 What do we fantasize about?

For men and women both, it’s mostly about sex, though it’s clearly more of a priority for men. Also true to stereotype, women do think more about cuddling and kissing, but not that much more. We’re all so romantic. Or at least as many as 38.5% of us are.

Arguments are a normal and often healthy part of a relationship. It all depends on picking the right kind of arguments, though.
Thinking

If argumentation led to nothing, it would soon be thrown into the evolutionary dustbin.
The Present

Yes, there are reasons to worry about Twitter, but it’s not about the bots.
Up Next
Health

Carl Sagan on why he liked smoking marijuana

Carl Sagan liked to smoke weed. His essay on why is fascinating.