What encourages us to seek out potential partners? What interactions encourage us to keep dating, despite the possibility of being rejected? The sexual behavioral system of humans has evolved over millennia and has been the topic of many scientific studies over the years. The concept of dating and pursuing romantic partners has been a curiosity to everyone, it seems, with lists like this one from Mental Floss detailing what dating was like throughout the centuries.

Ultimately, romantic “success” depends on our ability to target the right potential partner whom we not only find attractive but who is also attracted to us. Fear of rejection, self-doubt, and anxiety are just some of the obstacles humans need to overcome to make a meaningful, romantic connection with another person. 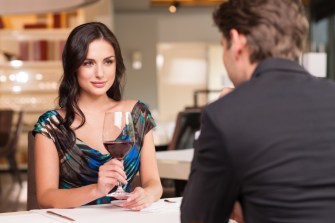 The right mood could land you the right date, according to a new study. Credit: BlueSkyImage on Shutterstock

According to a 2020 study by a group of psychologists at the University of Rochester (and the Israeli-based Interdisciplinary Center Herzliya), humans see possible romantic partners as a lot more attractive if they go into the interaction with a “sexy mindset.”

In a previous study, the pair discovered that when people feel greater certainty about a romantic partner’s interest, they put more effort into seeing that person again. Additionally, this study found people will rate the possible partner as more “sexually attractive” if they knew the person was interested in seeing them again.

For this project, Reis and Birnbaum, along with their team, examined what would happen if a person’s sexual system is activated by exposing them to brief sexual cues that induced a thought process that included the potential for sex or heightened attraction.

Across three separate studies, the team discovered that this sexual activation helps people initiate relationships by inducing them to project their desires onto prospective partners.

In the first study, 112 heterosexual participants (between the ages of 20-32) who were not in a romantic relationship were randomly paired with an unacquainted participant of the opposite sex. Participants introduced themselves to each other (speaking about their hobbies, positive traits, career plans, etc.), all while being recorded.

The team then coded the recorded interactions and searched for nonverbal expressions of immediacy (such as close proximity, frequent eye contact, smiles, etc.) that could indicate interest in starting a romantic relationship.

In the study, the team determined that the participants exposed to a sexual stimulus before the meeting (versus those exposed to a neutral stimulus) exhibited more immediacy behaviors towards their potential partners and also perceived the partners as more attractive and/or more interested in them.

In the second study, 150 heterosexual participants (between the ages of 19-30) who were not in a romantic relationship served as a control for the potential partner’s attractiveness and reactions. All participants in study two watched the same pre-recorded video introduction of a potential partner of the opposite sex. They then introduced themselves to the partner while being filmed themselves.

The researchers found that the activation of the sexual system led to participants viewing the potential partner as more attractive as well as more interested in them.

Study three: How it all ties together

In this study, 120 single heterosexual participants (between the ages of 21-31) interacted online with another participant who was actually an attractive opposite-sex member of the research team. This was a casual “get-to-know-you” kind of interaction. The participants rated their romantic interest in the other person as well as that person’s attractiveness and interest in them.

Again, the team found that sexual activation increased a person’s romantic interest in the other person, which, in turn, predicted that the other person would then be more interested in a romantic partnership as well.

The basis of this multi-study theory is simple: Having active sexual thoughts arouses romantic interest in a prospective partner and often leads to an optimistic outlook on dating.

“Sexual feelings do more than just motivate us to seek out partners. It also leads us to project our feelings onto the other person,” said Reis to Eurekalert.

Reis goes on to explain, “…the sexual feelings need not come from the other person; they can be aroused in any number of ways that have nothing to do with the other person.”

What can elite athletes teach you about how to win?
Smart Skills

Unplugging only ignores the hard work of overcoming your distractions.
Hard Science

The overview effect is another reason to speed up space exploration

“You develop an instant global consciousness, a people orientation, an intense dissatisfaction with the state of the world, and a compulsion to do something about it.”
Health

When it comes to vetting people for friendship, body odor seems to be a decisive factor.
Up Next
Health