In 2005, a 23-year-old woman was caught in a traffic accident that gave her a traumatic brain injury. Her doctors diagnosed her as being in a vegetative state — that is, absent of awareness and responsiveness, but still able to keep her heart pumping, her lungs breathing, to fall asleep and become awake, and so on.

Five months after her accident, however, researchers conducted an experiment showing that she had not completely lost her conscious awareness. Using an fMRI, researchers asked her to imagine playing tennis or walking through her house. Though the patient had been unable to respond to any other cues, the fMRI showed that her brain lit up when asked to imagine these things, suggesting that she was, in fact, conscious to some degree — just unable to move her hands or open her eyes on command. This patient would be the first time that signs of consciousness were detected in an ostensibly vegetative state using fMRI.

The trouble with diagnosing vegetative states

Since then, more and more cases of this sort have come to light. In fact, over the years, researchers estimate that around 10 to 20 percent of supposedly vegetative patients in fact experience what’s called “covert” consciousness. Patients with covert consciousness do not respond to behavioral tests of awareness yet show brain activity related to awareness. It is important to note that covertly conscious patients do not fail to respond to behavioral tests because they are paralyzed. Instead, they fail to respond because the parts of their brain that respond to stimuli are damaged — they can still move, and sometimes will, but typically not in response to external stimuli.

After a traumatic brain injury that lands a patient in an ostensibly vegetative state, many clinicians assume a poor prognosis. As a result, many families decide whether to keep their loved one on life support or to withdraw it within the first three days after admission.

“The problem with severe brain injury,” said neuroscientist Nicholas Schiff in The Scientist, “is that you have people who all look the same who could have very different trajectories of recovery over time, response to treatment, or already achieved level of recovery.” Better diagnostic tools are needed to “sort the variance and also to figure out who we should look at more closely and immediately.” 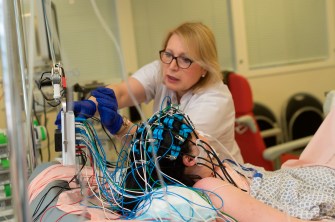 A healthcare professional administers an EEG.

Patients with covert consciousness have been shown to recover at higher rates than those in persistent vegetative states even though they appear to be the same from the outside. Deciding to pull the plug on a loved one is never an easy task, but the uncertainty of whether or not they are truly beyond help makes it even more difficult.

Fortunately, researchers are working on ways to improve diagnosing these cases of covert consciousness. While fMRIs were the original way that researchers detected covert consciousness, applying them in critical care settings can be challenging. Electroencephalographs (EEGs) are likely to be far more useful as a diagnostic tool.

The first large-scale demonstration of using EEGs to diagnose cases of covert consciousness was recently published in the New England Journal of Medicine, where doctors asked patients to move their hands (which neither vegetative nor covertly conscious patients can do), and then used machine learning to decipher their EEG readings to identify brain activity in response to the commands. Twelve months later, 44 percent of those patients who were detected to have some brain activity were no longer vegetative and could function independently compared to just 14 percent of patients with no sign of activity in the EEG.

“This is very big for the field,” Nicholas Schiff told The New York Times. “The understanding that, as the brain recovers, one in seven people could be conscious and aware, very much aware, of what’s being said about them, and that this applies every day, in every I.C.U. — it’s gigantic.”

Tags
brainconsciousnesshealthmachine learningneuroscience
In this article
brainconsciousnesshealthmachine learningneuroscience
Related
Thinking
Visual thinking: How to understand the inner lives of animals
Humans are good visual thinkers, too, but we tend to privilege verbal thinking.
The neuroscience of loving music
Humans are musical animals four million years in the making, explained by music expert Michael Spitzer.
▸
8 min
—
with
Michael Spitzer
Neuropsych
How you breathe affects your brain
Your breathing rhythm influences a wide range of behaviors, cognition, and emotion.
Neuropsych
Daily caffeine intake temporarily alters your brain structure
Compared to people who took a placebo, the brains of those who took caffeine pills had a temporarily smaller gray matter volume.
Neuropsych
Study reveals why some people are more creative than others
Creative people are better able to engage brain systems that don’t typically work together.
Up Next
Hard Science
How deforesting the Amazon causes warming in distant areas
The effects of deforestation extend farther than previously thought.