Aside from mythical spiritual figures and biblical kings, humans are not objective in how they react to the world. As much as we would like to be fair and impartial about how we deal with the situations that arise on a daily basis, we process them through a complex series of internal biases before deciding how to react. Even the most self-conscious of us cannot escape the full spectrum of internal prejudices.

Brain biases can quickly become a hall of mirrors. How you understand and retain knowledge about cognitive shortcuts will determine what, if any, benefits you can derive from the substantial psychological science that’s been done around them. Here we take a look at different ways of understanding cognitive biases, and different approaches to learning from them. Enjoy!

Originally a pioneer of German electronic dance music, Peter Baumann now devotes himself to exploring the science and philosophy of the human experience. To him, cognitive biases are everything and nothing.

There is nothing that is not a bias.

We prefer sweet food to bitter food, solid ground to unstable ground, and are imbued with cultural assumptions that help us live more peacefully in society. Noting that biases exist in the biological domain, Baumann frees cognitive bias from the trap of being views as an entirely mental phenomenon.

Biases do not obstruct a healthy or positive life.

Biases are shortcuts we’ve inherited through past generations. They are designed to help us to survive. Confirmation bias, for example, solve the problem of not being able to take in all the world’s information each time we make a decision. Of course, being closed off to new information is equally hazardous in modern society, where information is the currency of our knowledge-driven world.

The uniqueness bias amuses him the most because it’s a bias that each person necessarily has. We all think of ouselves as unique because each person is at the center of their own existence. But interestingly, there are circles of uniqueness. People you have close relationships with are more unique than people you don’t know. Which of course has some obvious limitations as a reliable point of view.

What to do about biases

Listen better, says Baumann. Understanding the predispositions we bring to the table should make us more open to understanding other people’s points of view. If you’re not so special, not so right, not so perfect all the time, there’s a greater likelihood that you have something valuable to learn from others. 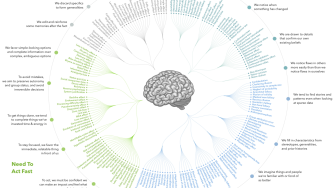 Buster Benson (a marketing manager at Slack) decided to organize 175 known biases into a giant codex.

Benson (with help from illustrations by John Manoogian III), sorted biases for duplicates and grouped them into four larger categories, each called a “conundrum” or “problem”. All four of these limit our intelligence but are actually trying to be helpful. According to Benson, “Every cognitive bias is there for a reason — primarily to save our brains time or energy.” But the end result of utilizing such mental shortcuts, which are often useful, is that they also introduce errors into our thinking. By becoming aware of how our minds make decisions, we can be mindful of the inherent inaccuracies and fallacies and hopefully act with more fairness and grace.

The world is a set of information that’s just too enormous for your brain to handle.

If something has already been in our memories and we’re used to seeing that issue a certain way, that’s how our brain is likely to react to it again. The biases that stem from this are plenty – the Attentional Bias, for example, that tells us to perceive events through our recurring thoughts at that time. This prevents us from considering alternate paths and possibilities.

Our biases that result from this kind of thinking include the context effects, the mood-congruent memory bias, or the empathy gap, which makes us underestimate the influence of visceral drives on our attitudes and actions.

We look at how much something has changed more than what the new value of this something is if it was presented by itself. Cue the Focusing effect, Money illusion, Conservatism, or Distinction bias.

And because you can’t grasp everything, you’ll always be missing a lot of essential information.

We utilize stereotypes and quick fill-in-the-gaps thinking to make decisions about something when we don’t know everything about it. Mental mistakes like the Group attribution error, Ultimate attribution error, Stereotyping, Essentialism, the Bandwagon effect and the Placebo effect all arise from such a cognitive approach.

According to Benson, and probably to your own life experience, we also tend to like more the things and the people we know than those we don’t. In this grouping, we’d find the Cheerleader effect and the Positivity effect among others.

You need to act fast, so you’ll be relying on a limited set of information.

These cognitive issues arise from having to make decisions without having all the time and information you’d prefer. We often have to decide on a course of action quickly, relying on biases and instinct rather than all the possible facts.

One way to make decisions quickly is to do it with confidence, convincing yourself that what you’re doing is important. Because of this, we often get overconfident, leading to such biases as the Dunning-Kruger effect, when people overestimate their abilities as well as Optimism Bias and Armchair Fallacy.

When we have to just go for it, we also tend to “favor the immediate,” write Benson. The thing in front of us is worth much more than something potential and distant.

You need to remember some things. But it’s impossible (and totally undesirable) to remember everything.

There’s just so much information that permeates our daily lives that we are constantly made to choose between what to address and what to forget. This overload results in choosing generalizations and other biases that help us deal with the data onslaught.

Some of the tactics we rely on include creating false memories or discarding specifics in favor of stereotypes and prejudices. Unfortunately, it’s just easier to function that way for some people.

We also tend to reduce events and lists to commonalities, choosing a small number of items to stand for the whole. Another thing we do is storing memories based on how we experienced them. This is when the circumstances of the experience affect the value we place on it. This is also when we get such great biases as the Tip of the tongue phenomenon, which is when we feel like we are about to remember something but we just fail to do it. You know that feeling.

Another fun modern bias of this kind is the Google effect, also called “digital amnesia”. This is when we quickly forget information easily found online using a search engine like Google. Let’s see if that happens with this article.

You can buy the codex (now featuring 188 biases) here. Hang it on your wall (and hopefully let some of it inform your thinking)!

“You look at this overwhelming array of cognitive biases and distortions, and realize how there are so many things that come between us and objective reality,” Manoogian explained The Huffington Post. “One of the most overwhelming things to me that came out of this project is humility.” 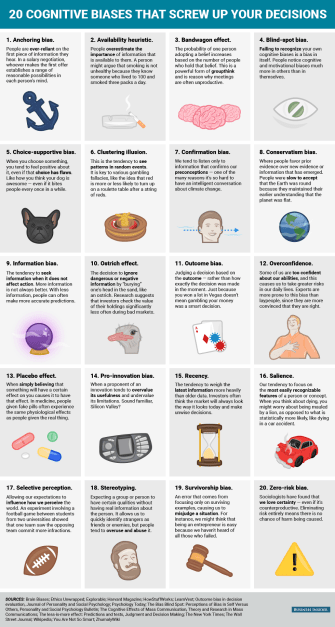 Rationality in Action: Look at a Problem as an Outsider

Julia Galef, President of the Center for Applied Rationality, says that looking at issues as an outsider is a surefire approach to outwit the commitment bias and the sunk-cost fallacy. Intel famously used this approach to leave behind a faltering memory-chip product for more lucrative ventures.

The results of a recent study suggest that some clinicians might be failing to explore other causes when treating gender dysphoria.
Up Next
The Present

As the climate warms, there may be a slight increase in male newborns