Creative intelligence is the ability to observe or act with any of the senses, enact mimicry to a certain fidelity and then through repetition make that thought, action or idea your own before you can then develop it to new places it’s never gone before.

The creative spirit and process is something that is highly sought after. For writers and artists, the concept has even been deified as the Muses. Nowadays it’s not just the eccentrics and poets looking to get a creative hit, but also business people and regular students seeking out that creative magic.

It’s a process that, for a while, many people didn’t think could be taught. It’s more than a set of skills or behaviors within a predefined set of parameters. It’s mysterious and novel. Creativity manifests when somebody has mastered a subject or skill and then needs to invent a new solution to a problem that couldn’t be overcome with any previous method.

While it’s difficult to teach someone a new creative solution, it is possible to instill the fundamentals so that a person may go on and become creative in their own right. 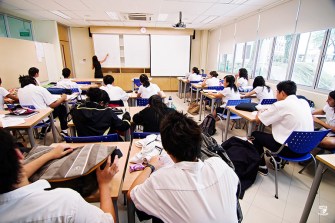 Although creative trainings differ in scope and the field they’re trying to train people in, the authors found a few fundamental trends for successful programs. Most successful creativity training shares a common foundation: divergent thinking. They write:

The authors have identified divergent thinking as something that is fundamental towards teaching and recording creative ability. But that’s just one part of creative abilities.

If You Work in a Creative Industry, You Should Steal Other People’s …

The Osborne-Parnes model is a very popular system used in educational and business settings. It’s split into six steps, each one bringing with it a divergent thinking pattern to challenge status quo ideas.

Creative thinking is one of collaboration and bouncing ideas off of others in a social setting. Promote student’s creativity by validating their off-hand ideas that go beyond the subject matter.

It was in 1956 that Louis R. Mobley was tasked with turning IBM’s executives into creative powerhouses. The executive school was built around six insights that Mobley came up with for inspiring and teaching creativity.

The process isn’t going to be easy and learning to be creative is still going to be difficult. Some are more apt to it than others, but there is no doubt that the seeds of the imagination can be taught and passed down to others.

Why your brain resists original thinking, and how to break through

The artifacts were often made from found objects – an Ivory dish-soap bottle transformed into an earthenware figure.
The Future

Successful forgers are remembered as great conmen, not artists. This is strange, considering their forgeries fooled even the most seasoned critics.
High Culture

Books that were rarely taught in 1963, when baby boomers were students, became classics when those same boomers were teachers and parents.
Neuropsych

Malevolent creativity: How human nature blinds us from novel threats

When you don’t know what you’re looking for, it’s easier to miss it.
Up Next
Neuropsych

The five stages of psychogenic death — aka, “give-up-itis.”