BJ Miller, MD, is an assistant clinical professor of medicine at the University of California, San Francisco where he practices and teaches palliative medicine. He has been profiled in The[…]
Go to Profile 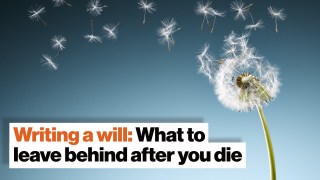 It may be an uncomfortable thing to do, but creating a will can save your loved ones a lot of headaches after you're gone.
▸
5 min
—
with
BJ Miller

BJ MILLER: As these things go, there are layers of issues. So a will is not sort of a simple, one piece of paper kind of document. There are many different kinds of wills. There's wills to handle your things. There's wills to handle your body. And there are wills to handle your legacy, in a way. We have layered in systems and structures and legalities and all sorts of paperwork to this subject. So, if we have some old-fashioned notion that death is natural, it'll come, society absorbs death all the time, family members absorb death all the time, that we can just kind of let nature take its course, well, again, we've supervened in nature in too many ways by now.

So if you don't prepare, if you don't do your will, if you don't set up a trust, if you don't do your advance directives, et cetera, then you fall into these default mechanisms in our systems that aren't necessarily always commonsensical. So one thing that happens all the time -- and it happens at every level of society -- I mean, most recently, Prince famously died and had not done his will. And it's left an enormous mess for his family and his estate. And they'll be fighting in that family for I don't know how long, for a long time. And so much of that could have been obviated by doing a will, putting it in a trust. It's not fun. But it's also not that difficult. You just have to take time to do it.

So this is sort of one of the ways that death goes from difficult to feeling impossible, or difficult to feeling almost cruel. The pain that we layer on top of our grief can be profound. And it's often for the lack of these very simple things, like you just didn't do your paperwork. Or a common scenario is someone takes the time to put their estate into a trust-- if you put into a trust, your family gets to avoid probate, which is a hellish legal process that goes on for years, generally speaking. But they'll set up a trust but they'll forget to put their assets into the trust. Or they'll forget to sign a piece of paper.

Or they'll do their will, and then not tell anyone where it is. These kinds of things are really common. And you can imagine, it's a simple mistake. I mean, there's an advance care directive, which is often also called a living will. And that's where you stipulate your wishes for how do you want to be treated if -- when you're who do you want to be your health care proxy, making decisions for you if you can't? That is probably the single most important thing any of us can do, is to name our health care proxy. And that's a relatively easy process.

So you've got the living will slash advance directive -- naming your proxy, naming your durable power of attorney for finances. And then you can get into things like who gets what after you're gone, et cetera. So there's that bundle of paperwork that also will often cover what's called code status. So if you die, when you die, do you want medical effort to try to revive you, resuscitate you? Or do you want to let people make you comfortable and let you go? You can make those kinds of stipulations in your will and your advance directive.

On top of that, if you have assets, if you have anything that you want heirs to inherit beyond personal items, you'll really want to consider a trust. And that's a legal protection that, again, gets to avoid probate for your heirs. And that can be a really powerful thing to get done. So those are sort of the mechanical pieces -- like what to do with your stuff, and what do you want done with your body, and sort of navigating the material world. And then there's this other thing around a legacy and what any human leaves behind -- and of course, especially if we have family, but anyone, friends, anyone that you care about, if you want to pass along tips of wisdom or things you've learned, or pass along the narrative of your life as you see it, or what you think of yourself in the world or people in the world, or what you hope for for your heirs or for the future -- these, much more spiritual, philosophical, those issues, you can also transmit those.

Certainly, like in an oral tradition, you can talk to people you love, and you can make yourself known that way. But there is this really beautiful ancient thing, this ancient process called an ethical will. And they're gaining some traction again. These have been around for millennia. This is sort of a way to document your story and all the things I just mentioned -- all of what you might want to pass along, things you've learned, et cetera. And there's a format for this. And you can lay out your feelings, really, your thinking in an ethical will. And you can pass that on to anyone you wish to as well. That's a beautiful thing to do. I mean, most people, sure, when my parents go, I'm sure I'd love that old ashtray that my grandfather used all the time. Or I wouldn't mind what cash they have left or whatever.

The best hospitals have more superbugs. Do patients have a right to know?