“Monkey see, monkey do” has been the way we have historically understood the learning process for humans and animals. However, scientists at UT Southwestern recently implanted a false memory into the brains of young zebra finches, teaching them a melody they had never heard before.

The researchers identified the two regions of the brain responsible for encoding the memories through which the finch learn song-element durations. They were then able to manipulate the interactions between those regions of the brain using optogenetics, a method of manipulating living tissue with light to control neural function. This guided the birds in the development of courtship songs they had never heard.

When one learns from observation, the memory of another individual doing something correctly guides you in learning to perform the behavior. How those “behavior-goal” memories are formed has been a mystery. Dina Lipkind, a biologist at York College, told The Scientist that the authors in this study were able to crack the first part of the process by discovering how a memory is initially formed that guides an individual to performing that behavior later on.

The anatomy of bird ‘inception’

Typically, young male zebra finches learn to sing a mating song from their father or another adult tutor. The finches use their song to court female birds in a behavior that is called “directed singing.” Naturally, the birds spend a great deal of time practicing their song in private so they are ready to swoop in and serenade a female when the opportunity arises.

Researchers optically tutored the finches using light pulses that stimulated certain neural circuits, which were designed to mimic short song elements. This “opto-tutoring” in the young birds shaped the temporal structure of their mating song in adulthood by imprinting “memories” of the song into the birds’ brain, bypassing the tutor’s lessons. The finches sang the courtship songs that corresponded to the duration of time light had kept the neurons active. Birds that received shorter pulses sang songs with a shorter duration, and those that received extended pulses held their melodies longer.

Interestingly, the researchers found that opto-tutored male birds grasped the social norms of singing. Like regularly tutored birds, they practiced their mating song when alone and, when presented with a female finch to woo, they performed using the shorter and extended notes they learned through the false memory implantation.

While the researchers were able to imprint the duration of syllables in the birds’ memories, that isn’t everything that they need to learn in the song. There are other important characteristics that a zebra finch needs to nail, including pitch and correctly ordering the syllables. Next the researchers want to identify the circuits that carry that other information, and investigate the ways to encode those memories. 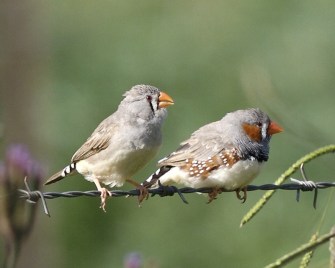 The groundbreaking study could potentially serve as a blueprint for discovering how genetic and social environments influence neural circuits over time.

“This is the first time we have confirmed brain regions that encode behavioral-goal memories — those memories that guide us when we want to imitate anything from speech to learning the piano,” said Dr. Todd Roberts, a neuroscientist with UT Southwestern’s O’Donnell Brain Institute in a press release. “The findings enabled us to implant these memories into the birds and guide the learning of their song.”

Because the zebra finches vocal development process is similar to humans, this knowledge might help us better understand the mechanisms of human speech and language learning. The hope is that someday it will be used to target certain speech genes that are disrupted in people with neurological conditions that affect vocalization, such as autism. Not only that, but it could be used to help kids understand other social patterns and cues.

Of course, the neural pathways of the human mind are a great deal more complex than the circuitry of a songbird’s brain. While this research points us in the right direction on where to look for more information on neurodevelopmental disorders, it will be a while before science can imprint the human mind with false memories via light pulse.

As the saying goes: “Pain is inevitable. Suffering is optional”.
Up Next
Neuropsych

Scientists find a marker for schizophrenia in human hair

Not only will this help diagnose schizophrenia earlier, but it also points to a possible cause of schizophrenia.