Americans have a love-hate relationship with mathematics. On the one hand, we understand that success in our technology-dependent world requires proficiency in mathematics, and if we don’t cultivate this proficiency in students, we may languish behind those who do. On the other hand, we’re just bad at it.

Research seems to support this view. The National Assessment of Educational Progress found that, in 2015, just 25 percent of 12th graders performed at or above proficiency in mathematics. Nor are we doing well when compared to other countries. The United States’ mathematics performance score (474 mean score) falls below the average for all OECD countries (494). Meanwhile, Japan, China, and Singapore are crushing it (mean scores 539, 540, and 564 respectively).

Is it any wonder that the refrain “I’m not a math person” has become hackneyed? This defense contains a troubling subtext: Some people are born good at math, some aren’t, and the speaker is the latter. This is simply untrue.

In a conversation with Richard Dawkins, Neil deGrasse Tyson explains why: “If there’s any one subject that the greatest number of people say, ‘I was never good at insert a topic,’ it’s going to be math. So I say to myself, ‘If our brain were wired for logical thinking, then math would be everyone’s easiest subject, and everything else would be harder.’ I’m kind of forced to conclude that our brain is not wired for logic.”

Tyson’s right. The brain is (mostly) not hardwired for mathematics. But if that’s the case, then where did the myth of the math person come from, and how can we correct for it? 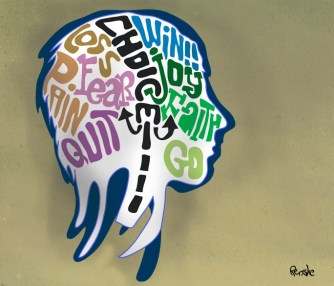 While there is no innate math ability in this brain, there sure is a lot of room for math anxiety.

The reason skill in mathematics isn’t genetically determined is because math hasn’t been around long enough to be written into our genes. As developmental psychologist Steven Pinker writes in How the Mind Works:

On evolutionary grounds it would be surprising if children were mentally equipped for school mathematics. These tools were invented recently in history and only in a few cultures, too late and too local to stamp the human genome. The mothers of these inventions were the recording and trading of farming surpluses in the first agricultural civilizations.

With that said, Pinker notes that we do come pre-equipped with some innate mathematical intuitions. For example, toddlers can choose which picture has fewer dots, children can divide snacks to share, and all cultures have words for numbers (even if that lexicon is limited to one, two, and many.) All feats managed with no formal schooling, and all evolutionary advantageous.

Citing the work of mathematician Saunders Mac Lane, Pinker speculates that these intuitions may have provided the inspiration for contemporary branches of mathematics: grouping, arithmetic, geometry, and so on.

These intuitions are not the same as the highly formal rule systems we start learning in elementary school, though. He explains the distinction as so: Anyone can tell you that cutting through a field is shorter than walking its edges, but it takes a mathematician to point out that “the hypotenuse is equal to the sum of the squares on the other two sides.”

Professors Miles Kimball and Noah Smith are highly critical of the math people myth, calling it “the most self-destructive idea in America today.” Writing for the Atlantic, they argue this pernicious idea originates from a pattern children suss out when they first enter math class.

As test and homework scores accumulate, the prepared children begin to recognized their successes. They assume they are “math people,” take pride in their achievement, learn to enjoy the subject, and push themselves to work harder.

The unprepared children, however, don’t realize that the prepared children had a head start. They assume they weren’t born “math people,” find the subject frustrating, and don’t push themselves, believing achievement will remain out of reach because of some unrecifiable deficiency.

The result is that “people’s belief that math ability can’t change becomes a self-fulfilling prophecy.”

Teachers and parents may also perpetuate the math person myth, even when trying to reduce math anxiety and encourage students that they can succeed.

Consider Dr. Randy Palisoc. He claims that math difficulties lie in our dehumanized approach toward teaching it. He believes that if we show students that math is a language “just like English, Spanish or Chinese” and that it can be used to communicate, they will recognize their natural talents and approach the subject with alacrity.

Mathematician Eddie Woo follows a similar tactic, but he relegates mathematics to a human sense, one akin to sight and touch:

Naturally some people are born with sharper sense than the rest of us; others are born with impairment. As you can see, I drew a short straw in the genetic lottery when it came to my eyesight. Without my glasses everything is a blur. I’ve wrestled with this sense my entire life, but I would never dream of saying, ‘Well, seeing has always been a struggle for me. I guess I’m just not a seeing kind of person.’

Both Ralisoc and Woo propose to reduce abstraction in the teaching of math — make it less hieroglyphics on a blackboard and more an exploration of the student’s world. That’s an admirable goal. I quote them here only to show how the metaphors teachers and parents may use to encourage unprepared students, in fact, perpetrate the genetic myth.

Woo’s argument undercuts his own point. A person born with perfect eyesight will effortlessly read the 20/20 line on an eye chart. But if you are born with poor sight, the eye chart will forever look like a lazy post-impressionist painting. Only corrective lenses, not hard work, can change this fact. He wouldn’t say, “I’m just not a seeing kind of person,” because it’s an odd thing to say. But that doesn’t make it any less true.

Similarly, math is not a language as Ralisoc claims. Language is something children master effortlessly because their brains are programmed with what linguists call “universal grammar.” Every English-speaking child knows that the sentences are spoken in Subject-Verb-Object format and that you add an s to most words to pluralize them. They manage this incredible feat without any formal schooling.The same cannot be said for their multiplication tables.

Students know this. They understand that eyesight comes naturally, and while they may not have learned about universal grammar, they have a sense that language acquisition came easily to them. They didn’t even have to think about it.

Metaphors such as these, even if presented with encouragement, are wrong and reinforced the belief that being a math person requires being born with an innate gift for the subject. 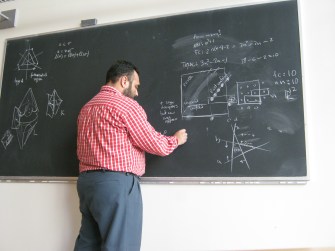 Only practice and hard work will can translate this math teacher’s blackboard for students.

But if math is not hardwired into us, why do some people become math people while others perpetually flounder? According to Pinker, it’s the same reason some of us play Carnegie Hall while others don’t. Practice.

“Mastery of mathematics is deeply satisfying,” Pinker writes, “but it is a reward for hard work that is not itself always pleasurable. Without the esteem for hard-won mathematical skills that is common in other cultures, the mastery is unlikely to blossom.”

To promote this sense of hard work and esteem, Kimball and Smith argue that we need to change the way we teach math and how our culture views intelligence as a whole. Namely, we need to switch from fixed-mindset mathematicians to growth-mindset ones.

Put simply, a growth mindset sees skills and intelligence as something that can be developed. Failure, in this perspective, is a learning experience that allows for a reassessment before the next attempt. A fixed mindset, on the other hand, sees skills and intelligence as something you are more-or-less born with. Failure, here, is simply evidence of one’s own inaptitude.

Kimball and Smith cite the work of psychologists Lisa Blackwell, Kali Trzesniewski, and Carol Dweck to support their argument. Dweck, et al., set up an experiment where they taught students that intelligence was “highly malleable” and could be “developed by hard work.” The experiment’s control group was only taught how memory works.

The students who learned that intelligence was malleable through hard work received higher grades, and those who switched from a fixed-mindset to a growth one showed the most improvement. The control group showed no such improvement.

Kimball and Smith also note that many East Asian countries — the ones currently dominating in math performance scores — utilize the techniques of hard work and a growth mindset as part of their culture.

Quoting an analysis by Richard Nisbett’s, they point out that children in Japan go to school 60 more days a year than U.S. students, study more hours a day, and are culturally more accustom to criticism, leading them to be more persistent to correct failures.

“We see our country moving away from a culture of hard work toward a culture of belief in genetic determinism,” Kimball and Smith conclude. “In the debate between ‘nature vs. nurture,’ a critical third element — personal perseverance and effort — seems to have been sidelined. We want to bring it back, and we think that math is the best place to start.”

True, practice and a growth mindset won’t guarantee a teaching position in Harvard’s math department. If that’s your goal, you’ll need a healthy dose of raw intelligence and luck. But Kimball and Smith’s point isn’t that we can all become math geniuses.

Instead, by replacing the math person myth with an ethos of hard work and a growth mindset, we can teach children to achieve their personal best. For most students, this will mean reaching at least high school-level proficiency, but even if it doesn’t, it will help them see failure as a chance to improve, not a source of debilitating math anxiety.

Maybe we can’t all be math people, but we can all learn to love and appreciate the Queen of the Sciences in our lives.

Nikolaas Tinbergen’s concept of “supernormal stimulus” explains why humans are attracted to a heightened version of reality.
Thinking

Game theory is a unique combination of math and psychology. Its applications turn up everywhere, from nuclear war to Tinder to game shows.
The Well

Almost all our school improvements fail. Here’s why.
▸
with
Kathryn Paige Harden
Up Next
Hard Science

NASA research finds a new direction in searching for signs of life in the Universe.