You show a toddler a treat. Out of sight, you place it under one of two opaque cups. You lift up one cup, but there’s no treat. You set that cup back on the table. The toddler makes a logical inference: It’s under the other cup.

This two-cup hidden-item task is commonly used to measure cognitive abilities and development. Studies have shown that 2-year-olds and even some animals can reliably choose the right cup, suggesting they’re capable of inferential reasoning. Specifically, they seem to be reasoning through a disjunctive syllogism: given A or B, if not A, then B.

Still, for toddlers and animals, it’s hard to know whether they’re actually using inferential reasoning. Perhaps they frame it like: maybe A and maybe B.

To find out whether monkeys actually have the brains to reason through a disjunctive syllogism, a recent study used an updated form of the hidden-item task. The results showed that monkeys can, suggesting that animals don’t need verbal labels for logical concepts like “or” and “not” to make logical choices.

In the study, published in Psychological Science, researchers trained a set of baboons on the two-cup hidden-item task. Most of the baboons got the hang of it, successfully selecting the cup with the treat (a grape) above chance levels. Then the researchers added a twist, introducing a total of four cups (opaque, polyvinyl-chloride cylinders) instead of two. 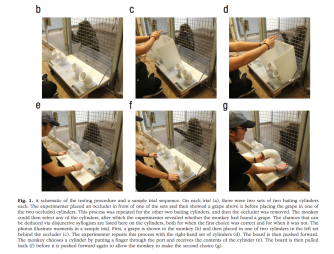 The task was set up like this: A researcher and a baboon were separated by a cage. In front of the researcher was a wooden board, on top of which were four cylinders. The wooden board could be moved into the baboon’s side of the cage, where the baboon could make a decision by pointing to a cylinder.

The researcher started by lifting all cylinders to reveal they’re empty. She showed the monkey a grape. To prevent the baboon from seeing where the grape went, she’d place an occluder in front of two of the four cylinders, and then placed the grape in one of the two cylinders. The researcher then slid the occluder over to the remaining set of two cylinders and repeated this process.

The baboon was then presented with the board to make a decision. The baboon indicated its choice by pointing to one of the four cylinders. If the baboon guessed correctly, it got the treat. If it guessed incorrectly, the researcher revealed that the cylinder was empty. No matter the outcome, the researcher pulled away the wooden board for a few seconds, and then presented it again so the baboon could make a second choice.

Why set up the experiment like this? The baboons already seemed to have a solid grasp of the two-cup hidden-item task (given A or B, if not A, then B). But the four-cup task put their understanding of it to the test: If the baboons were indeed reasoning through a disjunctive syllogism, they would understand that there’s a dependent relationship between each set of two cups.

In other words, they would understand that if cup 3 was empty, they should stay within that same set and point to cup 4, not switch their focus to the next set by pointing to cup 1 or 2.

The baboons seemed to understand this logic, according to the study results.

“Specifically, when subjects chose an empty location first, they were more likely to stay in the same baiting set and choose the other cylinder in the set (59% of trials, 271/463) than switch to the other set (41% of trials, 192/463),” the researchers wrote. “Conversely, when subjects chose a cylinder containing a grape for their first choice, they were more likely to switch to the other baiting set and choose either one of the two cylinders (66% of trials, 267/403) than stay in the same set (34% of trials, 136/403).” 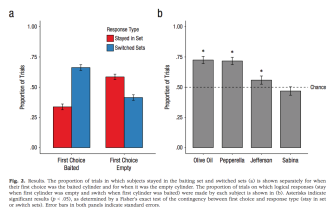 What’s more, the baboons often displayed confidence in their decisions: When they discovered that a cylinder within a set was empty, some of them began pointing at the remaining cylinder before the wooden board was even presented to them. The baboons “prepointed” correctly 79 percent of the time.

“Overall, our results show that nonhuman primates have the capacity to represent the abstract, combinatorial, or logical thought required to reason through a nonverbal disjunctive syllogism,” the researchers wrote. “To date, this has been shown only in children of at least 3 years old and in a single African gray parrot.”

But while the researchers said their results indicate that monkeys have a “higher level nonverbal cognition,” further research is needed to determine exactly what that cognitive mechanism is.

“It is unknown how widespread this ability is at the population level, a question that should be addressed in future research. Furthermore, the precise mechanism by which animals reason through a nonverbal disjunctive syllogism requires detailed study.”

The most technically impressive feats of animation often strike us as eerie instead of impressive, and it’s all thanks to the uncanny valley.
Up Next
Hard Science