Study: Dogs as adept at empathy as young humans 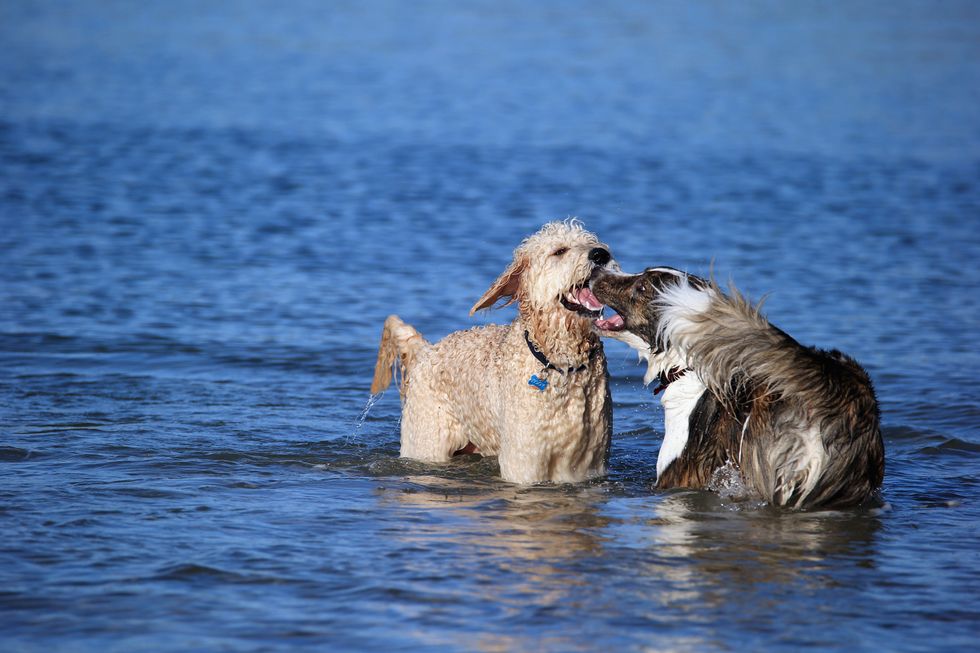 Two dogs, a Golden Doodle and a Border Collie mix play in the water on the north shore of Long Island at Coindre Hall on April 21, 2014 in Huntington, New York. (Photo by Bruce Bennett/Getty Images)

Dogs are fantastic. I could probably write an entire novel up top here about how great dogs are. On a scale of 1 to 10, dogs are 2,000. And researchers have evidence to back that up.

A recent study from the journal Learning and Behavior shows that dogs both feel and act upon empathy.

Thirty-four dogs—of which 16 were trained therapy dogs—and their owners were separated by a closed, opaque door. The dogs were hooked up to a heart-rate monitor to measure their stress levels. After a short while, the owners either hummed or gave a "distressed cry". Researchers measured how long it took for dogs to react. They found that dogs whose owners gave the distressed cry opened the door three times faster than those whose owners had just hummed. Their stress levels were raised, but only by enough to accomplish the task of opening the door.

Here's the key: the dogs suppressed their own feelings of distress and helped out. This is key because this is ultimately what young humans learn to do—rather, must learn to do—in order to help out (see the studies by Eisenberg et al., 1996 and Eisenberg & Fabes, 1990). You/me/dogs can't do anything when stress levels are matched with the person in stress, therefore empathy has to be attempted. (After all, what is the biological benefit of matching stress levels with someone in need?)

Funnily enough, the dogs whose owners hummed had no change in stress levels but instead opened the door out of curiosity. And the therapy dogs didn't open the door any quicker than the other dogs.

Want to see the experiment for yourself? Sure you do.

Dogs that could suppress their own distress were the ones who acted on their empathy and jumped into action. Julia Meyers-Manor of Ripon College, a co-author of the study, posits: "It appears that adopting another's emotional state through emotional contagion alone is not sufficient to motivate an empathetic helping response; otherwise, the most stressed dogs could have also opened the door. The extent of this empathetic response and under what conditions it can be elicited deserve further investigation, especially as it can improve our understanding of the shared evolutionary history of humans and dogs."

This display of empathy is to be expected, as dogs have been living alongside humankind for millennia. Dogs were first domesticated twice by humans around 12,500 years ago: once in Asia and once in what is now Western Europe. You can read the full study here, it's quite interesting.

And now, here are four minutes of dogs jumping on trampolines: