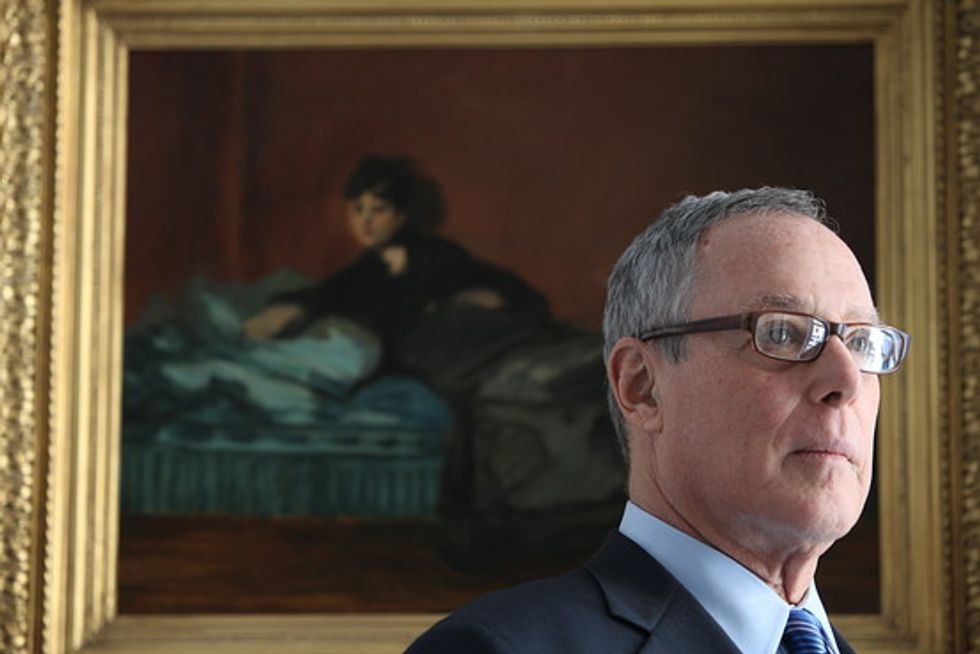 Interview of Asher Edelman by Chuck Wilbanks for The Deal Magazine

The euro has been verging on collapse, unemployment is high, the housing market low, an angry people have taken to the streets. And, oh yes, the art market is booming. Recent notable examples: A 1961 comic book motif painting by Roy Lichtenstein of a man looking through a keyhole, "I Can See the Whole Room! ... and There's Nobody in It!," set an auction record for the artist at $43 million. "Rhein II" — a monotonous, large-format print of the river under a gray sky by German artist Andreas Gursky — marked a new high for a photograph after it went for $4.3 million. All is well, it seems, at the most rarefied reaches of the art world.

That may be set to change, says Asher Edelman, the former corporate raider and activist who now operates Edelman Arts Gallery and finance service Art Assure Ltd., which aims to help facilitate transactions. Edelman, 72, says he is no longer a particularly active investor. "Most of my wealth, lack of wealth, whatever you want to call it — most of what I do and invest in today has to do with art."

He predicts that unpleasant economic realities are about to set in, and that while art will likely correct less and recover faster than other assets, no one will be immune.

Edelman's New York gallery traffics in artists ranging from emerging talents to blue-chip modernists. His booth in the recent Art Miami fair was centered on images of St. Sebastian, which he calls a "very interesting, modern and upbeat theme." In addition to a painting of the martyr by Titian, he displayed an ironic take on the punctured saint by Christopher Winter, featuring St. Sebastian as a schoolboy.

Edelman has also taken on a visible, almost professorial role as a supporter of the Occupy Wall Street movement, which he believes will provoke a shift to a more economically egalitarian society. Edelman spoke with The Deal magazine's Chuck Wilbanks about the art market, the economy and the accomplishments of the recent protests.

The Deal magazine: Where are we in the art market right now? Is this like 2008, when auction prices were soaring — just as Lehman Brothers collapsed?

Asher Edelman: We are in a place like we were in May of '08: The economy is struggling, and the art market will relate to the economy and to other markets some time in the near future.

So we're at a high-water mark?

There is an upper echelon of the art market that is about the copy cats, all of whom want the same thing, and it's very hard to predict when they won't want the same thing, because they have enough money to continue. Still, the art market follows the economy and stock markets. Though for the last 20 years, any reasonably broad index of the known art market clearly outperforms all the other markets, including gold, etc., that I can identify. And probably the art market will go down less and rebound more than the other markets. That being said, we're at or very close to a top in the art market because we are at or very close to a top in the stock market and in the economic world. We are due for another big bop. It's happening as we speak.

What do you think will be the effect of the monetary easing we just witnessed?

It will work in the same way that QE1, QE2 and the so-called twist did: little or no effect on the American economy. Reducing the discount rates will have very little effect on bank lending. It doesn't fix Europe at all.

You've been a famous financier; now you deal in art worth a great deal of money, and you're a supporter of the Occupy Wall Street movement. Does that pose any conflict for you?

There's no conflict whatsoever. I call it the "Save Wall Street" movement because it is the only thing that can save Wall Street from itself. This is the clearest that I can ever be in any kind of social, political or economic thinking: Every 30, 40, 50 years, there is a major swing from one social, political-­economic point of view to the other. What this movement has shown us, and will show us again, is that it won't be a dollar a vote. The politicians will begin to understand that regardless of how much money they are able to put together for a campaign, they will indeed have to satisfy the voters. The voters have not had a movement in 30 or 40 years that has informed them of what is actually going on.

What is actually going on?

Without value judgments, what is obviously going on is a transfer of wealth from the middle class and the poor to the rich. Period. The middle class and the poor constitute 99% of the population. And since that is the case, there is no question in my mind that very few politicians will be able to run for office without producing liberal fiscal spending plans, and backing them. You will see people moving from Tea Party points of view in Congress to becoming moderate Republicans. And you will see Obama, who has wished to be part of the establishment and has therefore, after being elected, acted very much like other people before him in order to remain in office and to have any power, will have to be a Rooseveltian figure and help Congress to have laws passed to revive this economy. To transform it into a somewhat — I don't like the word "fair" — a somewhat more equalized income stream for people because without that you cannot have a functioning economy or a functioning democracy.

How long will that take?

I did think it would take five to ten years, but I think that information is spreading more rapidly. I am setting up a program of papers, talks and panels to inform these people, the "save Wall Street" people, the Teamsters and so on, to inform them of exactly what the risks were that the banks took, exactly how they were paid back with your taxpayer money and exactly what should happen next — what they should look for among people running for office.

What do you think of the clearing of Zuccotti Park?

This was the silliest thing [Mayor Michael] Bloomberg could possibly have ever done. Politically and in every other way. He has risked the lives of the protesters and the police and has taken a risk that this all turns from protests to riot.

Do you have a hopeful scenario?

My hopeful scenario is very simple: that the American people will get so much behind these kinds of protests that there will be a fast rather than slow response on the political front. The people will get it, hopefully sooner rather than later, and everything we can do to help that happen we will do. There is no secret how you cure the economic ills. It's simple, been done, it works.

Are you referring to a Keynesian approach to fiscal spending?

Of course. And look, none of this is meant to penalize my friends. Some of my friends started this silly Tea Party thing.

What's the status of those friendships?

I can't talk to them anymore. I have nothing to talk to them about. But I liked them. They're nice people. It isn't that they mean anyone harm, it's just that they care only about themselves.